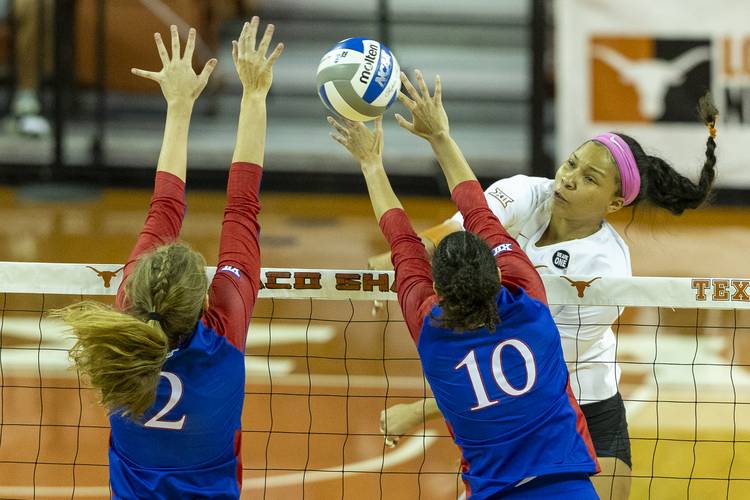 It’s not hard to spot Texas sophomore Skylar Fields on the volleyball court.

Look for the bright pink headband. Look for the No. 5 jersey that was previously worn by Texas All-Americans Molly McCage, Rachael Adams and Bethany Howden. Look for the 3.37 kills per game that rank second on the team and eighth in the Big 12.

Also look for the heel clicks.

If Fields is on the court when an ace is served by one of her teammates, she’ll leap and click her shoes together. It’s a celebration that dates back to her time at Ridge Point High School outside Houston. She decided to bring it back this season after watching Texas serve up 150 aces last year. She has tried to get other Longhorns to join her in the post-ace acrobatics, but “they’re nervous they’re not going to land it every time.”

“Any celebration that Skylar does is good,” said sophomore Molly Phillips, who was Fields’ roommate last year. “I’ll let her do her crazy things. I think it’s so funny.”

Earlier this season, middle blocker Brionne Butler noted that Fields “brings so much energy.” Fields knows that her energy is an asset. But she also has a pretty important on-court role.

Last year, Fields was honored as the Big 12’s top freshman. She averaged 2.51 kills per set while mostly attacking from the right side. She also had a .337 hitting percentage, which nationally was the 11th-best among freshmen.

Texas moved Fields to the left pin this fall. That meant that Fields needed to adjust her timing and range, UT coach Jerritt Elliott said. Attackers off the left side typically hit at a lower percentage than middle blockers and those playing Fields’ old position, he explained. However, Fields’ hitting percentage has only dipped to .335 so far this season.

“She’s really starting to create a really good toolbox in terms of how to score,” Elliott said.

Texas entered this season as the favorite in the Big 12. So far, the Longhorns have looked the part of a front-runner. Texas heads into home matches against Texas Tech on Thursday and Friday with an 8-0 record. Six of those wins have been sweeps. Junior Logan Eggleston has won three of the four Big 12 offensive player of the week awards.

Texas was challenged during last weekend’s trip to Kansas State. On Friday the Longhorns fell into a 2-1 hole but managed to stay unbeaten with 25-18 and 15-7 responses over the final two sets.

“It was fun, that’s what we really wanted,” Fields said. “We liked getting pushed. It’s fun when you can come back from behind and show a team, you thought you had us but we’re going to come back and fight harder. We really showed that we could do that as a team.”

Due to the coronavirus pandemic, UT is only playing conference contests this fall. The NCAA has announced a plan to hold a championship tournament in the spring, but plenty of unknowns exist. Elliott said this week that he hasn’t received much clarity about spring scheduling or even what a report date and practices will look like for his athletes.

The prospects of an NCAA tournament and making up for last year’s third-round exit is a carrot for the Longhorns. But right now, the team is focused on maintaining its prolonged supremacy in the Big 12. In eight of the past nine years, Texas has won at least a share of the conference’s crown. In the Big 12 standings, Texas owns a one-game lead over a Baylor program that it will host for two matches from Nov. 5-6. Texas and Baylor are currently ranked first and second in the AVCA’s fall poll.

“We are thinking about the spring, but we’re really just focused on these next couple matches in the fall,” Fields said. “These couple matches could determine how our spring season goes. We just want to focus there and let it lead up into the spring.”