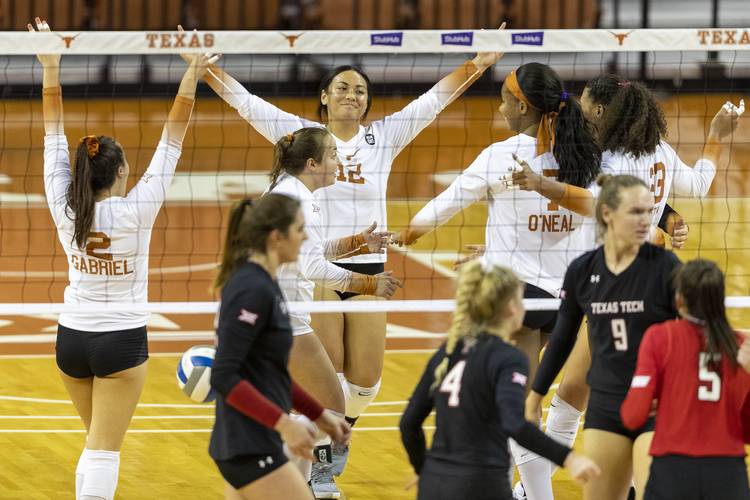 Texas players celebrates a point against Texas Tech during a volleyball match at the Erwin Center on Oct. 22, 2020. [Stephen Spillman for Statesman]

Now firmly in the middle of its 16-match schedule, Texas has recently been presented with a few midterms exams.

Last Friday, Texas found itself down by a set on the road. The Longhorns, however, bounced back and beat Kansas State in five sets. Test passed.

Six days later, the Longhorns were being outpaced on their own court by a spry Texas Tech team. Once again, Texas recovered. Another “A” effort.

“I think it’s really important how we’ve come out every single one of these games and seen what the other teams are doing and still played our game and found ways to win,” junior Logan Eggleston said.

Texas has now won 89 of the 100 matches in this series with Texas Tech. The Red Raiders last defeated Texas in 2000. Since 2010, the Longhorns have dropped a total of four sets to a rival it plays twice each year.

So when Texas did not trail in Thursday’s first game, it seemed like business as usual. The Longhorns then went up 12-7 in the second set. But Texas Tech (3-6) scored four straight points to force a Texas timeout. Following the stop in play, Texas Tech again added four consecutive points.

Molly Phillips eventually quelled the Red Raider run with a timely kill, but Texas was in a 15-12 hole. During that second-set stretch, Texas Tech scored off an ace and kills from three different players. The Longhorns also gave away a point with a bad set.

UT eventually regained its composure and the lead. Following a 17-17 tie, Texas pulled away. A kill by Brionne Butler off a wayward pass from Texas Tech completed the comeback.

After Texas Tech’s second 4-0 run, UT coach Jerritt Elliott opted to not call a second timeout. Elliott did depart the bench area to speak to his team, but he decided to let the Longhorns figure things out. Afterward, Elliott said that he felt UT still had control of the match. He would have used a timeout had Texas Tech scored another point or two.

“You’ve got the option to call a timeout, but sometimes you want your team to work through that a little bit,” Elliott said. “You get in those situations and how do we get out of it ourselves instead of the coach coming in and saving us. Then we side out at a higher percentage.”

By scoring 15 of the third set’s first 19 points, Texas quickly showed their guests the exit at the Erwin Center. Texas has yet to drop a set over its five matches at home this season.

Texas was led by Eggleston, who matched a season high with her 20 kills. Eggleston’s offensive outburst came just two days after she was not named the Big 12’s offensive player of the week. That marked the first time this season that Eggleston, a three-time winner, did not earn that award. (Baylor senior outside hitter Yossiana Pressley, the conference’s MVP this past season, was this week’s recipient).

Eggleston quickly reestablished her candidacy with 10 kills on 15 first-set swings. Eggleston, who came into the match averaging a Big 12-best 5.04 kills per set, added eight kills in the second set.

For the match, Eggleston hit a season-high .462. The All-American outside hitter had now led Texas in kills in each of its nine matches.

“She’s just becoming a complete player,” said Elliott, who has been Texas’ coach since 2001. “To put up those kinds of numbers tonight, 20 kills in three games. I don’t know, we haven’t had many of those in my time here.”

As a team, Texas hit .391 on Thursday. Junior setter Jhenna Gabriel directed the offense with her 38 assists. Asjia O’Neal recorded nine kills and a .615 hitting percentage.

Notes: Texas and Texas Tech will return to the Erwin Center at 6 p.m. on Friday night. … Texas Tech sophomore middle blocker Cadi Boyer, who attended Hutto High, started and had three kills. … Texas libero Morgan O’Brien recorded 15 digs. A graduate transfer from Illinois, O’Brien wore the No. 16 for the first time this season. She had been wearing the No. 44 while waiting for a black jersey with her preferred number to come in.