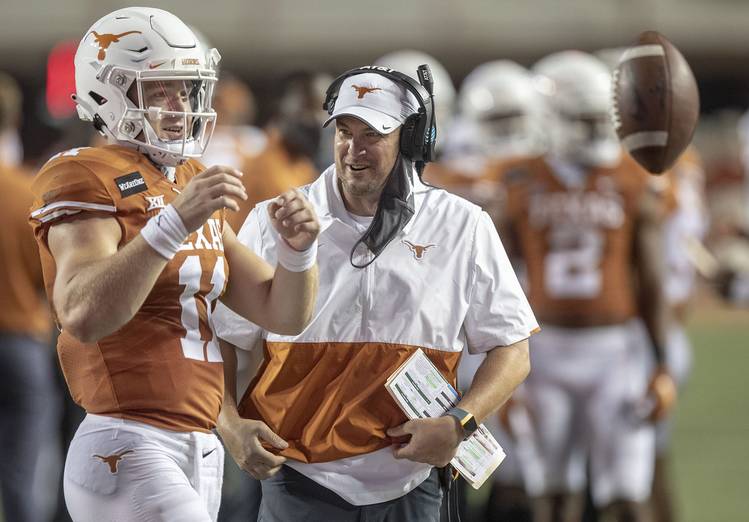 Texas coach Tom Herman jokes with quarterback Sam Ehlinger (11) during a time out against UTEP Miners during an NCAA football game in Austin, Texas on Saturday, Sept. 12, 2020. [RICARDO B. BRAZZIELL/AMERICAN-STATESMAN]

Sure, the new Royal-Memorial Stadium south end zone project looks big from the stands. It’s impressive in size and scale, no question. But standing on the 50-yard line, it looks dramatically bigger.

It’s hard to accurately describe how the towering new video board flanked by eight suites, new coaches offices and a ground-level party room looks from the field.

It can seem overbearing.

On Oct. 12, two days after the overtime loss to Oklahoma, Texas coach Tom Herman rattled off a long list of issues that needed to be addressed during the team’s off week. Offense, defense, penalties and special teams, nothing was spared. The Longhorns’ fixes may seem overwhelming.

Texas (2-2, 1-2 Big 12) has six games left in this abbreviated regular season, starting Saturday against Baylor (1-1, 1-1). Once again, the Horns are favorites at home, possibly because the Bears had to skip a week of workouts because of the coronavirus and haven’t played since Oct. 3.

Forget about “The Eyes of Texas” controversy for a moment and focus on the football. All eyes will be watching to see what, if anything, Herman and his coaches fixed during the off week. Did Herman, as he said, fix what’s fixable?

“I think we’ve got a lot of things we can build on,” Herman said this Monday. “The improvement in a lot of areas on defense, the confidence that everybody has in our quarterback and our offense.

“We’ve got to run the ball better,” he admitted. UT is averaging 178.8 yards per game, but a healthy portion of that is coming from quarterback Sam Ehlinger, not the running backs. “I’m not exempting that part of the offense. We do need to find ways to run the ball better. But I do think that there are a ton of bright spots in the last two games that we can definitely build on.”

Offensively, Herman simply has to point to scoring. Texas has badly needed an adrenaline shot on the scoreboard, and first-year offensive coordinator Mike Yurcich has delivered. Texas leads the nation in scoring at 49.5 points per game. UT hasn’t been that high since finishing the 2009 season ranked third nationally (39.3 ppg).

Yurcich stuck to generalities on Wednesday when discussing the off-week work. The offense had to be assignment sound and fundamentally sound. “Our guys have done a very good job of execution in these past two weeks,” he said.

But listen closer, and you can hear point of emphasis. “Too much inconsistency at that position, at the quarterback position right now,” Yurcich said. “It’s never perfect, and we’re never happy with it.”

Could Ehlinger have better numbers with a full complement of receivers? Hard to say. Jake Smith and Jordan Whittington have both taken turns getting injured. Whittington will be out a few more weeks with a hip flexor injury. Smith missed the OU game when he aggravated his hamstring in pregame warmups.

“Injuries are a part of the game, and they’re never an excuse,” Yurcich said.

Chances are Texas worked on ball security. Running back Keaontay Ingram lost the ball on back-to-back plays spanning two games. The Horns have lost three fumbles so far, one shy of matching the Big 12 high.

Shifting gears, the Texas defense leads the Big 12 with four fumbles forced. Overall, the Horns have landed themselves in multiple offensive shootouts and two overtime games.

Twice since the OU loss, Herman pointed to the overall defensive numbers at the end of regulation at the Cotton Bowl. With the score tied 31-31, OU was 6-for-15 on third downs and averaging 4.7 yards per play. Fans can disagree, but in the Big 12, that’s winning defensive football.

The Horns still aren’t getting any sort of consistent pass rush (five sacks in four games). Defensive coordinator Chris Ash said the linebackers, a unit that was thin to begin with, needs to get off blockers better and make more plays.

Texas ranks seventh in the league in total defense (400.3 yards) and eighth in scoring defense (36.3).

The special teams have been woeful. Not only has punter Ryan Bujcevski struggled and seen his punts blocked, opponents are averaging 10.1 yards per punt return. So, Bujcevski struggles to get the ball off with his rugby style approach and return men usually can work their way up field.

The penalty problem likely won’t be fixed in one week, even though Herman said he would implement punitive measures for those who commit silly mistakes. Texas ranks 70th nationally with 83.3 penalty yards per game; only 77 teams have played so far.

Everywhere you look, statistically speaking, this team is average. That is except for Ehlinger, who leads the Big 12 in yards per game and has a league high 16 touchdowns. Joshua Moore, Ehlinger’s No. 1 target, has five touchdown catches and will be looking for more.

Baylor coach Dave Aranda has a simple mandate, it would seem. Stop, or at least slow, Ehlinger and you can possibly beat Texas.

Aranda and Herman have been friends almost their entire adult lives. Neither coach wants to lose to the other. “I don’t have a whole lot of tendencies on Dave, except I know at 5:30 in the morning to not call him because he’s probably getting his yoga session in from 5:30 to 6,” Herman quipped.

Recovering from a 2-3 start would also stretch one’s imagination. Herman must find a way to stop his second-half slides. Every year he’s been at UT, the Horns have lost that next game after facing the Sooners.

The last time Baylor came to town, Charlie Brewer nearly stole the show with a last-second heave into the end zone. If the south end zone had been about one or two yards longer, the Bears would’ve won.

“Our guys know that if we stay together, that we continue to improve the way that we have,” Herman said, “that we’ve still have a very realistic opportunity to have a great season.”