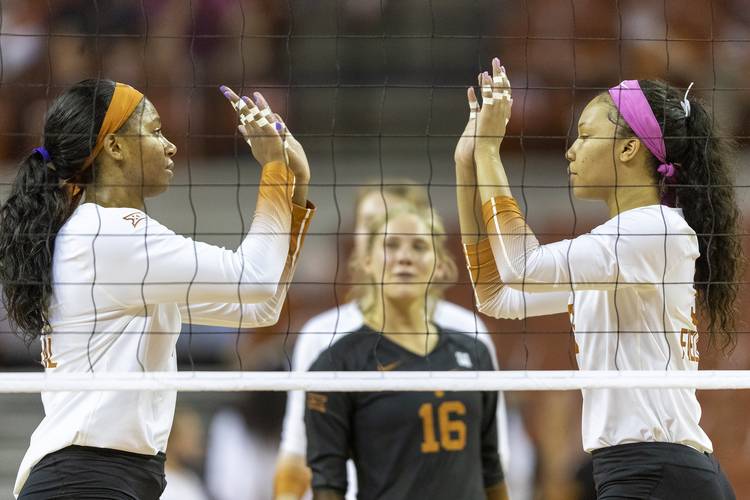 In what was an abrupt tune-up for its biggest matches of the season, Texas thrashed Texas Tech on Friday night.

Texas was supposed to travel to TCU next week for two matches against the Horned Frogs (1-5). On Wednesday, however, it was announced that four of TCU’s matches had been postponed “in accordance with Big 12 Conference volleyball match interruption guidelines.”

So, Texas is off until the first week of November. Texas will host Baylor on Nov. 5-6.

Last year, Baylor and Texas split the Big 12’s championship and were the top two seeds in the NCAA’s tournament. They ranked first and second in the Big 12’s preseason poll this June. Texas has long been the No. 1 team in the AVCA’s fall poll, which rates the best of the best from the Big 12, ACC, SEC and Sun Belt conferences. The No. 2 school? If you guessed Baylor, you guessed correctly.

“This being the last game heading into that (Baylor) weekend coming up is something that’s going to feel really good,” junior setter Jhenna Gabriel said. “It’s kind of nice to see everything come together, especially if it’s before your so-called biggest match. I just think we’ve been doing a really good job of treating every match like it is our biggest one.”

Baylor dropped its season opener, but the Bears entered this weekend’s trip to Iowa State with a seven-match winning streak. Texas, meanwhile, recorded its eighth sweep of the season on Friday night.

Texas also swept Texas Tech (3-7) on Thursday. A day later, UT cruised through a contest that featured only four first-set lead changes. Thanks to the seven kills posted by Skylar Fields, Texas shook off Texas Tech’s five service aces in the first set. The Longhorns then controlled the second game by scoring 10 of the session’s first 12 points.

In the third game, Texas quickly built a 5-0 lead behind three aces from freshman Nalani Iosia. Texas Tech never got closer than four points the rest of the way.

“We came in with the mentality that they’re going to come back stronger so don’t let up or don’t think little of them,” Iosia said. “We just put our foot on the gas and just went with it like we normally do. It was just fun to just get out there and do it and then leave.”

As a team, Texas hit .483 against Texas Tech. Throwing out the two attempts by Gabriel and fellow setter Ashley Shook, no Longhorn hit lower than Eggleston’s .324. It was the UT offense’s best showing since a .514 mark against Albany in last year’s postseason.

“It felt seamless tonight if I had one word to describe it,” Gabriel said. “It’s just one of those days where you wake up and you feel like ‘OK, it’s game day. Let’s go out and kill it.'”

Now, Texas enters a 12-day stretch without any opposition. UT coach Jerritt Elliott said he would have preferred to play TCU next week. The unexpected bye does have its benefits, though. Texas had already planned on not practicing the Tuesday ahead of the Baylor matches because of Election Day. Preparation-wise, the Longhorns can now trade that lost day for a found week.

Still, the Longhorns will get some rest. After the win, the players requested and received this Sunday off. Elliott said the team will then ramp up to harder practices over the next few days.

“Eddie Reese taught me, like at Texas you don’t always have to push, push, push. You’ve got to listen to your players,” Elliott said. “I allowed them to have a voice tonight and they spoke up.”

Notes: Iosia moved to the libero position in the third set. Texas had started Iosia as a defensive specialist in each of its matches this season, but this was her first appearance in the black libero jersey. … Fields added 11 kills with no attacking errors over her 16 swings for Texas. …Texas middle blocker Asjia O’Neal celebrated her 21st birthday with nine kills and a team-high six blocks. … Texas served a season-high nine aces.