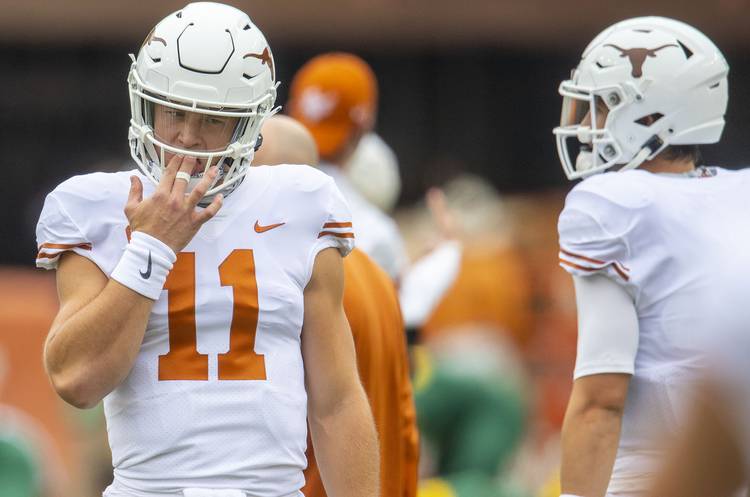 Revisiting our five pregame questions that were facing the Longhorns ahead of Saturday’s 27-16 win over Baylor at Royal-Memorial Stadium.

1. Did Sam Ehlinger get his first true win against Baylor?

The Texas quarterback can now say he’s beaten every school in the Big 12 during his career. He missed the 2017 win over Baylor in Waco and he was injured on the first possession of UT’s 23-17 win in 2018. Ehlinger did start against Baylor last year, but he threw for only 200 yards in a loss. He produced three total touchdowns in Saturday’s win.

2. Did Baylor look rusty after a long break?

Of course, Texas looked rusty too — for a quarter, anyway. But the Bears looked rough on offense, putting up an early field goal for a 3-0 lead but then were shut out for the second and third quarters. This was only Baylor’s third game; three of the Bears’ games have been either canceled or postponed because of COVID-19 issues, and they hadn’t played since Oct. 3.

Through five games, Texas’ only 100-yard rushing performance has come from Ehlinger, not a running back. It was more of the same against Baylor. Bijan Robinson got his first career start and finished with 55 yards on 12 carries, a team-best average of 4.6 yards per carry. Keaontay Ingram had 16 carries for 57 yards. Roschon Johnson was a non-factor, with one run for 1 yard. Ehlinger produced the only two rushing scores of the day. The Horns averaged 3.4 yards a carry as a team. Still, it was an improvement from the four-overtime loss to Oklahoma, when Ingram, Johnson and Robinson combined for only 29 yards on 11 attempts.

4. How much production did Texas get in the slot?

Jordan Whittington paced Texas with his 10 receptions in the Red River Showdown, but missed Saturday’s game with a hip flexor injury. Jake Smith is absolutely capable working out of the slot, but he finished with one catch for 14 yards on three targets. And Texas’ other two slot options, Brenden Schooler and Kai Money, didn’t have a catch. Ehlinger did throw to Schooler in the end zone once, however.

5. DId Jahdae Barron make a play against his former team?

The freshman cornerback didn’t end up making an appearance in the final stats. He actually signed with Baylor last December but was granted a release from his scholarship by Baylor following Matt Rhule’s departure and Dave Aranda’s hire. He later signed with Texas. As a backup, Barron’s stats have been minimal (two tackles, one pass breakup). He has recorded a huge highlight, however. Against Texas Tech, he scored a touchdown when he recovered a blocked punt.