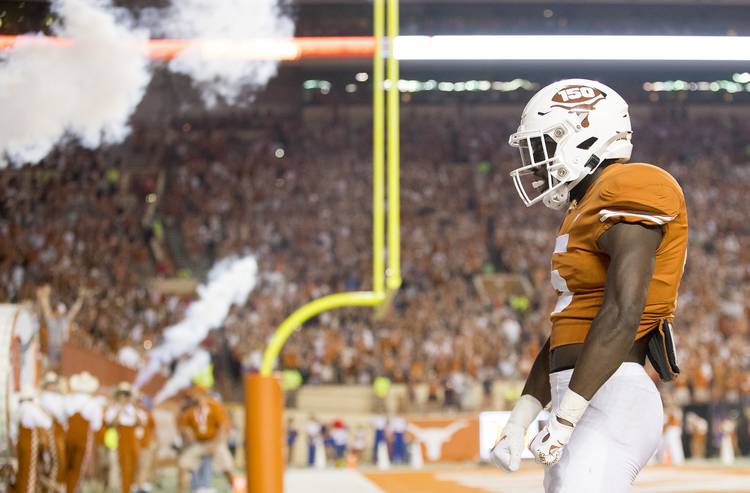 Texas defensive back D'Shawn Jamison (5) celebrates a score against Kansas on Oct. 19, 2019 in Austin. [RICARDO B. BRAZZIELL/AMERICAN-STATESMAN]

Five key matchups out of the Texas-Baylor game to keep your eye on Saturday:

Analyzing a matchup between Charlie Brewer and Sam Ehlinger might make more sense, but that’s been done annually since their junior years at Lake Travis and Westlake. How about a comparison between Brewer and his top target at Lake Travis? (Brewer and Brewer are not related). Charlie Brewer, whose dad and grandfather played at Texas, needs 2,254 more yards to become Baylor’s all-time leading passer. Cade Brewer has been quiet since his touchdown catch against UTEP, but Saturday will likely be the 18th start in the tight end’s career.

In another world, Cosmi and Bernard would have been teammates this season. In 2016, both players pledged to Tom Herman when the coach was at Houston. But after Herman got a new job, Cosmi followed him to Texas while Bernard found a home in Waco. Four years later, Cosmi and Bernard were voted onto the Big 12’s preseason team. Bernard now leads Baylor with his 21 tackles and 2.5 sacks. Cosmi, meanwhile, is set to make his 31st straight start for an offense that is averaging 495.3 yards, 49.5 points and 2.0 allowed sacks per game.

Jamison has started three times as a cornerback this season, while Ebner is averaging 5.8 yards per offensive touch. These players, though, may make their biggest marks on special teams. In his career, Jamison has scored on a 98-yard kickoff return, a 90-yard punt return and a blocked extra point. Jamison, however, hasn’t reach the end zone this season. In Baylor’s opener, Ebner had 83- and 100-yard kickoff returns for touchdowns. For his efforts against Kansas, Ebner won a Big 12 Special Teams Player of the Week award that Jamison last secured in 2018.

In 2019, Denzel Mims and Devin Duvernay combined for 17 catches and 203 receiving yards during the Texas-Baylor game. Mims and Collin Johnson were the leading receivers when these teams played in 2018. Since all three of those players were selected in the 2020 NFL Draft, new Bears and Longhorns must step up in the receiving corps. A redshirt sophomore who has scored on five of his 19 catches this year, Moore is now the top target at Texas. He has never played against Baylor. Sneed, a fourth-year junior, currently leads Baylor with his 11 catches.

Herman is 2-1 against Baylor, but this will be his first time facing a Bear team coached by Aranda. Herman and Aranda were teammates at Cal Lutheran in the 1990s. Aranda currently boasts bragging rights between friends since he was the defensive coordinator of a LSU team that beat Texas in Austin last year. Texas did put up 38 points and 530 yards in that game, though. Herman and Aranda also battled while they were the offensive and defensive coordinators at Ohio State and Wisconsin from 2013-14, and Herman’s Buckeyes put up 90 points in those two games.