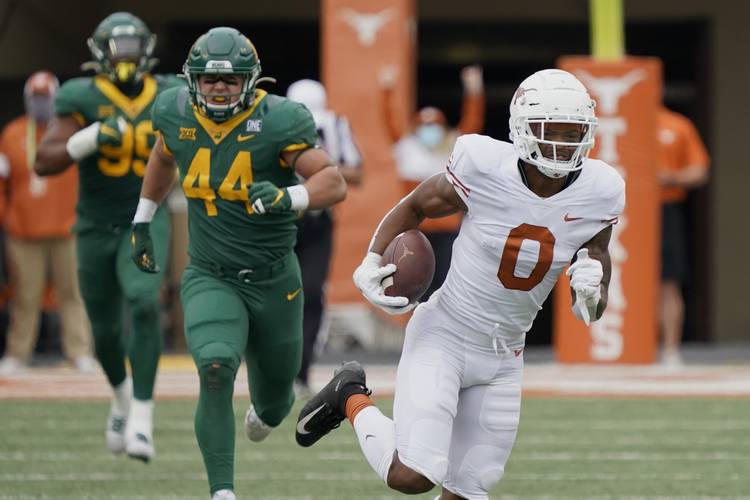 There were 135 snaps taken in Texas’ 27-16 win over Baylor on Saturday. Here are five that ended up making a big difference:

With a 3-3 tie on the scoreboard in the second quarter, Baylor seemed poised to grab its second lead of the game. The Bears had a first down at the Texas 28, but they lost yardage on their next two plays. On third down from the UT 30, quarterback Charlie Brewer threw incomplete.

Baylor coach Dave Aranda then made a puzzling decision. Instead of attempting a 47-yard field goal, Issac Power was sent out to punt. The kick resulted in a touchback, so Texas got the ball back at its 20. For the record, Baylor kicker John Mayers has made a 47-yard field goal this season. He also entered the game with misses from 46 and 48 yards, and he mishit a 43-yard attempt later in Saturday’s game.

“That was kind of a gut call by me to try to have our defense kind of pin them down and play the field position game,” Aranda told reporters after the game. “At that point, it felt like a field position game, and so we were trying to win that piece of it.”

Baylor took three of its first four drives inside the Texas 40. Those possessions resulted in only a 22-yard field goal.

At the beginning of Saturday’s game, Texas seemed determined to establish its rushing attack. UT was so committed to the run that senior quarterback Sam Ehlinger — who entered the weekend as the Big 12’s leading passer — had only two throws and minus-1 yard passing in the first quarter. By the time Texas scored its first points on a 42-yard field goal with 12:10 left in the second quarter, the Longhorns had called for a run on 14 of their 19 plays.

Texas finally aired it out on its fourth drive. After a first-down sack pushed Texas back to its 8-yard line, Ehlinger found an open Tarik Black. Baylor safety JT Woods ran down Black, but not before the graduate transfer from Michigan had picked up 72 yards. That long gain led to a tiebreaking field goal for Texas, and the Longhorns never relinquished their lead.

Black had been mostly silent since he caught five footballs and scored in UT’s opener. That was the longest reception of his collegiate career.

Black’s reception was the second-longest for a UT receiver this season. The longest was recorded by Joshua Moore, who turned the season’s first snap into a 78-yard touchdown. On Saturday, Moore added to his sophomore year’s highlight reel.

Near the end of the second quarter, Ehlinger took a deep shot at Moore. The 6-1 receiver was able to leap and high-point the football. He beat Baylor’s Mark Milton for a 42-yard reception.

“I’m a competitor,” Moore said. “When the ball’s in the air, it’s my ball. I just let my athletic ability take over from there.”

Two plays later, Moore again bested coverage by Milton for a 3-yard score. It was Moore’s sixth touchdown of the season. Since 2000, Moore and Jordan Shipley are the only Longhorns to catch six touchdown passes over the team’s first five games. During the 2008 season, Shipley had seven TD receptions during UT’s 5-0 start.

Up 13-3 at halftime, the Longhorns extended their lead with two touchdowns in the third quarter. Ehlinger finished off both of those drives with scoring runs. Baylor, meanwhile, punted and missed a field goal during the quarter.

The offense’s performance in the third quarter was a welcome sight for the Longhorns. Over its first three conference games, Texas had been outscored 38-14 in the 15 minutes after halftime.

Down 27-3, Baylor attempted to make things interesting in the final quarter. The Bears scored twice over the first eight minutes and then got the football back with 4:01 left.

But they could not cut into UT’s lead any more. On a fourth-and-7 from the Baylor 25, Brewer threw incomplete to receiver R.J. Sneed. Texas safety Chris Brown was credited with a pass breakup on the play.

Texas took over with 2:19 remaining. Baylor still had three timeouts, but the Longhorns killed the clock and secured a win that snapped a two-game losing streak.