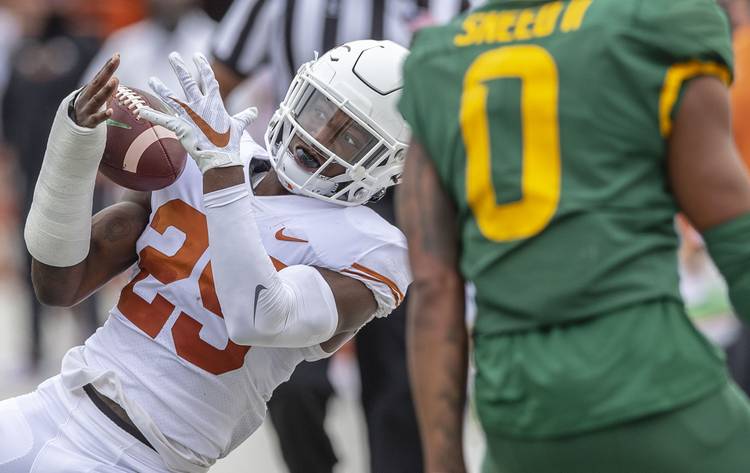 Texas’ 27-16 win over Baylor on Saturday stopped the bleeding after back-to-back losses to TCU and Oklahoma. It also served as a snapshot: On the Monday after the OU loss, Tom Herman laid out plans to take the open week and this week to fix what was ailing the Longhorns — the running game, the offensive line play and the pass rush, among others.

How did those fixes translate to the field?

Sam Ehlinger was pedestrian. The senior quarterback finished with 270 yards, a touchdown and an interception on 15-of-23 passing. He added 51 yards and two touchdowns on 15 runs. He wasn’t allowed to get into a rhythm early in the game because of his own offensive coordinator; the Longhorns threw only twice in the first quarter. Ehlinger completed one of those for minus-1 yard. He looked hobbled, or at least hurting, toward the end of the game. He’s graded harder because of expectations. The stats suggest he played a solid game, but those who have watched him know he wasn’t at his best on Saturday.

Bijan Robinson earned his first career start with Keaontay Ingram bitten by the fumble bug and Roschon Johnson working his way back from injury. Robinson averaged a team-best 4.6 yards a rush, finishing with 55 yards on 12 attempts. Ingram led the team with 16 carries for 57 yards. Johnson carried the ball just once. The team averaged only 3.4 yards per carry. The longest gain by a running back was 12 yards. Ingram and Johnson each caught one pass.

Take away Tarik Black’s 72-yard blown coverage completion and the 42-yard pass to Joshua Moore, and the wide receiver group was once again underwhelming. The group can’t get separation, and that trend continued against Baylor. Black was left wide open on the 72-yard catch, which ended up being his only catch. He still led the team in receiving yards. Brennan Eagles led with four receptions. Moore recorded the only touchdown catch. He finished with two receptions for 45 yards.

Jared Wiley is emerging as this team’s best tight end. The group accounted for three of UT’s 15 receptions. Wiley finished with two catches for 70 yards. Cade Brewer registered one catch for 10. The Longhorns used two tight end sets a lot as the team attempted to establish the run. Wiley and Brewer held their own as blockers.

Go figure: Wiley is UT’s fourth-leading receiver with 147 yards on six catches, but doesn’t have a TD yet

The improvement was visible for this group, especially at right tackle, where Christian Jones continues to progress. Ehlinger was sacked two times and the team finished with 182 yards rushing. The Longhorns will take those numbers considering the line’s struggles early in the season. Derek Kerstetter did commit a bone-headed personal foul penalty for the second straight game; his out-of-bounds shove in the fourth quarter could have been pivotal had Baylor capitalized on the field position. The left side of the line led by Samuel Cosmi continues to be the go-to side for the rushing attack.

Texas turned in its best defensive performance of the Big 12 season, with the success starting with a strong performance from the line. Jack end Joseph Ossai was starting to take over the game before the injury at the end of the first half. Moro Ojomo picked up the team’s only sack, but Baylor quarterback Charlie Brewer was under constant pressure. It was a group effort once Ossai exited the game. Jacoby Jones finished with four tackles and a pressure. Ta’Quon Graham had a tackle for loss. True freshman Alfred Collins continues to impress. T’Vondre Sweat posted a pair of tackles while nose guard Keondre Coburn knocked down a Brewer pass in the second half.

Go figure: Texas has forced four fumbles this season; Ossai has two of them

Saturday was a good step forward for the group. Middle linebacker Juwan Mitchell played his most complete game yet for Texas; the junior college product finished with a team-high 12 tackles, twice as many as the next closest Longhorn. Two of those 12 tackles were for loss. De’Marvion Overshown was third on the team with five stops. Linebacker is considered the weakest spot on the defense, but the two starters held their own with 17 combined tackles and more consistent play against the run and the pass. It felt like the group missed fewer tackles than we’re used to seeing.

Texas probably should’ve recorded two or even three interceptions in the first half alone. But as the old saying goes, “that’s why defensive backs don’t play wide receiver.” B.J. Foster was second on the team with six tackles, including one for a loss despite playing with a cast on one of his arms. He also broke up a pass. Chris Brown broke up a team-high three passes, one of those coming in the end zone — the Bears ended up settling for a field goal. D’Shawn Jamison and Chris Adimora also broke up throws. Adimora and Caden Sterns finished with five tackles. Jalen Green and Josh Thompson had three stops.