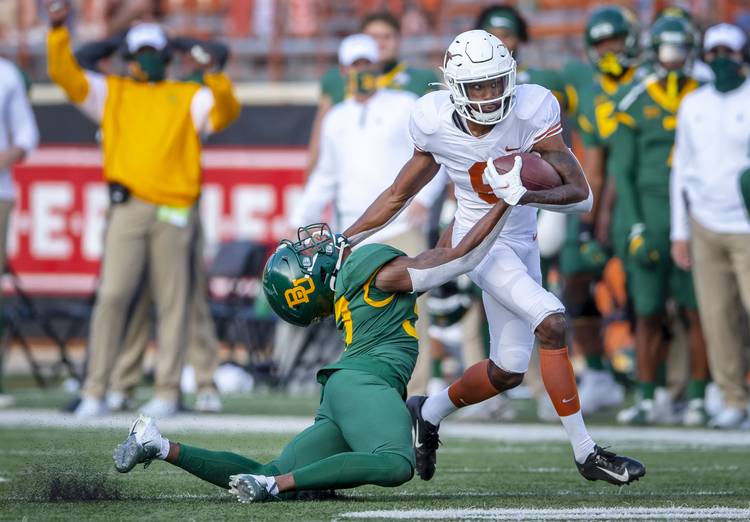 Halfway through this 10-game regular season, Texas could easily be sitting here today 1-4 or 4-1. The Longhorns could be considered a top-15 program. Instead, they’re unranked at 3-2.

This entire season thus far boils down to three plays: an onside kick at Texas Tech, a goal line fumble against TCU and a last-gasp interception against Oklahoma.

“I think over the past few games, we’ve shown that we’re capable of pretty much anything, whether that be good or bad,” quarterback Sam Ehlinger said after Saturday’s 27-16 win over Baylor. “We know that and we know that’s in our control.”

Ehlinger added that “when we stay out of our way, we’re pretty darn good.”

Beating Baylor probably shouldn’t be celebrated too much. The Bears hadn’t played since Oct. 3 and couldn’t even practice a full week because of a COVID-19 breakout. That said, Texas will pocket the win and move along.

The Longhorns (3-2, 2-2 Big 12) now must decide what they truly wish to be. Does this team want to be a Big 12 title contender? Or does it want to be a middle-of-the-pack team for the umpteenth year? This week’s trip to sixth-ranked Oklahoma State (5-0, 4-0) will be a huge barometer of which way things are headed.

Mike Gundy’s bunch is the only undefeated team left in the Big 12. Kansas State (4-1, 4-0) is also still perfect in league play, though. Texas still controls its own destiny, to be sure — the Horns have yet to play all three teams ahead of it in the standings: Oklahoma State, Kansas State and Iowa State.

But, they’re also a group with little margin for error.

By beating Baylor, Texas turned down the outside noise. It was a week where the state’s lieutenant governor stirred things up on Facebook about the Longhorn band. A plane flew over Royal-Memorial Stadium promoting a fan site that supports keeping “The Eyes of Texas.”

As requested by UT administrators, the entire team stood together on the field afterward for “The Eyes.” Some held up their “Hook ’em” hand signs, some didn’t. Most importantly, the group did it together.

By doing that, the Horns signaled “The Eyes” issue is no longer an issue at all. Do band members see it that way? That’s a problem for the Butler School of Music and those in the Tower.

“We made a decision as a team to stand out and sing ‘The Eyes,’” Ehlinger said. “And so, moving forward, I would assume that that’s what it’s going to be. And we’re just looking forward to getting better. Big opponent this week.”

It never appeared “The Eyes” was dividing the team internally at all. If anything, flying a plane overhead and using a player’s name to promote one side only creates division within the fan base.

Winning only happens when everyone is rowing the same direction. To that end, head coach Tom Herman said, “I would like to think that our players are trained to drown out the noise.”

Mute the noise and look what happened on the field. Plenty looked constructive.

Herman started freshman running back Bijan Robinson to jolt the running game. He averaged 4.6 yards on 12 attempts. The Horns went with Keaontay Ingram in the second half, though. He had similar totals: 3.6 yards per carry on 16 attempts. Ehlinger had the longest run of the day, a 19-yard scramble.

Herman said backup running back Roshon Johnson reminded teammates at halftime  “of the emphasis that we’d been placing on it and again really proud of the way our kids responded.”

Texas’ linebackers made more plays. Juwan Mitchell had a team-high 12 tackles and two tackles for loss. DeMarvion Overshown had five tackles and a pass breakup.

And more defensive linemen had their name called. Jacoby Jones had four stops, Moro Ojomo had a sack, T’Vondre Sweat and Ta’Quon Graham both made plays. Keondre Coburn also broke a pass up at the line of scrimmage. It should be noted Baylor was without two starting offensive linemen, and Texas still had only one sack.

“Fitting into this new defense is definitely a different feel to it,” Graham said. “And I feel like everyone’s settling in and we’re starting to play ball how we should.”

Texas’ best pass rusher, Joseph Ossai, left the game briefly with a shoulder injury when he collided with Jones. But he returned in the fourth quarter, and Herman said he should play in Stillwater.

The Horns played a cleaner game, too. Texas had a season-low five penalties for 50 yards. Herman had said there would be punitive measures implemented for inexcusable mistakes.

Maybe the Horns just caught the Bears at the perfect time. Perhaps Baylor would’ve been tougher if the pandemic hadn’t disrupted things in Waco.

“You know, I’m really excited to see what we do in the future,” receiver Joshua Moore said. “And I think it’ll be something special for sure.”