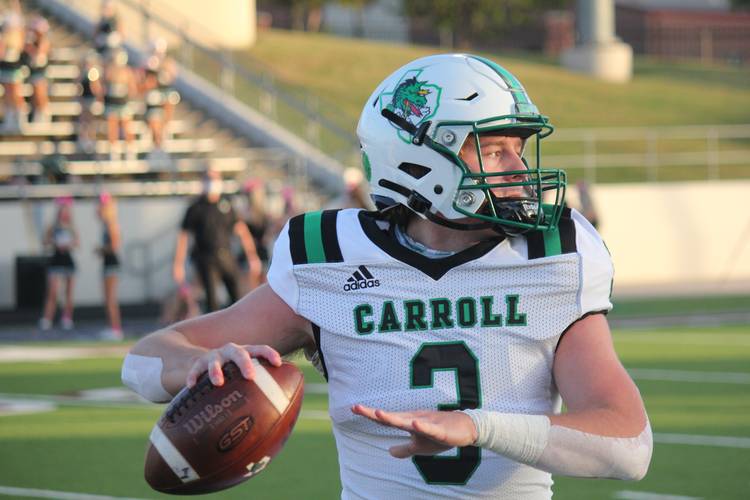 Five-star Quinn Ewers is the top-rated quarterback in the 2022 recruiting cycle. (Mike Craven)

SOUTHLAKE — Quinn Ewers is regarded as one of the best high school quarterbacks that has come from the state of Texas in recent memory. The five-star Southlake Carroll product entered his junior season as the top-rated quarterback in the entire 2022 class. He’ll become the first player from the state to earn that distinction since Houston Madison’s Vince Young more than 15 years ago. There have been only three other Texans who were five-star quarterbacks since 2000.

Ewers, who has committed to Texas, isn’t moved by the hype.

“Recruiting has slowed down a whole lot. I have more time to focus on bringing a ninth state championship to my hometown,” Ewers said after Carroll’s win over Byron Nelson last Thursday. He accounted for 222 yards passing and four total touchdowns. “I try to respond to a couple of coaches every now and then, but I’m committed to Texas and I don’t plan on changing that.”

“He’s not about that life,” Dodge said. “He could’ve drug it out throughout his senior year and announced at an all-star game to get a bunch of attention, but that’s not who he is. He stayed true to himself and that is admirable, especially in a young person who received so much attention.”

Texas coach Tom Herman must do two things over the next 18 months: Win and keep Ewers committed. Like Young helped Mack Brown get over the hump in Austin, Herman needs Ewers to provide a jolt of energy on the recruiting trail. Texas’ 2021 class ranks 17th in the nation and is on pace to be the first UT class to rank outside of the national top-10 rankings since 2017, the class that Herman inherited when he was hired two months before national signing day.

“I’m 100% committed,” Ewers said. “I have faith in the coaches to get it rolling. They’re still building. It’s only been five games under a new system.”

Ewers believes the players, including the recruits, are more understanding toward the plight of the new coaching staff than the fans are.

“The people tweeting about coach Herman don’t play the game,” he said. “They don’t know what is going on inside the field house. Sometimes, you need to take a step back and look at it from a different perspective.”

“There are more concepts this year. It was mostly one-man routes last year,” Ewers explained. “He’s a good play caller.”

COVID-19 added a new wrinkle to the season. The fate of the season was in limbo for much of the summer. Southlake Carroll postponed a marquee matchup against Denton Guyer two weeks ago due to an outbreak. As the quarterback, Ewers is one of the team’s leaders. It’s a role he’s growing into as an upperclassman.

“He’s got a unique way to lead. He’s not going to get in your face. He’s more comfortable leading by example,” Dodge said. “He pulls guys into the film room like the older guys did for him when he was the young guy.”

Ewers’ demeanor is a trait Dodge believes is understated when it comes to Ewers’ ability.

“Obviously, everyone sees the skill set and the size, but he is just so cool, calm and collected,” Dodge said. “It’s special to find a guy of his talent with that type of mental makeup. He has strong intangibles and that separates him from a lot of peers.”

Ewers doesn’t have any peers in the 2022 class. He’s in his own class. As a sophomore, he led Carroll to the state quarterfinals before falling to Ja’Quinden Jackson and Duncanville. It was Carroll’s only loss that season. Ewers passed for more than 4,000 yards and was named the MaxPreps national sophomore of the year and the District 5-6A overall MVP.

The scariest part? Ewers admits he wasn’t that fantastic at reading defenses as a sophomore.

“I know what is going on in the back end than I did last year. It’s slowed the game down and made things a whole lot easier,” he said.

“He’s come a long ways on his defensive recognition, pre- and post-snap,” Dodge said. “As a sophomore, he was out there with some older guys and could concentrate on his job. This year, we have some younger guys around him so he needed to take ownership of the complete offense. He’s been dialed into what the defense wants to do to us.”

As for recruiting, Ewers’ advice to the next group of talent wasn’t a surprise considering his approach to outside distractions.

“Just play,” he said. “The attention and offers will come.”