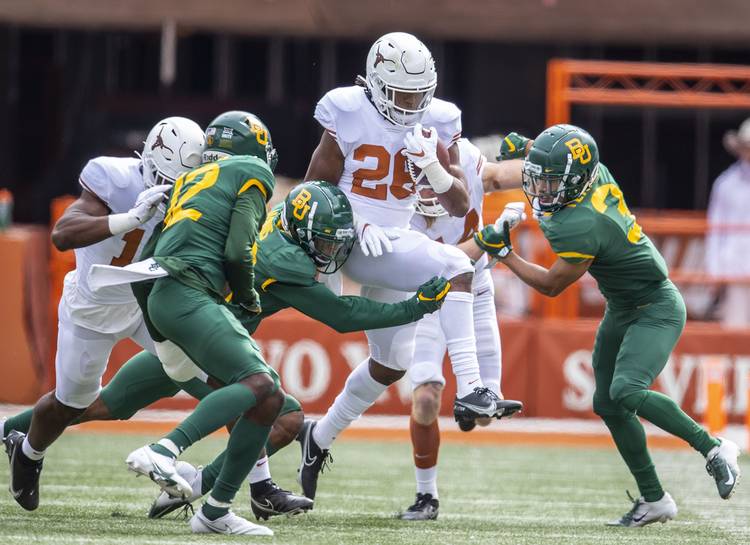 Texas running back Keaontay Ingram (26) fights for yardage against a trio of Baylor defenders on Oct. 24, 2020 in Austin. Ingram led UT with his 57 rushing yards. [RICARDO B. BRAZZIELL/AMERICAN-STATESMAN]

If the team lacks a once-in-a-generation talent, it’s probably not ideal.

Texas’ Sam Ehlinger is a lot of things, but he’s not Vince. And yet, the senior is the Longhorns’ leading rusher halfway through the season with 293 yards and seven touchdowns.

The school that unleashed Heisman winners Earl Campbell, Ricky Williams and even a Doak Walker winner the same year a coach got fired now uses a three-man rotation. And there are no signs of that changing. It’s led to erratic production, something that will hamper UT’s long-term chances if the Horns can’t find consistency.

The numbers say Texas (3-2, 2-2 Big 12) has the third-best rushing attack in the Big 12. The Horns average 174.8 yards per game. A majority of those come from Ehlinger. Defensive coordinators simply need to bottle him up and take their chances against UT’s tailbacks.

Running the ball and eating clock will be critical this week against No. 6 Oklahoma State (4-0, 3-0). The Cowboys have the league’s second-best defense (303.0 ypg) and rank 32nd nationally against the run.

“A lot of things can be skewed by statistics,” said UT coach Tom Herman, who spent his entire Monday press conference answering football-related questions. Not a single query was related to the school song, bringing relief to those in the Tower.

“I thought we took a big step forward on Saturday against Baylor to have two running backs combine for over 100 yards,” Herman said. “I thought it was our best day yet running the football from that position. Got to be a little bit more consistent. I didn’t like the zero, one, negative-one yard runs. And then we got an eight-yard run, a nine-yard run, a 12-yard run.

“But no, I don’t think there’s any cause for concern,” he added. “And I think we’re all on the right track when it comes to continuing to try to improve the run game.”

Running backs coach Stan Drayton continually rotates his top three rushers throughout the game, usually changing them each series. By doing so, it keeps them fresh, but it also limits each player’s ability to find any rhythm.

“When you got a guy that is a bell cow, you’re going to play him a bunch,” Herman said. “When you got a bunch of guys that have earned the right to play, and nobody has separated themselves from one another in terms of production or ability level, then I think the prudent thing to do is to keep everybody fresh.”

Herman and the coaches may have trust issues. Junior Keaontay Ingram fumbled at the 1-yard line against TCU and then fumbled on his first carry the following game against Oklahoma. Ingram later caught a two-yard touchdown pass that tied the game 31-31 and forced overtime.

Sophomore Roschon Johnson showed last year he’s a dynamic athlete. He hurdled a would-be tackler in the open field and jaws dropped. But he came to Texas as a quarterback and wanted to go back to quarterback when the season ended. Coaches kept him at running back.

True freshman Bijan Robinson got his first start against Baylor. The five-star recruit from Tucson, Ariz., was thought to be one of the best running back prospect in the nation — a potential “bell cow.”

Collectively, Ingram, Johnson and Robinson are averaging anywhere from 4.3 to 4.8 yards per carry. Johnson is the only one in the group that’s scored a rushing touchdown. For any of these three to have breakout numbers, someone will have to break a long run, considering how they’re rotated.

None of the tailbacks have been made available for interviews this season.

“Again, not having a true bell cow guy that has head-and-shoulders separated himself from from the pack,” Herman said, “it’s just a wise thing to do to keep these guys fresh and allow guys that have earned the right to play that right to get on the field.”

The Longhorns’ three tailbacks have 510 yards collectively, an average of 102 yards per game. That would be an impressive per-game average for one player, but not three.

“We know who we are in the run game, we know what we want to major in, we know what our base plays are going to be,” Herman said. “It’s now a matter of fine tuning those.”

At Texas, Ehlinger must be a part of the running game to make the offense go. There’s no signal that coaches will let Ingram, Johnson or Robinson suddenly have more carries than another. So this is how it goes the rest of the season, most likely.

Last season, Herman was begging for someone to just stay healthy at running back. So he’ll take three and be happy, for sure.

“Other than getting asked why your quarterback is your leading rusher? There are no downsides to that,” he said.