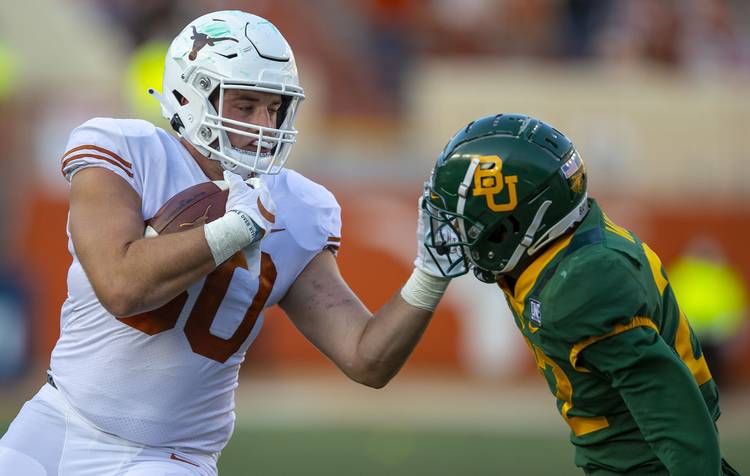 Late in Texas’ 27-16 win over Baylor last Saturday, senior Cade Brewer was told to “grind to the five.”

Assistant coach Stan Drayton’s sideline mandate meant to stay in bounds and not score. Texas wanted to finalize its third win of the season, but some time was still left on the clock. So when Brewer hauled in a 13-yard pass on fourth down, he took those words into consideration. He had a pathway to the end zone. The veteran tight end instead gave himself up at the Baylor 4. Texas then ran two kneel-downs to end the game.

When asked three days later if he was owed a touchdown, Brewer didn’t think so. A win that snapped a two-game losing streak was good enough.

“It is what it is,” Brewer said on Tuesday. “I don’t really care about stats and all that. If we get the dub, that’s all that matters to me.”

To be fair, it was not like Drayton’s instructions prevented Brewer from scoring what would have been his first career touchdown or anything. Three years ago, Brewer had a game-tying touchdown at USC. He has recorded touchdown catches against UTEP and Kansas. Last season he scored on a trick play against Oklahoma State, which hosts Texas this weekend.

Brewer’s senior season has thus far consisted of six catches and 65 yards. Last week, Texas started both Brewer and fellow tight end Jared Wiley against the Bears. Two of Wiley’s six catches in 2020 have covered 52 and 47 yards. Wiley and Brewer are among 11 tight ends who have recorded a catch of more than 50 yards in Texas’ history. (Brewer covered 51 yards in a 50-48 win over Kansas in 2019).

Said quarterback Sam Ehlinger: “It’s a luxury having such a talented tight end room. You look in the NFL and you see what those guys are doing. It’s a lot of really big bodies, big tight ends. It creates matchup problems in the secondary. You can also flex them in and have a solid run game because they’re versatile.”

Brewer was asked about the qualifications for playing his position at UT. In his mind, on-field intelligence is the top trait of a Texas tight end. Making plays in the passing game is another must. And since he likened his role to “a fullback almost in the NFL,” physicality is another key.

For Brewer, that physicality has been an acquired trait. He weighed only 205 pounds when he won a state title in his final game at Lake Travis. Over the past few years, though, he has packed on the pounds while learning how to play in the trenches.

“I didn’t really block much in high school. I wasn’t a very good blocker,” Brewer said. “When I came in here, it’s definitely improved.”

On Saturday, Texas (3-2) will be on the road for its toughest test of the season. Oklahoma State (4-0) is ranked sixth in the Associated Press poll.

Can Texas upset the Cowboys? Brewer thinks so. He was quick to point out that Texas isn’t that far removed from beating No. 11 Utah in last year’s Alamo Bowl.

In that 38-10 triumph, Texas played well on offense, defense and special teams. The Longhorns rushed for 231 yards, recorded five sacks and had a 71-yard punt return. Brewer, however, said the key to beating the Utes was having a selfless attitude. Fitting words from a player who sacrificed a touchdown just a few days ago.

“At the Alamo Bowl, we all left our egos at the door and look what happened,” Brewer said. “If we do that, it can happen that way in Stillwater this weekend, too.”