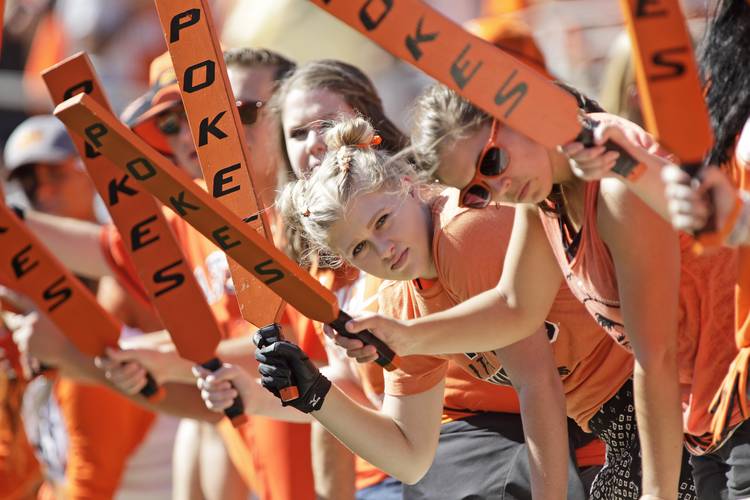 Oklahoma State Cowboys fans during the game against the Baylor Bears at Boone Pickens Stadium on October 14, 2017 in Stillwater, Oklahoma. Photo by Brett Deering/Getty Images

Five games into this season, Texas coach Tom Herman concedes that his Longhorns have yet to play their A-game. “Well, we haven’t this year. That’s for sure,” he said. “But we’ve got it in us. I know we do.”

Pennywise can’t believe it, either. Freddy Krueger and Jason are old enough, they’re just numb to it all by now.

Boone Pickens Stadium is sure scary all right with its tight sidelines and wall-paddling fans. Texas has to go in there on Halloween and scare the dickens out of sixth-ranked, undefeated Oklahoma State. If things go awry for the Longhorns, the rest of this season may not be suitable for children.

“I think we’re headed toward our A-game and hopefully show up and deliver our A-game in Stillwater,” Herman said, “because we’re going to need it.”

Saturday afternoon is something of a make-or-break moment for the 2020 Horns. Fortunately for UT, the OSU noise level will be curtailed thanks to social distancing and reduced stadium capacity.

Texas (3-2, 2-2) can stay in the Big 12 championship race with a victory. The Cowboys (4-0, 3-0) are merely three-point favorites at home, which means it’s essentially a tossup. Oddsmakers know what UT fans know; this team routinely plays up or down to its opponent.

But there’s something about this environment that’s been giving UT fits recently. Oklahoma State has won seven of the last 10 games in this series. It’s a huge credit to coach Mike Gundy’s ability to take lower-rated recruits and coach them up.

In 2016, Texas fell behind 14-0 early through the first quarter. The tackling was so atrocious that then-coach Charlie Strong took play-calling duties away from defensive coordinator Vance Bedford during the game. Three extra points-were blocked, and one of those was returned the other way for a score.

The 49-31 debacle signaled the beginning of the end for Strong.

Then in 2018, Texas experienced an all-around bad night before a packed house and lost 38-35. The Horns’ six-game winning streak was snapped, but most fans remember Herman charging onto the field to yell at Gundy. Both coaches later said it was a genuine misunderstanding.

Fast forward to today. The Horns lack a true offensive identity, what with their three-man rotation at running back and constant change at receiver. Quarterback Sam Ehlinger has perfected the art of talking to reporters while saying nothing controversial. But when asked about the receiver rotation this week, he said, “It’s definitely difficult.”

Joshua Moore has clearly become Ehlinger’s go-to choice, much like Devin Duvernay was last season. Moore has a team-high 21 catches for 328 and six touchdowns. No other player comes close to those numbers; Brennan Eagles has three touchdown receptions. And yet Moore is not on the field the entire game.

“It is challenging to build consistent chemistry with the by-committee that we have going on,” Ehlinger said, “but I think they’ve done a great job of alleviating that for me and just being really good.”

The Longhorns are still tied for sixth nationally in scoring (45.0 ppg) but that average is skewed by two overtime games. The Cowboys are averaging 28.5 points per game.

“We have a lot of things to clean up,” Ehlinger said. “There always seems to be a period of time when we’re not playing our best football. We haven’t played a complete game yet.”

So what needs work? “Just really everything,” he added.

The Texas defense is another funhouse of mirrors.

The Longhorns have only seven sacks this season, but Herman said that’s “a misleading stat.” He believes “we have affected the quarterback more in our four conference games than in our previous two years combined.”

Texas averaged 2.3 sacks per game in 2018-19; this year, it’s 1.4. The defense averaged 2.4 quarterback hurries per game those two seasons; this season, it’s 2.0. New defensive coordinator Chris Ash said, “There’s nothing simple about playing defense in this day and age.”

Said Graham: “It might not show up in the stat book, but we’re definitely getting hits on the QB and definitely affecting throws.”

They’ll have their hands full with Hubbard, Wallace and quarterback Spencer Sanders, who returned from injury last week. Stopping those three would fuel a Texas upset and stop the bleeding that’s happening off the field, too.

It puts a serious hole in Texas’ 2022 recruiting plans as Ewers was expected to lure other blue-chip recruits to Austin.

Herman is 2-6 against top-10 teams in his four seasons in Austin. Despite three top-10 recruiting classes, his program is once again battling for its Big 12 life with a .500 league mark four games in.

Getting blown out in Stillwater won’t help matters. This program is so unpredictable, Texas is likely to come out and finally play its A-game.

Texas’ self-inflicted wounds are a horror show themselves at times.

“I think we’re taking the steps necessary to get that done,” Brewer said. “I’m excited to see what’s going to happen on Saturday.”