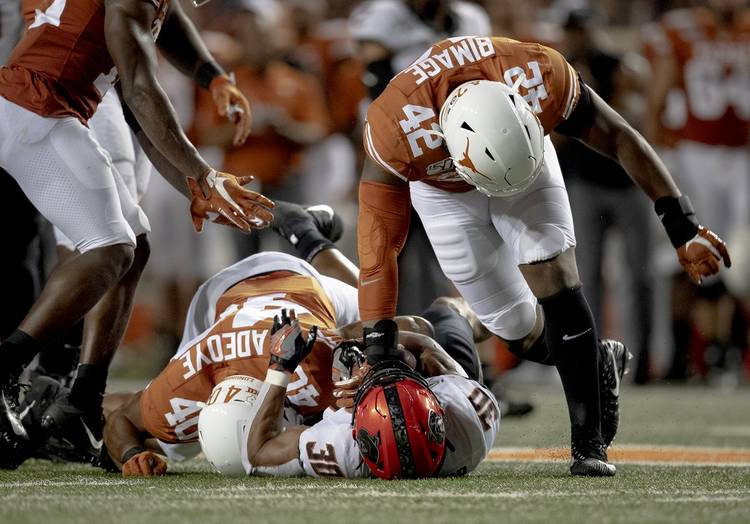 1. Will Texas scheme up another way to slow down Chuba Hubbard?

Hubbard was a finalist for the Doak Walker Award last season after leading the nation with 2,094 rushing yards. One of his 12 100-yard games came against Texas, but he needed 37 carries to get his 121 yards in a Longhorns victory in Austin. Wipe that game off Hubbard’s 2019 stat sheet and he averaged 6.8 yards per carry in 2019. This year, Hubbard is averaging 5.1 yards. Texas’ rushing defense ranks fifth in the Big 12. Oklahoma’s T.J. Pledger and Texas Tech’s SaRodorick Thompson have topped the 100-yard threshold against the Longhorns so far.

2. What about the Texas running game, though?

While Hubbard is the star of Oklahoma State’s running game, Texas has decided to use an ensemble cast in its backfield. Keaontay Ingram, Roschon Johnson and Bijan Robinson have all gotten touches, but nobody has stood out. Quarterback Sam Ehlinger has the only 100-yard rushing performance this season, and the best effort for a running back so far was Ingram’s 89 yards against Texas Tech. Texas is averaging the third-most rushing yards in the Big 12, so this strategy is working for them. But will one back step up to battle Hubbard one-on-one?

3. Will Joseph Ossai be available? And effective?

Ossai injured his shoulder in last week’s win over Baylor. On Monday, Tom Herman said Texas’ jack defensive end had suffered an anterior capsule sprain. He expected a brace-wearing Ossai to practice this week. Herman went as far as to say that “I would be pretty surprised if we did not see Joseph Ossai play a significant part in this football game on Saturday in Stillwater.” Despite missing most of last week’s second half, Ossai still leads Texas in tackles (34) and forced fumbles (two) this season.

4. Who will haul in UT’s longest catch?

Texas has had four different players record a catch of at least 50 yards. No other team in the Big 12 can claim more than three. Joshua Moore had a 78-yard catch on the first snap of the season and Tarik Black picked up 72 yards on a play last week against Baylor. Ingram had a 52-yard catch against TCU. Tight end Jared Wiley gained 52 yards on one of his six catches. Oklahoma State has surrendered one 50-yard catch in 2020, but it was a 70-yard score by West Virginia’s Winston Wright.

5. How many free yards will Texas give away on penalties?

So far, Texas has been penalized 43 times for 383 yards. In the Big 12, that trails only Oklahoma (46-429) and West Virginia (47-438). Earlier this season, Texas was penalized at least 10 times in three straight games. At no other time in the previous 10 years did Texas draw double-digit penalties in three straight games. Texas, though, was penalized just five times last week against Baylor. Texas drew 11 flags during its last trip to Stillwater in 2018, and a late personal foul call led to an odd and fiery midfield exchange between Herman and Cowboys coach Mike Gundy.