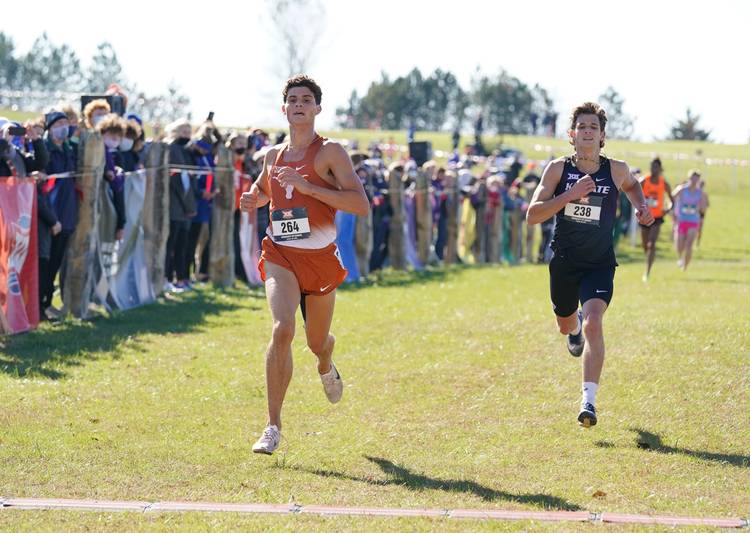 The University of Texas women earned runner-up honors for the second year in a row at the Big 12 cross-country championships, while the men placed third for their sixth straight year of top-three finishes. The event, held on Friday at Rim Rock Farm in Lawrence, Kansas, marks the end of a brief fall season for the Longhorns, who are ranked No. 29 and No. 24, respectively, in the USTFCCCA national coaches’ poll.

The women were led by sophomore Beth Ramos, who ran 21:11.5 on the hilly 6-kilometer course for sixth place.

“I was very happy with [Beth],” said coach PattiSue Plumer. “She probably went out a little too aggressively, she was probably angry I told her not to go out with the leaders. I’ve got to give her props for wanting to go for it. I want racers who race, so I’m not upset at all.”

“[Iowa State] was not beatable by us today,” Plumer said. “I think we ran really well and I’m really happy with how we did. I couldn’t be prouder with how they ran today and how much they sacrificed to get here.”

The young men’s squad was led by sophomore Haftu Knight, who battled to a strong finish of fourth place overall in 23:27 over the 8-kilometer course. True freshman Graydon Morris (brother of Gracie Morris) was No. 2 for the Longhorns in 24:06.8 for 17th place, closely followed by Crayton Carrozza in 24:09.2 for 18th place. Junior Brendan Hebert was the sole upperclassmen scorer for the Longhorns, running 24:17.8 for 22nd place and sophomore Cruz Gomez rounded out scoring in 23rd place with a time of 24:19.

The men scored a total of 84 points to finish third behind Oklahoma State and Iowa State, both of whom scored 31 points. The Cowboys were crowned conference champions on a tiebreaker, while Wesley Kiptoo ran a blazing 22:35.4 to keep the individual crown in Iowa State’s coffers for another year.

“Honestly, even if we nailed it today, we would have been third,” coach Pete Watson said. “Iowa State and Oklahoma State were just better. Haftu Knight was awesome, he stepped up. Our two-three were just okay… It was evident that this was a team that had never been in a real cross country race at this level.”

With team leaders Sam Worley and John Rice on the comeback from injury this year, the underclassmen lacked the perspective and experience that comes from high-level collegiate competition.

“They’re young but that can’t be an excuse and they need to make sure they handle stressful situations better,” Watson said.

The Longhorns raced just one other time during the shortened cross country season, which was limited due to the COVID-19 pandemic. That outing at the Arturio Barrios Invitational at Texas A&M resulted in team titles for both the men and women. The NCAA DI Cross Country Championships, normally held in November, have been postponed until March on the same weekend as the NCAA Indoor Track & Field Championships. Watson says the Longhorns are done with cross country for the 2020-2021 school year and will now turn their attention to indoor and outdoor track.

“I don’t think people really understand how hard the last three months have been,” Plumer said of COVID-19’s effects on college life for her student-athletes. “These kids don’t do anything but sit in their rooms and run and take classes. I’m so proud of them for getting through this fall.”