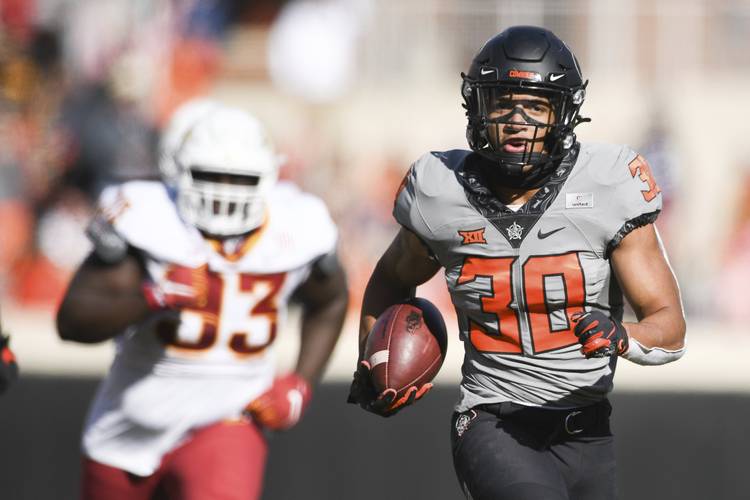 Chuba Hubbard (30) scores a touchdown during the first half of an NCAA college football game against Iowa State Saturday, Oct. 24, 2020, in Stillwater, Okla. (AP Photo/Brody Schmidt)

Five key matchups out of the Texas-Oklahoma State game to keep your eye on Saturday:

As described by Texas defensive tackle Ta’Quon Graham, Hubbard is a “monster.” Oklahoma State’s dynamic junior ranks seventh nationally in yards per game (119.5) and has five touchdowns. He’s averaging 5.1 yards per carry and piled up 139 yards in last week’s win over Iowa State. Hubbard was the nation’s leading rusher last season; his 2,094 yards were the 16th-highest season total in FBS history. Texas’ run defense has been average this season. The Horns rank fifth in the league, allowing 130.4 yards per game. Defensive end Joseph Ossai (shoulder) is expected to play, but will he be at full strength?

Austin reporters haven’t heard from Cosmi since the season began, but he’s about the only offensive lineman who hasn’t drawn closer scrutiny. He hasn’t had any glaring mistakes this season, like getting pushed back on field goal attempts or committing any personal fouls. He needs to be on his game against Lacy, who has nine tackles this season. Fellow OSU defensive end Trace Ford has eight tackles and three sacks. The Cowboys have the fourth-best run defense in the Big 12. Cosmi and his mates need to clear the way for the running backs, regardless who’s in the game. Keaontay Ingram, Roschon Johnson and Bijan Robinson must help move the chains and eat up clock, keeping OSU’s offense on the sideline.

There’s not a receiver in the world that doesn’t think he can beat man-to-man press coverage. So if D’Shawn Jamison or Josh Thompson want to walk up to the line and get in Wallace’s face, they’d better be ready for a battle. Wallace was the 2018 Biletnikoff Award finalist and currently leads the Big 12 in receiving yards per game (100.3). Texas receiver Joshua Moore has six touchdowns compared to Wallace’s two. Still, Wallace is capable of roving up and down the field at will — don’t forget what he did against sixth-ranked Texas in Stillwater in 2018 (10 catches for 222 yards and two touchdowns). The Horns will need safety help over the top from Caden Sterns, Chris Brown or B.J. Foster. Last season, Wallace had five catches for 83 yards against the Horns.

Of course Oklahoma State’s high-flying offense doesn’t go anywhere without Sanders, who returned to the lineup after missing several games with an injury. He completed 20 of 29 passes for 235 yards and two touchdowns last week against Iowa State. Texas has only six sacks through five games. Coach Tom Herman put a positive spin on that number this week by saying the Horns had been “more disruptive” this season than the last two years combined. Texas has 10 quarterback hurries and 29 pass breakups, not to mention five interceptions. If Sanders has all day to throw, the Longhorns will be in trouble. Ossai, Moro Ojomo, Alfred Collins or whoever’s in the game must get to Sanders and bring him down.

Gundy’s teams have always been troublesome for Texas, no matter who’s standing on the sideline. The Cowboys triggered Charlie Strong’s downhill slide in 2016 in Stillwater. Then in 2018, Herman was so frustrated he ran onto the field yelling at Gundy at the end. Herman later said it was all a misunderstanding, but OSU still walked away with the win. Texas needs this game much more than OSU does. The Horns can stay in the Big 12 title race with a win. Lose, and it’s likely over for good since Texas will have three conference losses. Herman’s challenge is to get the Horns to play with more discipline. This team always plays up or down to its opponent, and chances are, UT will have its own pistols firing.