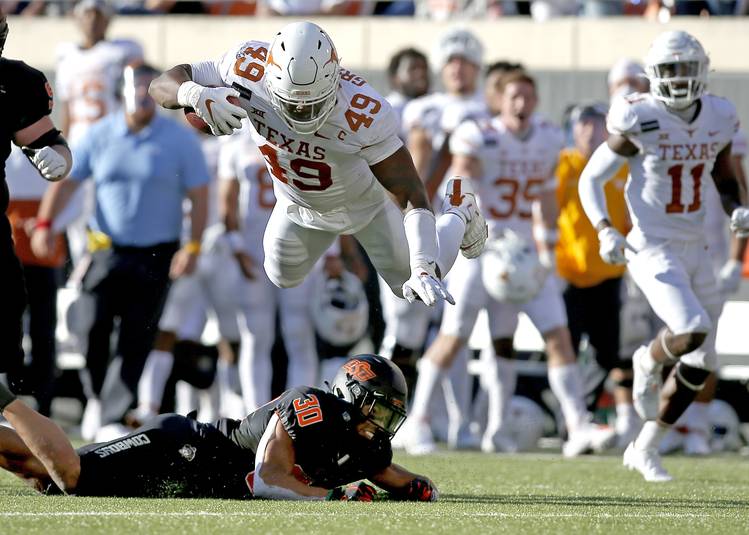 There were 166 snaps taken in Texas’ 41-34 overtime win at Oklahoma State on Saturday. Here are five that ended up making a big difference:

During Saturday’s contest, former UT cornerback Kobe Boyce tweeted, “It’s not easy to cover Wallace I would know.” Boyce, who left the Longhorns in July, started as a freshman in that 38-35 loss after Texas suspended starters Kris Boyd and Davante Davis for part of the game.

It’s not easy to cover Wallace I would know💀

Oklahoma State went into halftime with a 24-20 lead, but the Longhorns should have been facing a larger deficit. Cameron Dicker hit two field goals in the second quarter, both set up by turnovers.

The first was junior Jalen Green’s first career interception, which he returned 41 yards to the Oklahoma State 8. Later, Ta’Quon Graham rumbled 33 yards to the OSU 20 after picking up a fumble forced by Joseph Ossai.

Even though both turnovers led to points, the Longhorns were thwarted twice in their attempts to score the defense’s first touchdown since the 2017 Texas Bowl. Graham joked afterward that on his return, he just got tired before star running back Chuba Hubbard ran him down.

“Chuba’s fast. Man, I didn’t think he was going to be anywhere around there until I made that cut,” Graham said. “He’s a heck of an athlete, and it kind of sucks that he caught me.”

After both teams opened the second half with punts, Oklahoma State went back to feeding Wallace. The Cowboys completed two 18-yard passes and a 13-yarder to Wallace before he caught a 9-yard scoring toss. That put Oklahoma State on the verge of delivering an uppercut.

Texas, though, had a response. UT junior D’Shawn Jamison received the ensuing kickoff and returned it 100 yards for a touchdown. Jamison was penalized for a celebration, and UT missed the pushed-back extra point attempt, but the gap was cut to 31-26.

Jamison has taken two kickoffs back for touchdowns in his career. He has also scored on a 90-yard punt return and a blocked extra point return.

Texas took its first lead of the second half on a wild drive that had five key plays of its own. UT still trailed by five points when it took over at its 41 with 12 minutes, 15 seconds to go. The Longhorns pieced together a 15-play scoring drive that took 7:48 to complete. On the drive, Oklahoma State was penalized for roughing the punter on fourth-and-22. Jake Smith also hauled in a 9-yard pass on fourth-and-4 that was set up by an eventful 1-yard run by Roschon Johnson.

The biggest play of the possession was clearly Ehlinger’s 12-yard touchdown pass to Smith with 4:27 left. After Texas kept its offense on the field for a fourth-and-7, Oklahoma State sent seven rushers whom Ehlinger eluded with a rollout to his right. The senior quarterback found Smith, who had beaten safety Tre Sterling in coverage. Texas then converted its third two-pointer of the season to extend its lead to three points.

“I thought that fourth-down play, fourth-and-7 to Jake Smith, I thought that was the best play of his career,” Texas coach Tom Herman said of Ehlinger’s 87th touchdown pass as a Longhorn.

Oklahoma State tied the game with a 34-yard field goal in the final seconds of regulation. Texas then made the necessary plays in the first overtime session — a 15-yard touchdown catch by Joshua Moore and a fourth-down sack by Ossai — to secure the upset.

Texas is 2-1 in overtime games this season. Since Herman took over ahead of the 2017 season, the Longhorns are 3-3 in contests decided in overtime.

Texas report card: Win over Oklahoma State a chance for defense to up its season averages