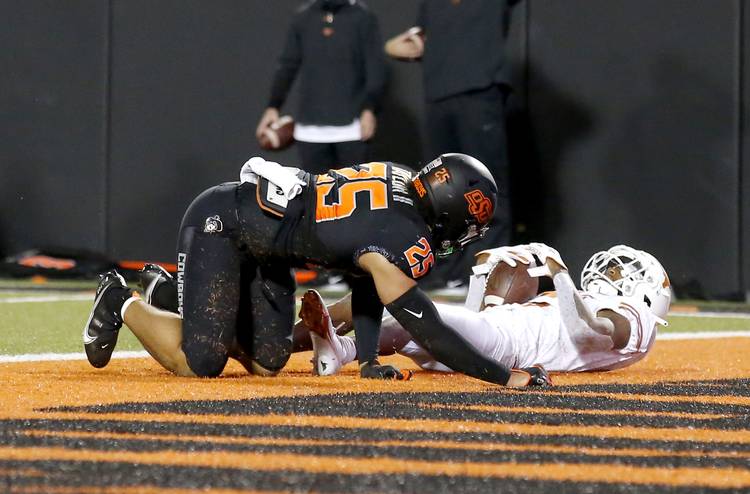 Tom Herman had to quibble with the stat sheet after Texas’ 41-34 overtime win over Oklahoma State on Saturday.

On paper, Texas wide receiver Joshua Moore was credited with just one target. Herman, however, insisted there were more. “I felt like we threw it to him a couple times and maybe it just sailed so far past him that the statistician couldn’t even tell who the target was,” Herman quipped.

Herman was indeed correct. Moore was more involved in the passing game than the stats indicated. That one official target was a big one: a 15-yard touchdown pass in overtime that proved to be the game winner.

Saturday’s showdown in Stillwater featured two receivers who had put in early bids for all-conference honors. Oklahoma State’s Tylan Wallace was averaging a Big 12-best six receptions per game. Moore had six touchdown catches over his first five games. No receiver in the conference had more, and only Oklahoma’s Marvin Mims had matched it.

Wallace tied a career high with his 11 receptions. That led to 187 yards and two touchdowns. Moore, meanwhile, had his only reception in regulation waved off when it was determined he had not reestablished himself after going out of bounds ahead of the catch.

Moore’s lack of production did not go unnoticed. At the beginning of overtime, Fox play-by-play commentator Joe Davis said, “I’ve been wondering all day where is Joshua Moore? Still without a catch. Leading receiver on the season for Texas. Does he wait until overtime to put his imprint on this one?”

To answer Davis’ question: Yes. Texas threw it three times in overtime. All three went Moore’s direction. Ehlinger overthrew him on a shot to the end zone, but Moore then drew a pass interference call on the next play. After Ehlinger took a sack to open UT’s new set of downs, Moore finally caught his first pass.

Ehlinger explained that Moore was actually his third read on the game-winning play. Oklahoma State, though, covered Brennan Eagles’ corner route and the Cowboys snuffed out the pivot run by Jake Smith out of the slot. That left Moore, who had been assigned a backside crossing pattern.

“J-Mo did a great job of beating the safety across his face and beating that Mike (linebacker) too,” Ehlinger said.

Moore’s score came five weeks after his 12-yard touchdown catch was the difference in UT’s overtime win at Texas Tech. He has caught a touchdown in three straight games, tied for the eighth-longest streak in school history.

After the game, Moore disagreed with the assessment that he had a bad game. He also didn’t think that his lack of catches was due to anything that Oklahoma State had schemed. Other Longhorns had just stepped up, and Moore believed his teammates deserved a shout out. Smith led Texas with seven receptions for 70 receiving yards. Eagles hauled in a 41-yard touchdown.

“As long as we get the win, that’s all that matters to me,” Moore said. “I am thankful that I was able to contribute the way I did.”

Texas report card: Win over Oklahoma State a chance for defense to up its season averages

With Texas, everything about these Longhorns is a debate, each week a new referendum