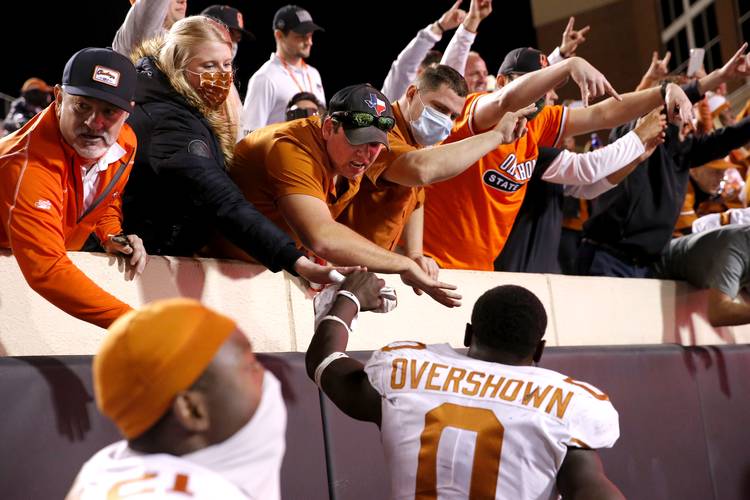 Texas’ 41-34 win over sixth-ranked Oklahoma State wasn’t easy — the Cowboys had the Big 12’s No 1-ranked defense, Texas hadn’t beaten a top-10 team since 2012 and hadn’t beaten one on the road since 2010, and it was their third overtime game of the season — but even on a day when Sam Ehlinger struggled, the Horns got the win.

It was that kind of day for the defense. Hence, grades for the Longhorns:

The stats weren’t great, and neither was Ehlinger for most of the game. But the senior leader made the plays when needed, escaping on fourth down to find Jake Smith for a go-ahead touchdown in the fourth quarter. He was 18-of -34 for 169 yards and three touchdowns to no interceptions. His ability to rise to the occasion was on display once again, leading Texas to an overtime victory for the second time this season.

Go figure: Ehlinger’s 15-yard overtime touchdown to Joshua Moore was his seventh career game-winning drive, tied for the most in school history with Major Aplewhite

The trio of Bijan Robinson, Roschon Johnson and Keaontay Ingram averaged 4.7 yards per carry. Robinson earned his second start and led the team with 59 yards on 13 carries. The former five-star also had a pair of receptions. Johnson was second on the team with nine carries for 59 yards. Ingram, who left the game with an ankle injury after only two carries, scored Texas’ only rushing touchdown. It was a pedestrian performance from the group.

Go figure: Texas had 40 carries for 118 yards against the Cowboys; the Longhorns are now 21-0 under Tom Herman when they have 40 or more carries

The wide receivers have struggled to get open and make big plays. That trend continued in Stillwater despite some clutch catches in the fourth quarter and overtime. Moore, for example, didn’t catch a pass until he snagged the game winner in overtime. Jake Smith led the team with seven receptions for 70 yards and a key touchdown in the fourth quarter. Brennan Eagles had three catches for 55 yards, including a 41-yard touchdown.

Cade Brewer paced the tight ends with four catches for 16 yards. He was mostly a safety valve for Ehlinger whenever Ehlinger was pressured. Jared Wiley managed just one catch for 5 yards. The group did account for five of the team’s 18 catches, but only for 21 yards.

This is a bad unit. Texas allowed five sacks in Stillwater, and Ehlinger finished with 13 runs for net minus-9 yards, mostly because of those sacks. The running attacks averaged 3.0 yards per carry. Left tackle Samuel Cosmi is a future NFL draft pick, but the rest of the unit struggles. The guard play continues to fail the offense. Derek Kerstetter is struggling at center compared to his level of play over his career at right tackle and guard.

Joseph Ossai can ship the Oklahoma State game film directly to NFL scouts. The jack end was the best player on the field for the entirety of the win. Entering the season, most fans would have picked Ehlinger or Cosmi as Texas’ best player. Through six games, it’s clearly Ossai, the team’s leading tackler who finished Saturday with a team-high 12 tackles, including six for loss and three sacks. He also forced a fumble and recovered a fumble. Defensive tackle Ta’Quon Graham played one his best career games, too, finishing with five tackles, including 3.5 for loss. He returned a fumble 33 yards to set up a scoring opportunity at the end of the first half. Jacoby Jones, T’Vondre Sweat, Alfred Collins and Moro Ojomo each had with three tackles.

Go figure: Texas has forced four fumbles this season; Ossai has two of them

The linebackers continue to improve as they get more experience, especially converted safety  De’Marvion Overshown. He ended  with five tackles, including one for loss. He also broke up a pass and caused a fumble. Juwan Mitchell was key to limiting Oklahoma State running back Chuba Hubbard to his lowest rushing total of the season. Mitchell, who finished with eight tackles, was tied for second on the team in tackles with Caden Sterns.

Go figure: Overshown, a former safety, has logged at least one pass breakup in four of Texas’ six games this season

Jalen Green’s interception — his first as a Longhorn — was the only real highlight from the defensive backs. Spencer Sanders passed for 400 yards and four touchdowns. Caden Sterns finished with eight tackles, tied with Mitchell for second on the team. Oklahoma State wide receiver Tylan Wallace did most of the damage, catching 11 balls for 187 yards and a pair of scores. Miscommunication and busted coverages continue to plague the secondary. The group also struggled to cover without drawing interference penalties.

Season stats: D’Shawn Jamison’s 100-yard kickoff return in the third quarter was the fifth 100-yard return in UT history and the first since D.J. Monroe’s in 2012 — and Monroe’s came against Oklahoma State