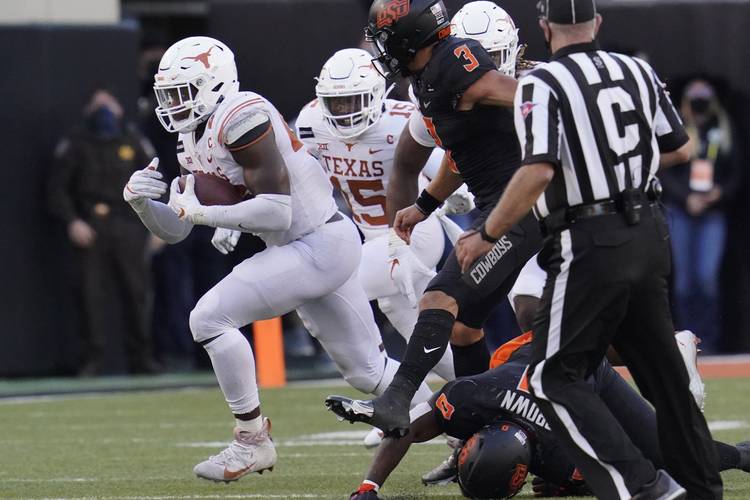 Texas' Joseph Ossai, left, carries a the ball after recovering an Oklahoma State fumble in the second half of an NCAA college football game in Stillwater, Okla., Saturday, Oct. 31, 2020. (AP Photo/Sue Ogrocki)

The game’s final play in overtime got all the attention, but Texas’ defense felt good about its entire second-half performance against Oklahoma State.

The Longhorns allowed just 10 points after halftime Saturday on the road against one of the most dangerous offensive teams in the Big 12.

“Not just that last play, but I think the way we played the entire way the second half is a big-time confidence booster for that side of the ball,” UT coach Tom Herman said Monday on the Big 12 conference call.

Overall, the Cowboys were held to 3-of-12 on third down. OSU averaged 5.8 yards per play overall but turned it over four times. Stopping the run was critical. Chuba Hubbard finished with 79 yards on 25 carries as OSU averaged 2.5 yards per attempt on the night.

As a unit, it was Chris Ash’s best overall day as Texas’ first-year defensive coordinator. UT can build on that performance Saturady against West Virginia.

“Yeah, I feel like people wrote us off too soon,” Graham said Monday. “The 2018 team had two losses in conference as well and we made it to the Big 12 championship game.”

Texas QB Sam Ehlinger on having to play through all these OTs: ‘Stillness of mind’

With Jake Smith now healthy and starting, Texas gains an ‘unbelievable talent’ in the slot