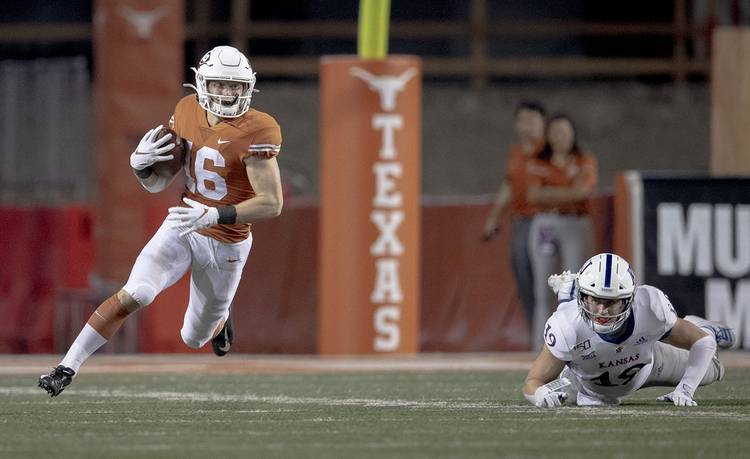 Texas receiver Jake Smith (16) runs with the ball against Kansas on Oct. 19, 2019 in Austin. [NICK WAGNER/AMERICAN-STATESMAN]

But during last Saturday’s overtime win at Oklahoma State, one of his plays stood out. On fourth-and-7 in the fourth quarter, Ehlinger eluded Cowboys defenders rushing in on a blitz and threw a 12-yard touchdown, giving Texas a late lead. After the game, Longhorns coach Tom Herman labeled it “the best play of his career.”

But that highlight play also deserved a prominent spot on the reel belonging to the Longhorn who caught the ball. The touchdown catch was the second of the season for Jake Smith and the eighth of the sophomore’s career.

“It definitely gave me a boost in my confidence,” Smith said on Monday. “Just to be able to have the opportunity to make a play like that at such a crucial point in the game was huge for me, but more importantly I was happy I was able to do that for the team. I know that was a crucial play, so I’m just happy that I was able to go out there and make it.”

In Saturday’s 41-34 win, Smith led Texas with seven receptions for 70 yards. He had four touches on that fourth quarter drive that ended with his touchdown for the 34-31 lead. Earlier on the drive, he snagged a 9-yard catch on a fourth-and-4 play.

“Jake is an unbelievable talent, unbelievable athletically. I trust him so much,” Ehlinger said. “Obviously, there’s been some bad breaks, but if anyone knows about some bad breaks early on in your career, it’s me. I’ve told him that multiple times: ‘I believe in you, you’re an incredible athlete.'”

Smith’s fourth quarter was a sight that fans had expected to see throughout this season. He caught six touchdowns in a backup slot role last year as a freshman. His duties were expected to expand this season with Devin Duvernay now in the NFL.

Smith, however, missed the first two games this season with a hamstring injury. And then after collecting six catches against TCU on Oct. 3, he reaggravated his injury during pregame warmups the following week against Oklahoma.

This isn’t the first injury Smith has had to overcome, he explained. He suffered a hip flexor before reaching high school and back pains were a problem during his senior year at Notre Dame Prep in Scottsdale, Ariz.

“I’ve had some experience (with injuries) and I got through that,” he said. “I tried to take the same approach to this injury and just try to take it day-by-day and keep getting treatment on it and keep just chipping away at it until it got better. I think that’s kind of the approach I took to it.”

In high school, Smith was an accomplished lacrosse player. He once scored five goals in an 8-7 win in the state title game. But he also was also named the Gatorade national player of the year in football as a senior. He knew that football was his future, even though he flirted with the idea of playing both sports at an East Coast school.

That led him to Texas and the slot. In four of Herman’s first five seasons as a head coach at Texas and Houston, his leading receiver played in the slot. Duvernay caught 106 passes last year. Lil’Jordan Humphrey enjoyed a breakout season in 2018.

But Smith has missed three games this season. Redshirt freshman Jordan Whittington (knee, hip) has been sidelined for four. Graduate transfer Brenden Schooler was injured for the Oklahoma State game. That leaves walk-on Kai Money as the only slot receiver who has appeared in all six of UT’s games.

Now healthy, Smith is confident that he can shine as Texas’ “H” receiver. Despite the time he’s missed, he still ranks third on the team with his 14 catches. He’s averaging 9.5 yards per reception.

“Stepping into a role that was filled by Devin Duvernay is obviously tough because of how great he was,” Smith said. “As I get experience and as the season goes on, I’m just getting more and more comfortable.”

Final play was great, but Texas defense gaining confidence from entire 2nd half in Stillwater