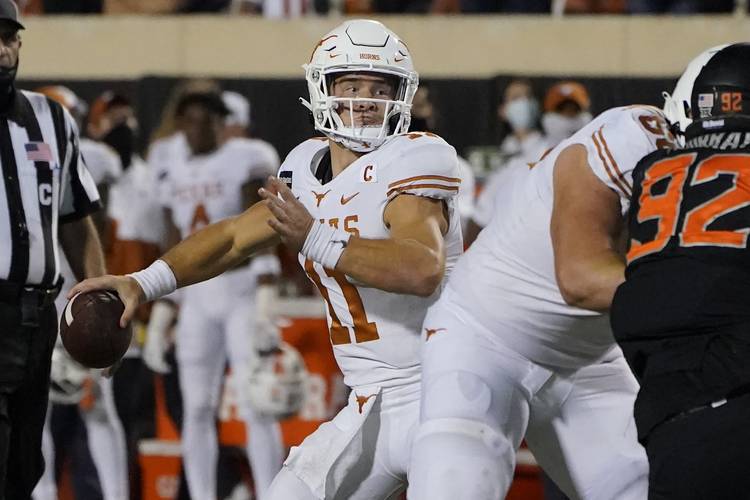 As much as Sam Ehlinger has matured physically over the years, his mental evolution is far more intriguing.

Ehlinger celebrated like a wild man with his teammates, then hopped on Zoom and calmly explained to reporters how Moore was his third option on the 15-yard touchdown pass.

Two days later, Ehlinger explained how the key is simply focusing on the task at hand.

“I understand now that calmness in those moments is your greatest asset and stillness of mind,” Ehlinger said Monday. “Because there’s no reason to let any emotions or nervousness override the present moment. And that’s what I try to focus on is being completely present on the task at hand regardless of the situation.”

He wasn’t always like this. Ehlinger joked about how he was a wide-eyed freshman against USC in 2017. “That was my first road game. I was 18. I had no idea what I was getting myself into,” he said.

Ehlinger’s second career start was against the fourth-ranked Trojans in the Coliseum. It was the first time Texas and USC had met since the 2005 national championship game.

“So it was a it was a big deal,” Ehlinger said. “Obviously the moment was huge for me. Obviously, I’m so thankful that I was able to play in that game.”

Ehlinger has since played for the Big 12 championship and won a Sugar Bowl. Now, he leads a team that’s aiming for its third straight win Saturday against West Virginia and trying to get into this year’s Big 12 title game.

“Now it’s like, OK, focus on your job, and execute your job at the highest ability and everything will take care of itself,” Ehlinger said.

He’s not exactly 100% healthy, either. Neither Ehlinger nor coach Tom Herman will shed light on the quarterback’s current medical report, but something has affected his deep throws.

Asked Monday about playing with pain, Ehlinger said, “There’s a difference between pain and being hurt and being injured.”

Final play was great, but Texas defense gaining confidence from entire 2nd half in Stillwater