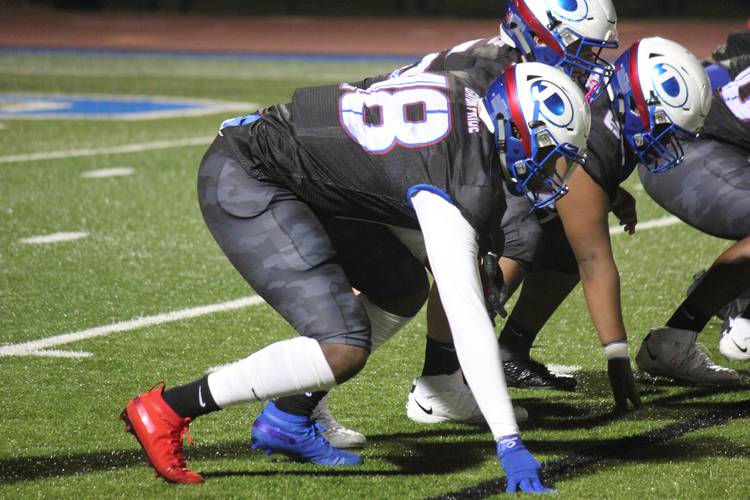 DICKINSON — Donovan Green is the only tight end in the 2022 recruiting cycle who currently holds an offer from Texas. The 6-4, 220-pound Dickinson standout recently included the Longhorns among his top six schools along with Texas A&M, USC, Oklahoma, Florida and Ole Miss. Green is a national top-100 prospect and the second-ranked tight end in the 2022 class, according to the 247Sports’ composite ratings.

“I can make plays,” Green said. “I want to go to a college that is going to allow me to make those plays.”

This year will be remembered by everyone for a variety of reasons. Recruits will remember 2020 as the hardest year to go through the process because of the restrictions on travel and visits. Green would have spent his summer at recruiting showcases and college camps. Instead, he was stuck at home and forced to take an indirect approach to recruiting.

“The hardest part of being recruited during the pandemic is not being able to visit schools to see the game atmosphere,” he said.

The four-star does know what he wants in a college, though.

“I’m looking for a coaching staff that can help me continue into an NFL-caliber player,” Green said. “I’m looking for a school that involves tight ends, has great academics and a family atmosphere within the program.”

Green holds 44 offers. The four-star caught 34 passes for 615 yards and five touchdowns last year as a sophomore. He was named first-team all-district in  District 24-6A and a MaxPreps sophomore All-American. Texas didn’t take a tight end in 2020. Colorado native Gunnar Helm is a three-star tight end currently committed for 2021. Juan Davis, a three-star athlete from Everman, also could move to tight end full-time at Texas.

Sylla is in the argument for best overall 2022 prospect in Texas along with quarterback Quinn Ewers, offensive lineman Devon Campbell and cornerback Denver Harris. Sylla is a 6-6, 230-pound prospect with 31 offers. Texas A&M is considered the early favorite for the 34th-ranked overall prospect in the entire 2022 class.

“Not being able to visit schools is the hardest thing so far,” Sylla said. “I want to find somewhere that I can play early.”

Texas held momentum on the recruiting trail for 2022 as recently as last week, but decommitments by Ewers and four-star wide receiver Phaizon Wilson deflated Tom Herman’s efforts in the junior class. Texas’ only remaining pledge for 2022 is four-star cornerback Jaylon Guilbeau.

With Jake Smith now healthy and starting, Texas gains an ‘unbelievable talent’ in the slot