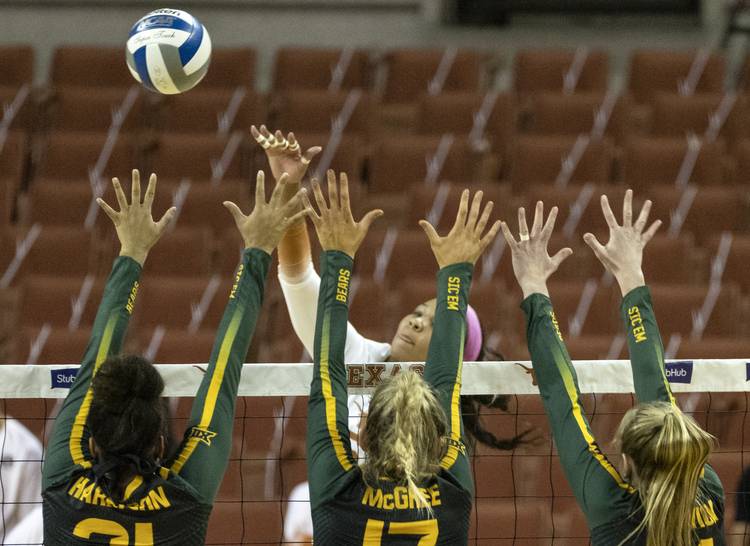 Texas sophomore Skylar Fields (5) pushes the ball over a wall of Baylor defenders during a volleyball match in Austin on Nov. 5, 2020. (Rodolfo Gonzalez For Statesman )

You figure there aren’t many arguments that Texas volleyball coach Jerritt Elliott loses to his players.

Elliott, after all, was hired at Texas only a few months after star outside hitter Logan Eggleston was born. But Thursday night, it was Eggleston adamantly disagreeing with her coach in a key moment — down two sets to Baylor, all tied up 21-21 in the third.

Eggleston wanted Elliott to challenge a call on her kill attempt that had just been ruled out. Elliott didn’t think she was correct.

Still, he challenged the call anyway — and won. Point, Eggleston.

After the match, Eggleston said it “felt good to win that one.” Know what else felt good? Beating Baylor.

“Baylor came out playing like crazy, crazy good, so it feels really good just to be able to keep our composure on our side and just come back and find a way to win,” Eggleston said. “Everyone did a really great job of picking up their responsibilities and (we) ended up with a nice win.”

In the third set, Baylor was closing in on a sweep when Eggleston’s shot was ruled to have gone long without being touched at the net.

Then a switch flipped.

After his players pleaded for a review, Elliott challenged the call. Officials, after consulting a video replay, overruled their call, flipping the score from 22-21 for Baylor to 22-21 in favor of Texas. The Horns followed up that point with an ace from Sydney Petersen to go up 23-21, and 5-8 setter Jhenna Gabriel’s sixth kill of the season later made it a 24-22 game. A thunderous swing by Asjia O’Neal closed the set and kept Texas in the match.

Elliott later admitted that he didn’t think he’d win the challenge, but said he protested the call because he had two challenges to spare.

“I even told Logan that there was no touch and then gave her a fist bump afterwards when she was right,” Elliott said. “That’s why I wear glasses, I guess.”

Texas sprinted out to a 14-3 lead in what would be a 12-point win in the fourth frame. Baylor scored the opening point of the decisive fifth set, but that would be the Bears’ last lead of the night.

The Longhorns have dropped only five sets all season, but Thursday’s win was UT’s second significant comeback. Texas also rallied from a 2-1 deficit at Kansas State in October.

“Obviously, winning in three is something that’s super fun. But I think going to five and battling and really pulling everything we can out of ourselves really gives the team confidence and just allows us to see how good of a team we can be,” O’Neal said. “These tight five-set matches are something that we always live for.”

Last week I tested positive for COVID-19, my symptoms were mild and I have been following all of our doctors health & safety protocols. I’m sad I can’t compete with my teammates tonight but I will be cheering them on from isolation. I can’t wait to get back in the gym! Hook ‘em🤘🏼 pic.twitter.com/TsuVTeCYcq

Defensively, Texas held Baylor to -.071 and .118 hitting percentages in the fourth and fifth sets. Texas got 15 total digs from both Eggleston and freshman Nalani Iosia, who was making her first start at libero. About an hour before the match, regular libero Morgan O’Brien announced on Twitter that she had tested positive for COVID-19.

“They did a really good job of just coming out and just playing their game and not getting frazzled and not thinking, ‘Oh, I’ve never played Baylor before. This is my first time playing in such a big match,'” Eggleston said. “You couldn’t even tell.”