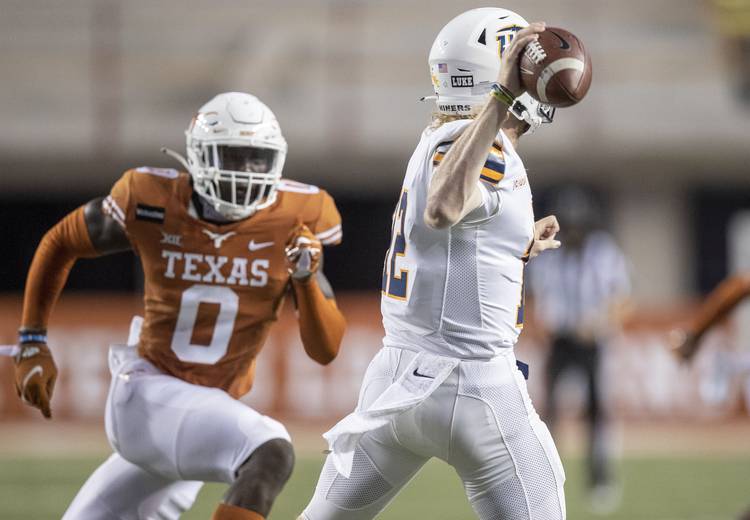 The offensive line that Cosmi anchors has underwhelmed this season. Texas is averaging 4.4 yards per rushing attempt and the Longhorns have allowed at least five sacks in two of the last three games. Nonetheless, the 6-7, 309-pound Cosmi has been projected as a potential first-round NFL draft pick. Texas ran a trick play for him in Morgantown last year and he scored on a 12-yard run.

Austin Kendall, who was picked off four times in last year’s 42-31 Texas win, is still around, but Doege is now the main man in Morgantown. A junior who spent his first two years at Bowling Green, Doege has thrown for 11 touchdowns against three picks. His older brother Seth played at Texas Tech and topped 300 passing yards in his 2011 and 2012 games against Texas.

The Big 12’s reigning newcomer of the week, Fields recorded 15 tackles in last week’s upset of Kansas State. Since 2009, only four other Mountaineers have tallied as many in one game. If Fields’ name sounds familiar to UT fans, there’s a reason. A graduate transfer from Arizona, Fields picked West Virginia over Texas and Minnesota back in August.

In his first season as a linebacker but his third year at Texas, Overshown has recorded 34 tackles. The converted safety is still a menace in pass coverage. He has intercepted one pass and he’s tied for the team lead with five pass breakups. Said defensive coordinator Chris Ash: “The guy’s going to be a special player. He’s making plays. He’s going to continue to improve as we go forward.”

Texas vs. West Virginia: Herman’s first recruiting class searches for a ‘badge of honor’ in what may be its final act