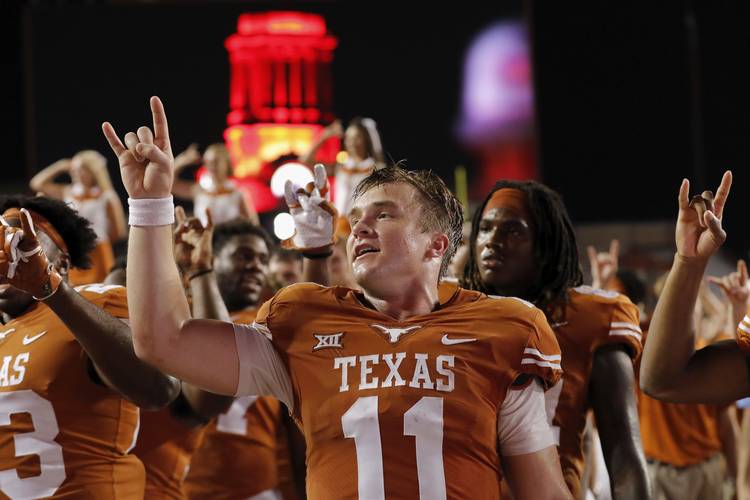 This week’s notable number is 22 — the jersey number that Texas retired in 2008 in honor of Bobby Layne. Joshua Moore leads all UT receivers with his 22 receptions this season. Earl Campbell had 22 100-yard rushing performances in his Longhorns career.

Twenty-two also accounts for the numbers of passes that Texas senior Sam Ehlinger has attempted in overtime.

Since Ehlinger arrived on campus in 2017, Texas has appeared in six overtime games. Those six games have featured 11 extra sessions of football.

Over his overtime appearances, Ehlinger has completed 15 of 22 passes. He has thrown for 146 yards, three touchdowns and two interceptions. Two of his touchdowns were decisive throws. Both of his interceptions were game-enders.

On Monday, Ehlinger was asked how much he’s changed since his first overtime game. Three years ago, he and Texas were upended in a second overtime at No. 4 USC. Last weekend, Ehlinger threw a 15-yard touchdown pass in an overtime win at No. 6 Oklahoma State.

“Just I understand now that calmness in those moments is your greatest asset and stillness of mind because there’s no reason to let any emotions or nervousness override the present moment,” Ehlinger said. “That’s what I try to focus on is being completely present on the task at hand regardless of the situation.

“That’s a night-and-day difference from freshman year. I think freshman year, I’d probably been like, ‘Oh my gosh, it’s overtime, like, we have a chance to beat USC,’ ‘Oh my gosh, it’s overtime, we’re playing Mason Rudolph and Oklahoma State. This is crazy.’ Now it’s like, OK, focus on your job and execute your job at the highest ability and everything will take care of itself.”

A loss to Oklahoma in 1996 was notable for Texas because it featured the program’s first overtime snaps. The Longhorns wouldn’t return to overtime until a 47-40 win at West Virginia in 2013. In 2016, UT’s games against Notre Dame and Kansas were also decided in overtime. Thus, Ehlinger has been Texas’ quarterback for six of its 10 overtime appearances. Let’s take a look at his overtime performances:

2017: USC 27, Texas 24 (2 OT). USC quarterback Sam Darnold was only a few months away from being the third overall pick in the NFL draft, but Ehlinger held his own at Memorial Coliseum on Sept. 16, 2017. Ehlinger was 5-for-5 with a touchdown pass after regulation ended, but his fumble inside the USC 10 essentially ended the Longhorns’ chances of an upset. Three plays after that turnover, the Trojans kicked a 43-yard field goal for the win.

2017: Texas 40, Kansas State 34 (2 OT): Ehlinger opened his second overtime appearance with a 25-yard touchdown pass. Kansas State answered with a touchdown drive of its own on Oct. 7, 2017, but then missed a field goal. The Longhorns eventually secured a win on Chris Warren III’s 2-yard run.

2017: Oklahoma State 13, Texas 10. Two weeks after beating Kansas State, Ehlinger was picked off in the end zone to end UT’s third overtime game of the 2017 season. Two days later, it was announced that Ehlinger had suffered a concussion.

2020: Texas 63, Texas Tech 56. Texas settled all of its scores in regulation during the 2018 and 2019 seasons. The Longhorns, though, began working overtime shifts again this September. After a frantic fourth-quarter rally in Lubbock, Ehlinger’s 12-yard pass to Moore accounted for the only touchdown in overtime.

2020: Oklahoma 53, Texas 45 (4 OT). Ehlinger did not throw any touchdown passes over four extra periods at the Cotton Bowl on Oct. 10. Two touchdown runs from Ehlinger did help extend the game, but the afternoon’s final play was a pass that was intercepted by Oklahoma’s Tre Brown.

2020: Texas 41, Oklahoma State 34. For the second time this season, Ehlinger and Moore connected for an overtime session’s only touchdown. This pass covered 15 yards.

Editor’s note: This story originally stated that Texas had played in eight overtime games in its history. The correct number is 10.

Texas vs. West Virginia: Herman’s first recruiting class searches for a ‘badge of honor’ in what may be its final act