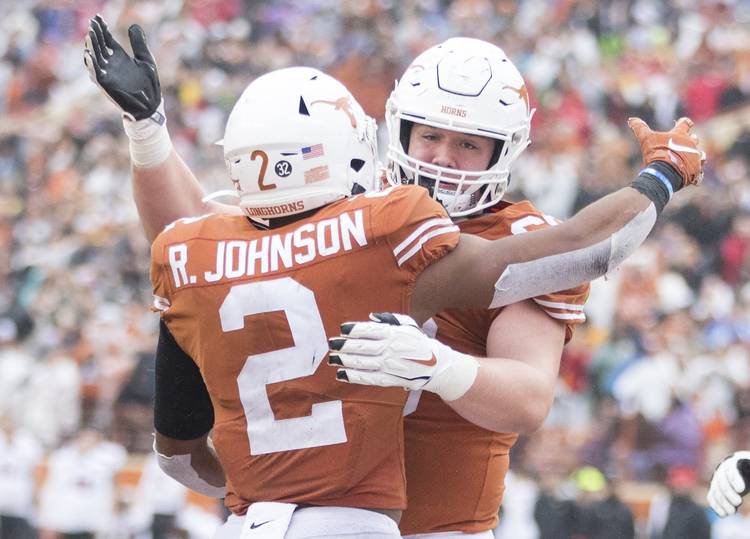 Texas running back Roschon Johnson (2) celebrates a touchdown with Derek Kerstetter (68) during a 49-24 win over Texas Tech in Austin on Nov. 29, 2019. [RICARDO B. BRAZZIELL / AMERICAN-STATESMAN]

Five questions facing No. 22 Texas on Saturday against West Virginia:

1. With no Keaontay Ingram, who will lead the Texas running game?

Ingram, the most experienced running back on the roster, will be out this week against the Mountaineers with a high ankle sprain. He’s averaging 4.7 yards per attempt. That means Roschon Johnson and Bijan Robinson, the other two members of UT’s three-man rotation, must pick up the slack. Robinson, the five-star freshman, has started the last two games. Don’t discount quarterback Sam Ehlinger’s running ability near the goal line. He’s got seven touchdowns.

2. Will Texas get Joshua Moore involved earlier than last week?

Moore is Texas’ leading receiver with 22 catches for 343 yards. Yet he didn’t make his first catch last week against Oklahoma State until overtime. It was the 15-yard go-ahead touchdown, but still, that’s a long time to wait. The Horns have other options, like Brennan Eagles and Tarik Black. The tight ends are getting involved more, be it Cade Brewer or Jared Wiley. But Moore is a solid possession receiver who needs the ball.

3. Will Texas’ defensive backs get flagged for interference?

Texas defensive coordinator Chris Ash will continue to insist on press coverage at the line of scrimmage. “We’re not coaching our guys to play scared,” Ash said this week. Play enough tight man-to-man coverage leads to pass interference calls, he admitted. Texas has another tough task with Winston Wright Jr., who has two 100-yard games this season. Sam James and Bryce Ford Wheaton have five touchdowns combined, too.

4. Can Texas play clean at home when all are now must-win games?

The Longhorns have no room for error in the Big 12 standings. A third league loss would damage this team’s already-thin Big 12 championship hopes. The Horns have committed double-digit penalties in four out of five Big 12 games — an astronomical figure for any team with title hopes. A lot of these wounds are “self-inflicted,” as coach Tom Herman points out. This team isn’t good enough to have a poor, undisciplined game and expect to win.

5. Can Texas overcome its own inconsistency?

Under the last two head coaches, Texas plays up or down to its opponent. The Horns pulled it together last week against a top-10 team. But can they do it against the Mountaineers, a 6.5-point underdog coming to Austin? Herman’s teams are incredibly erratic against non-ranked opponents, and this series has gone back and forth the last four years. It’s going to take a solid, all-around effort to be a plucky upstart in Neal Brown’s Mountaineers.

Texas’ notable number: Sam Ehlinger’s overtime shifts with the Longhorns — and the number 22

Longhorns prevail again as No. 1 Texas, No. 3 Baylor stage another five-set thriller