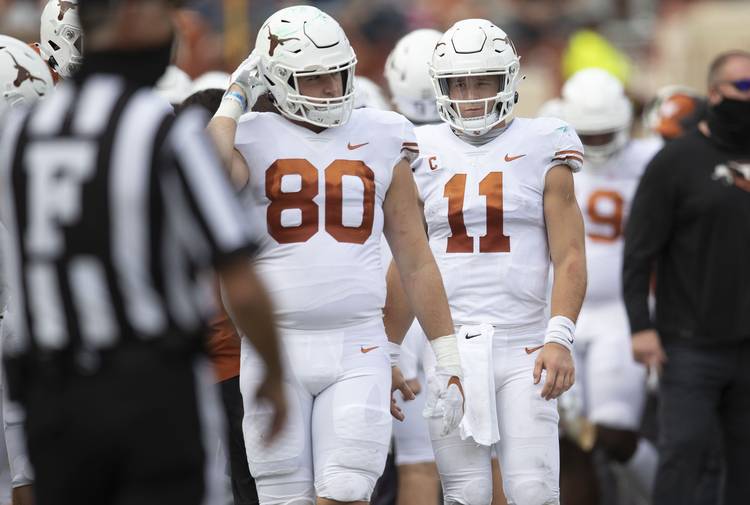 Texas quarterback Sam Ehlinger (11) and tight end Cade Brewer (80) watch their defense compete against Baylor in Austin on Oct. 24, 2020. Ehlinger and Brewer were both members of UT's 2017 recruiting class. [RICARDO B. BRAZZIELL/AMERICAN-STATESMAN]

For social media purposes, most of Tom Herman’s recruiting classes at Texas have been branded with a catchy nickname.

Those who signed during the 2018 recruiting cycle — Herman’s first full cycle at Texas — were part of the “#RevolUTion18.” That class ranked No. 3 nationally.

The “#fUTure19” group involved prep prospects from the Class of 2019. It too ranked third in the country.

The freshmen who joined the Longhorns this year? They got plenty of “#CloUT2020.” It ranked eighth, a third straight top-10 class.

Such a marketing campaign was not created for the first players who signed with Herman, though. Was that because of the limited time between Herman’s hire at the end of November 2016 and signing day? Or did UT not bother because of the perceived lack of top talent in the class? Nobody quite knows. Those 2017 signees did notice, though.

“We joke around that our class name — and excuse my language — was ‘Shit Stain 17,'” senior quarterback Sam Ehlinger said on Monday. “They all got names and that’s what we were.”

The recruits signed in 2017 was the transition class for Herman, who had spent the previous two years at Houston. Transition classes are often a letdown for fans of recruiting. In 2017, ESPN reported that in a study of nearly 350 recruits who signed with Power Five transition classes from 2012 to 2014, six of the 15 classes produced more busts than starters.

Texas’ 2017 group ranked 25th. It was the Longhorns’ lowest ranking since 2000. Of the 18 signees — six of which had orginally comitted to former UT coach Charlie Strong, including Ehlinger — only seven were considered four-star prospects by 247Sports’ composite rankings. Ehlinger, a four-star out of Westlake, was the Longhorns’ top-rated recruit, the fourth-rated dual-threat quarterback prospect in the country and 118th-overall recruit in the nation. Houston Langham Creek running back Toneil Carter, another four-star, was Texas’ second-highest recruit and ended up signing with the Longhorns only because of a recruiting snafu with Georgia.

Said left tackle Samuel Cosmi, who was one of that group’s lowest-rated recruits but now is a first-round NFL draft prospect: “The guys that came in 2017, not a lot of people gave us a chance. We were looked (at) as underdogs.”

How have things worked out for the Class of 2017?

So far, Texas has gotten 188 starts out of just 11 of those 18 signees. Ehlinger ranks No. 2 in school history in career passing yards and touchdown passes. Offensively, the Class of 2017 has accounted for 2,667 career rushing yards, 66 receptions and 360 tackles. Anchored by Ehlinger’s 32 career touchdown runs, the class has produced 355 points.

Off the field, Ehlinger has twice been a team captain. He was joined this season by Cosmi, Graham and offensive lineman Derek Kerstetter, a versatile three-star signee who has logged starts at guard, tackle and center.

“We are so appreciative of them and their contributions to the building and continual building of this program,” Herman said this week. “I can’t say enough about how proud I am and we are to have coached them for the last four years.”

Of the 18 signees, 17 made it to campus. Kicker Joshua Rowland, linebacker Gary Johnson and defensive lineman Jamari Chisholm were junior college recruits who spent two or three years in Austin. They have all moved on. Toneil Carter and wide receiver Jordan Pouncey eventually transferred; cornerback Kobe Boyce and defensive lineman Rob Cummins stepped away from the sport.

That leaves 10 from the class who are still on the roster. Running back Daniel Young and defensive lineman Marqez Bimage, though, did opt out of this season over coronavirus concerns.

Technically, all of the holdovers from Herman’s transition class could return in 2021. The NCAA has gifted its athletes an extra year of eligibility due to the pandemic, and a few of those 2017 signees used a redshirt earlier in their careers anyway. That scenario seems unlikely, however. Cosmi and Ehlinger entertained the idea of entering the 2020 draft. Others may decide that four years of college football is enough.

So if this is the Class of 2017’s final ride, the desired destination is, as it’s always been, Arlington. The Big 12 championship game will be held at AT&T Stadium in December. The Longhorns were the conference’s runner-up in 2018, but the program is still looking for its first Big 12 title since 2009.

To secure a title game spot, Texas will likely need to win its final four games against West Virginia on Saturday, followed by Kansas, Iowa State and Kansas State. Since 2017 Texas has strung together four straight wins against Big 12 teams only once. But the Longhorns, including the Class of 2017, will have a say in how their final chapter is written; every other Big 12 team has at least one conference loss, and of the three teams ahead of UT in the standings, the Longhorns have beaten one of them (Oklahoma State) and still get to play the other two (Iowa State and Kansas State).

Like Texas, West Virginia boasts an overall record of 4-2. The Mountaineers also have won three of their five conference games. One of those victories was last weekend’s 37-10 takedown of a Kansas State team that was then ranked 16th.

“We’ve been talking about this since probably last season, after our junior years were over, how bad that we wanted to finish this off the right way,” Graham said. “To have that badge of honor is to leave something better than you (found) it. That’s all that we want to do. It kind of validates what we’ve done here if we do that.”

Texas’ notable number: Sam Ehlinger’s overtime shifts with the Longhorns — and the number 22