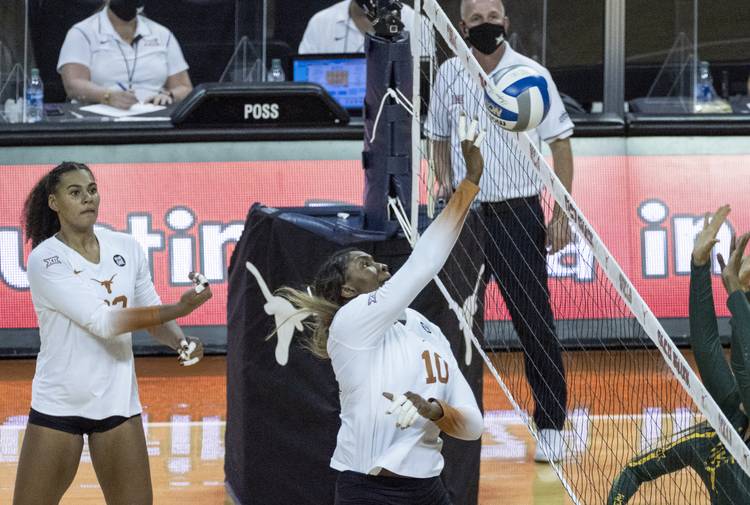 Baylor has the reigning national volleyball player of the year, a one-woman demolition crew with a lethal right arm.

Texas, blessed with talent throughout its lineup, comes at opponents from multiple places and angles.

Senior Yossiana Pressley had a season-high 32 kills for Baylor, but that wasn’t enough to prevent the Longhorns from improving to 12-0.

Texas came from two sets down to beat Baylor in five on Thursday. This time the Longhorns won the first two, Baylor (11-3) rallied to even the match, and then Texas regrouped to dominate the fifth.

“I don’t think it was the best volleyball we’ve played (this) season by any means,” UT coach Jerritt Elliott said. “But that’s what makes this team great — we find ways to win.”

Indeed, Texas All-America outside hitter Logan Eggleston led the Horns with 14 kills, but it was far from a great night for her. She hit with just .061 accuracy, far below her .340 mark for the season, and made four of the Longhorns’ 18 service errors.

But back to Texas’ overall strength: Skylar Fields and Brionne Butler each had 11 kills, and Asjia O’Neal made nine. Molly Phillips had seven, including three that helped Texas take an 8-3 lead in the decisive fifth set.

“We have weapons everywhere,” Butler said. “If one player is not on, we have three more. We were really balanced tonight.”

Whether it was fatigue from that five-setter on Thursday or a familiarity that comes with facing the same opponent on consecutive nights, neither team was efficient, Baylor hitting just .222 and Texas .213.

The Longhorns, trailing 22-20 in the first set, scored the final five points — a service error by Baylor, kills by Phillips and Eggleston, an ace by Reilly Heinrich and, finally, a smash down the middle by Butler.

Eggleston made critical plays again in the second set, her kills giving Texas its 23rd and 25th points. She received support down the stretch from O’Neal, who hammered home the 24th and final points of the set. The Longhorns limited Baylor to an incredibly poor .056 hitting accuracy in the set.

Presley had 13 kills in the third set. For a short stretch, neither team appeared capable of taking the set, each committing consecutive service errors near the end. Baylor finished with 18, matching the Longhorns.

Pressley made six more kills in the fourth set, and help came from all over her side of the court as Baylor wrested control with an 8-2 push. Pressley had two kills during the run. Emily Van Slate served consecutive aces. Hannah Sedwick and Kara McGhee combined for a couple of blocks.

“The wheels came off,” Elliott said. “We lost a lot of confidence in games three and four. We looked bewildered. They kind of took it to us. The first thing I said to them was, ‘Inhale confidence. Exhale doubt. Close your eyes.’”

When they opened them again, Phillips staked Texas to a lead, and then Eggleston, O’Neal and Fields made kills.

Fields was asked if the Longhorns ever worried? Smiling, she replied, “Never.”

Notes: Jhenna Gabriel handed out 44 assists for Texas, Nalani Iosia had 23 digs and Butler made 11 blocks. … Senior Ashley Shook was honored after the Longhorns’ final home game. She plans to transfer after the semester as a graduate student. … The Longhorns play  next Thursday and Friday at West Virginia. Then they have a makeup series against TCU. After that, they’ll wait to find out what type of spring schedule they can play in preparation for the NCAA Tournament in April.