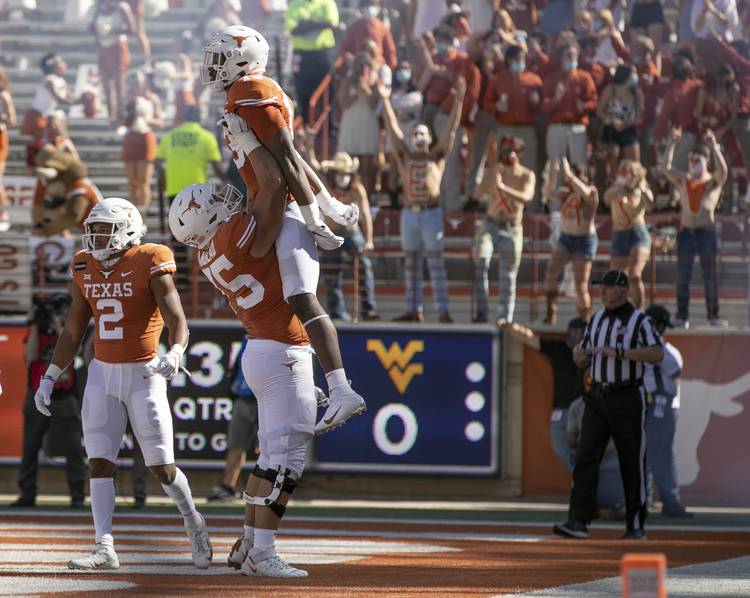 Revisiting our five pregame questions that were facing the 22nd-ranked Longhorns ahead of Saturday’s 17-13 win over sixth-ranked West Virginia.

1. With no Keaontay Ingram, who led the Texas running game?

The five-star freshman started and finished things the right way: His 54-yard run on the first play of the game was UT’s longest run from scrimmage this season and set up the Longhorns’ opening touchdown, and his 35-yard catch in the final minutes allowed Texas to run out the clock. He finished with 113 yards on 12 carries and helped make up for not having Ingram, out with a high ankle sprain. Robinson started for the third straight game.

2. Did Texas get Joshua Moore involved earlier than last week?

Texas’ leading receiver has been all but shut out statistically the last two games — one catch against Oklahoma State, no catches against West Virginia. But he’s still finding ways to positively impact games. His lone catch in Stillwater was the game-winning touchdown in overtime and against the Mountaineers, he recovered a Robinson fumble in the second half. He left with a shoulder injury in the fourth quarter.

3. Did Texas’ defensive backs get flagged for interference?

The secondary enjoyed a solid day. Yes, Jarret Doege threw it 50 times and finished with 317 yards. But he didn’t throw a touchdown and Longhorns defenders made several big plays, including pass breakups on two critical fourth-down throws into the end zone in the fourth quarter by B.J. Foster and Chris Brown. Defensive coordinator Chris Ash wants his corners to play press coverage at the line of scrimmage — “We’re not coaching our guys to play scared,” he said this week — and his DBs made plays on Saturday.

4. Did Texas play clean at home?

Every game is a must-win game now, in terms of making it to Arlington for the Big 12 championship game — Texas already has two conference losses, and a third would take the Horns out of the picture. Committing lots of penalties does not help. The Horns had committed double-digit penalties in four of their first five Big 12 games but had only four against the Mountaineers.

5. Did Texas overcome its own inconsistency?

Oh, the offense didn’t look right. Sam Ehlinger threw more incompletions than completions and Texas scored just once in the second half, but the defense was solid against the run, turned the Mountaineers’ offense into a one-dimensional passing attack and the defensive linemen (see: Ta’Quon Graham and T’Vondre Sweat), linebackers (see: DeMarvion Overshown and Juwann Mitchell) and especially the defensive backs (B.J. Foster, Chris Brown and Josh Thompson) all made big plays.

No. 22 Texas 17, West Virginia 13: Longhorns flex their defensive muscles against the Mountaineers

‘Work in progress’: No. 21 Texas logs another mixed performance with its third straight win