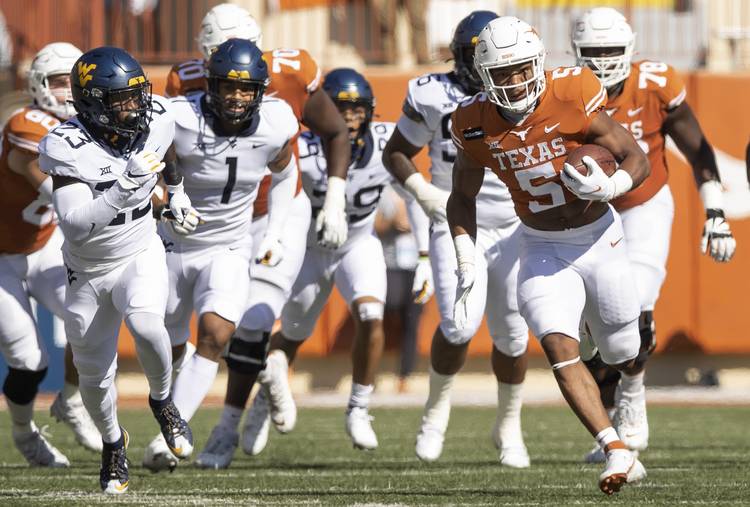 Enough with the three-man rotation. At this point, there should be little doubt that Texas freshman Bijan Robinson should get more chances as the Longhorns’ featured tailback.

Robinson opened Saturday’s 17-13 win over West Virginia with a 54-yard dash through the Big 12’s No. 1-ranked run defense. He finished with a 35-yard reception for a first down that sealed Texas’ 17-13 win.

He became the first Texas running back to enjoy a 100-yard game this season. The five-star recruit from Arizona finished with 113 yards on just 12 carries. Roshon Johnson had 29 yards on 10 carries. Keaontay Ingram, the third man in the season-long triple-threat, was sidelined due to a high ankle sprain.

“First off, I just want to give honor to God. Because without him, I wouldn’t have the opportunity to be here. And the offensive line as well,” Robinson said afterward. It was his first interview as a Longhorn.

“It’s all development,” he added. “I’m good where coach needs me. If that’s 20 carries, then that’s fine. But I don’t really focus on that. I just focus on trying to make this team better any way I could. We’ve got a great quarterback in Sam (Ehlinger) and a great offensive line.”

Robinson flashed his five-star stuff early with a spin move away from a tackler and then a massive stiff-arm on WVU’s Alonzo Addae. But he also fumbled once (which UT recovered) and missed a key block in pass protection, Texas coach Tom Herman noted.

Herman is perceptive. He can sense the outside push to get Robinson more carries. But the coach is not going to be swayed by Robinson’s one-game average (9.4) compared to what he can or can’t do over the long haul.

“I was taught a long time ago, if I have one foot in a burning fire and another foot in a cryo-chamber, on average I feel pretty good,” Herman said. “I’m sure that as we watch the film, if we deem necessary, he’s going to continue to earn more and more carries.”

Robinson isn’t getting over his skis, though. “You know, I’m still just a freshman just trying to find my way in college football. I have so much work to do as a young guy,” he said.

Ehlinger’s off day: Nobody inside the Texas program will deny that Ehlinger is playing through pain. How much is that hampering his ability remains a guarded secret, though.

“If I’m available, I’m always going put my body on the line for my team, regardless and do it at the best of my ability,” Ehlinger said Saturday.

Ehlinger completed only 15 of 31 passes for 184 yards with two touchdowns against the Mountaineers. He’s now completed less than 60% of his passes in four of the last five games.

Some of the incompletions weren’t totally his fault. Three particular deep balls come to mind in the fourth quarter: Brennan Eagles couldn’t haul in a long first-down pass, possibly losing it in the sun; and back-to-back second- and third-down shots downfield to Brenden Schooler and Tarik Black were catchable, though.

Eagles finished the day with a team-high four receptions for 43 yards. Jake Smith had the best catch for Texas with a 33-yard touchdown grab in the third quarter.

Coburn to get MRI: It was rough-and-tumble action out there injury-wise, and the Longhorns likely need the coming off week to heal. “The bye week’s coming at a perfect time, let’s just say that,” Ehlinger said.

Defensive tackle Keondre Coburn left the game in the first quarter and returned in street clothes while wearing a protective boot. Herman said Coburn would get an MRI test on Saturday afternoon for his sprained ankle.

Receiver Joshua Moore also suffered a sprained shoulder, effectively ending his uneventful day. He didn’t have a single catch but made one of the biggest plays of the day by recovering Robinson’s fumble.

Improved special teams: Punter Ryan Bujcevski was also getting his knee examined after the game, Herman said. His injury came at the end of a rather successful day where Bujcevski averaged 43.3 yards on six punts. Two of those were killed inside the 5-yard line by Josh Thompson, who was sensational as UT’s gunner.

Herman said the punt unit is “light years ahead” of where it was three games ago. Herman praised Cade Brewer and Reese Leitao for directing traffic and handling the “mental gymnastics” required. Special teams coach Jay Boulware has also adjusted the protection schemes, Herman said.

“What we’re doing is putting them in better positions to make those blocks,” Herman said.

No. 22 Texas 17, West Virginia 13: Longhorns flex their defensive muscles against the Mountaineers