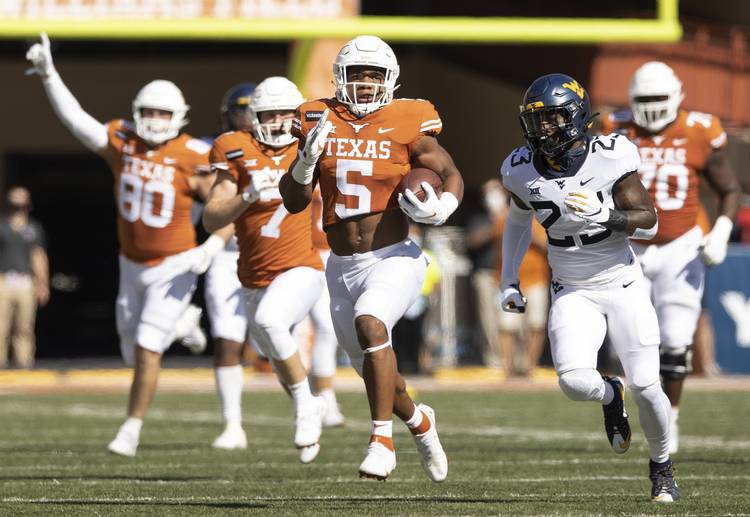 Texas running back Bijan Robinson tries to break away from West Virginia safety Tykee Smith during the first quarter at Royal-Memorial Stadium on Nov. 7, 2020. [JAY JANNER/AMERICAN-STATESMAN]

There were 143 snaps taken in No. 22 Texas’ 17-13 win over West Virginia on Saturday. Here are five that ended up making a big difference:

Both Texas and West Virginia drove into the end zone on their first possessions on Saturday. No player got off to a better start than UT freshman Bijan Robinson. Starting for the third time, Robison took off for a 54-yard run on the game’s first snap.

Robinson had rushed for 181 yards over his first five appearances of the season. On Saturday, he ran it 12 times for 113 yards. He also picked up 35 of his 38 receiving yards on a game-sealing reception in the fourth quarter.

West Virginia arrived in Austin with the Big 12’s best run defense (97.8 yards per game). Oklahoma State had been the only team to have its leading rusher top 70 rushing yards against the Mountaineers.

Texas entered halftime with a 10-7 lead, but West Virginia tied the score on the first possession of the second half. Texas then quickly responded to West Virginia’s response. Driving 65 yards over just seven plays, Texas regained its lead when Sam Ehlinger bought time due to a key block by Christian Jones and fired a 33-yard touchdown pass to Jake Smith.

In addition to Smith, Brennan Eagles also hauled in a 17-yard pass on the possession. The receiver who made the biggest play on that trip down the field, however, was Joshua Moore. Midway through the drive, Moore jumped on a ball that Robinson fumbled at the end of an 11-yard run. Moore is UT’s leading receiver, but he was shut out for the second time this season. Moore’s one reception last week resulted in the only touchdown in the overtime session of a 41-34 win at Oklahoma State.

Down 17-10, West Virginia picked up a first down at the Texas 9 near the end of the third quarter. After gaining a yard on first down, West Virginia went to the air. WVU quarterback Jarret Doege found Winston Wright, but the receiver juggled the football before he seemingly completed the catch near the back of the end zone.

On the field, it was ruled that Wright had scored a touchdown. After a review, that call was overturned and West Virginia no longer had the lead.

West Virginia still had another shot to score. On third down, however, linebacker DeMarvion Overshown blew through the offensive line and took down Doege for a 9-yard loss. The Mountaineers settled for a 34-yard field goal.

Now trailing 17-13, West Virginia marched into the UT red zone in the fourth quarter but stalled short of the end zone. Facing a 4th-and-1 at the Texas 16 with under 12 minutes to go, West Virginia kept its offense on the field.

Leddie Brown is counted among the best running backs in the Big 12, but Doege took the fourth-down snap out of the shotgun and immediately looked to pass. Doege lofted a pass to tight end Mike O’Laughlin in the end zone. UT defensive back B.J. Foster, however, caught up to O’Laughlin and knocked the football out of his hands.

With its deficit remaining at four points, West Virginia was once again prepared to enter the UT end zone. Doege found Brown for a 7-yard gain on a third-down attempt at the Texas 15, but Texas cornerback Josh Thompson upended Brown a yard short of the first-down marker.

Doege did fake a handoff to Brown this time, but he pulled the ball and fired it into the end zone. Doege had a target in Ali Jennings, but the sophomore receiver was closely defended by Texas safety Chris Brown. West Virginia wanted a flag thrown on Brown, but no call was made and the Mountaineers turned over the football on downs. With 4:44 left, Texas ran out the clock and secured the win.

‘Work in progress’: No. 21 Texas logs another mixed performance with its third straight win