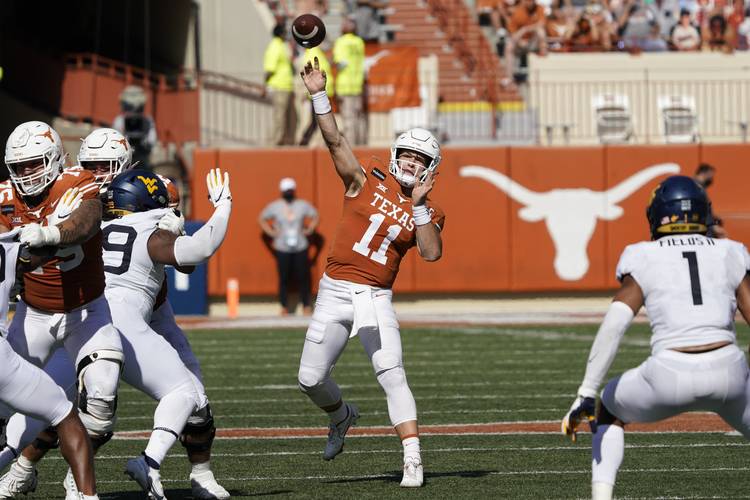 Texas’ passing game is flashing something akin to the Check Engine light.

It is serious? Is it nothing? Everything sounds OK, and the car has driven the 21st-ranked Longhorns to three straight victories. Still, it’s worrisome enough to look under the hood, change the oil and check the air filter during UT’s bye week.

Quarterback Sam Ehlinger has thrown five touchdowns over the last two games even though his overall production level, compared to the norm, was down. Joshua Moore went from catching eight passes against Oklahoma to just one against Oklahoma State to none against West Virginia.

Grad transfers Brenden Schooler and Tarik Black couldn’t come up with big potential catches in crunch time against WVU. Jordan Whittington was sensational against OU but has since been injured. Jake Smith was stopped by a hamstring injury, but now he’s getting back into a groove.

Asked Monday whether it was the receivers or the quarterback, Texas coach Tom Herman said, “I think it’s all of the above.”

“This is a throwing offense that, with the same pieces, had a lot of success,” Herman continued. “We hit a wall this past game against the No. 1 defense in our conference, a defense that was top 10 in the country in four or five of the very important statistical categories.”

On Saturday, Herman said the passing game was “not pretty. Not at all.” On Monday, he acknowledged it needs to be better. “That’s going to be a point of emphasis this this off week,” he said.

So how does an offense that threw for 481 yards against UTEP hover in the mid-200 yard range over the next four games? Texas threw for 169 yards in an overtime win over Oklahoma State and 184 against West Virginia.

Texas (5-2, 4-2 Big 12) has a revolving-door approach at receiver. Smith has gotten the most targets the last two games (14). Tight end Cade Brewer got five targets against OSU and none against WVU. Schooler and Black had just two catches on six targets against the Mountaineers.

Ehlinger is either regressing as a senior or he’s playing through some real pain — the latter being an obvious possibility, of course. He completed 47.2% of his throws against TCU on Oct. 3, an outlier of stats because the Horned Frogs have always given Ehlinger fits. His second- and third-lowest career completion percentages were against TCU.

But Ehlinger’s 52.9% completion total against the Cowboys was noticeable. Then he completed just 48.4% of his throws against the Mountaineers, the fourth-lowest percentage of his career. “I think I’m trying to be too perfect. I need to just go out and let it rip,” he said after the WVU win.

He underthrew some deep balls but did hit Smith on a terrific 33-yard touchdown pass. The longest pass of the day — a 35-yarder to Bijan Robinson — was a toss into the left flat and Robinson did the rest. Robinson was named the Big 12 newcomer of the week on Monday for his efforts against WVU.

“I think we’ve got to be real attentive to detail on our landmarks and where we’re trying to complete those balls,” Ehlinger said. “I’ve got to continue to work giving them a chance. And then we’ve got to go make plays and attack the ball in the air.”

Asked if playing through pain would ever be detrimental, Ehlinger said, “The natural breakdown of the body throughout the season is a natural progression. But the bye weeks come in at a perfect time. Let’s just say that.”

Herman has never given reporters any specific injury information on Ehlinger. But he also has a history of keeping quarterback injuries close to the vest, for obvious reasons.

Herman also brushed off a question about whether it might be smarter to let him sit and rest against Kansas (0-7, 0-6) on Nov. 21. Backup quarterback Casey Thompson has played in only one game this season. He was 4-for-7 for 55 yards during mop-up time against UTEP.

Every Big 12 game has been tight for Texas, thus not allowing any time for Thompson to get in the game.

“He’s a captain, a leader and a guy that’s won a lot of ballgames for us,” Herman said of Ehlinger. “So I’m not exactly sure what he would need to heal from. I think he’s going to be heading into this three-game stretch as healthy as he’s been in a while.”

To be sure, West Virginia was the best defense in the league, statistically speaking. The competition is going to drop off from here on out. Kansas ranks eighth in the league in pass defense, Iowa State is seventh and Kansas State is sixth.

Texas’ pass efficiency may get better, and perhaps that dashboard light goes off on its own.

For Jordan Spieth, no better place to end the grind than Augusta National