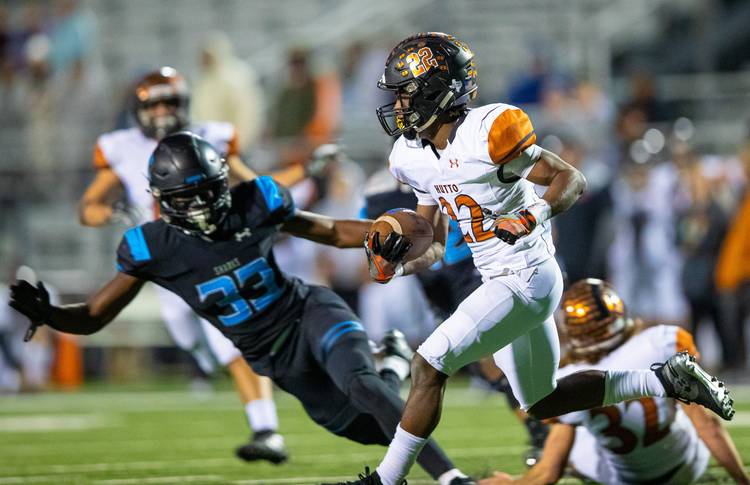 The Longhorns haven’t added a commitment to the 2021 recruiting class since three-star offensive tackle Max Merril pledged on Sept. 25. Texas hopes that changes Saturday when outside linebacker Terrence Cooks is scheduled to announce his college decision. Cooks, a 6-2, 210-pound three-star from Alvin Shadow Creek, lists a top four of Texas, Baylor, LSU and Georgia.

Texas has been the long-time leader for Cooks, who visited UT back in February for a junior day before COVID-19 concerns forced the NCAA to restrict on-campus visits. He holds 36 offers and ranks 44th on the Fabulous 55. He’s one of seven prospects on the list to remain uncommitted. The senior is the 20th-ranked outside linebacker and No. 302 in the nation, according to 247Sports’ composite rankings.

Cooks bounced around early in his prep career, attending Houston Christian as a freshman and then Fulshear as a sophomore. He found a home at Shadow Creek as a junior, helping the Sharks claim the Class 5A Division I state championship over Denton Ryan. He was a second-team all-district selection as a junior, finishing the season with 72 tackles and three forced fumbles.

The key for Texas in landing Cooks might be current UT freshman Xavion Alford, who was teammates with Cooks at Shadow Creek in 2019.

“Xavion is my boy and is in my ear. He’s like my family and I can trust him,” Cooks said. “He’ll play a factor in my school.”

Cooks would be the second linebacker to pick Texas, joining four-star Arlington Martin product Morice Blackwell. The Longhorns signed three linebackers in 2020. The 2021 class currently consists of 17 members. It ranks 17th in the nation and second in the Big 12, trailing Oklahoma.

Texas has offered four linebackers for 2022:

Medlock began his prep career at DeSoto before moving to the Houston area and enrolling at Manvel before his sophomore year. His sophomore season finished in a first-team all-district selection after recording 117 tackles, including eight tackles for loss and three sacks. The Buckeyes are considered the early favorite.

Johnson plays next to Morice Blackwell, a four-star Texas commit, at linebacker for Arlington Martin. His play last year caught the eye of the defensive staff, earning an offer on Nov. 1. Johnson was a second-team all-district selection as a sophomore after registering 99 tackles, including 12 for loss. The Longhorns hope that Johnson’s relationship with Blackwell helps lure the three-star junior to Texas.

Perkins is the highest-rated linebacker in the state for the 2022 class. He’s a national top-100 prospect in his cycle, checking in at No. 30 overall according to 247Sports’ composite. Perkins arrived on the scene as a sophomore, earning District 14-6A defensive newcomer of the year honors. He’s a versatile player who ended the 2019 season with 46 tackles, including nine for loss and four sacks, as well as seven pass breakups and an interception returned for a touchdown.

Harris flew under the recruiting radar heading into his junior season because the three-star lacked varsity tape. He was forced to play junior varsity as a sophomore following a transfer from Conroe Grand Oaks. Oklahoma offered on Oct. 12 with Arizona State following on Nov. 2.