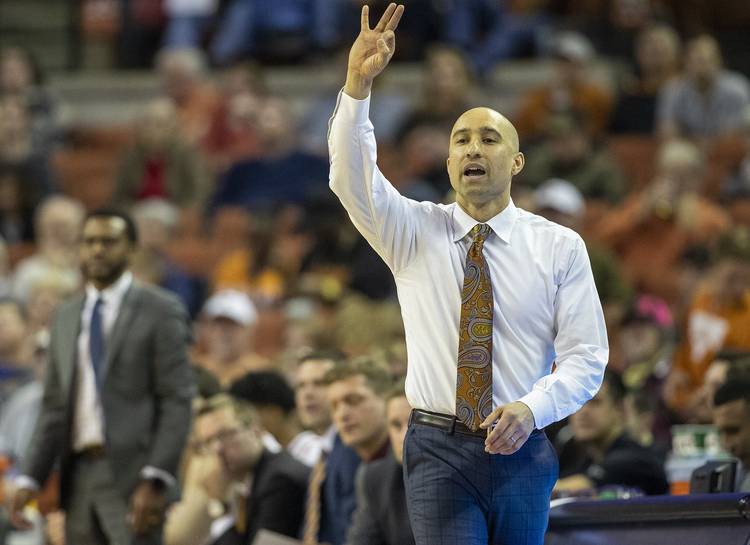 Texas coach Shaka Smart has signed the No. 3-ranked recruiting class in the Big 12 for 2021, according to 247 Sports. [Ricardo B. Brazziell/American-Statesman]

The Big 12 remains one of the premier conferences in college basketball.

All are ranked in the top 10 on KemPom.com, an analytics website, entering the season. And as the early national signing period began Wednesday, the conference was poised to remain in the national spotlight.

Baylor landed the start of a star-studded class. Kansas began piecing together another loaded class with an eye toward more in the spring. Other teams improved. However, it’s unclear how much of an early impact this recruiting class can have after the NCAA recently granted an extra year of eligibility to all players.

Baylor is built to last

The Bears enter this season as a national championship contender, and that’s led to a boom in recruiting for coach Scott Drew. Baylor landed the only five-star recruit in the conference — Sunrise Christian (Kansas) small forward Kendall Brown — and two talented four-star recruits to round out a roster that could still feature premier talent even with Jared Butler, MaCio Teague and Mark Vital set to depart (if they choose to forego an extra year of eligibility). Baylor’s recruiting class is ranked No. 5 overall by 247 Sports.

Coach Shaka Smart’s efforts to rebuild the Longhorns are again in the spotlight, especially with the uncertainty of a veteran roster returning next season. Texas has six seniors and four juniors. Even though every player has the option to play another season, there is no guarantee the veterans will stay. Plus, freshman Greg Brown III could be a one-season star. That leaves lots of possible holes for Smart to fill and is why he’s loading up on talent with four players expected to sign Wednesday.

The Jayhawks and coach Bill Self appear to be struggling to land top targets as the pending NCAA investigation looms over the program. Kansas has a decent start with four-star forwards KJ Adams and Zach Clemence, who is expected to sign later this week. But neither are the prototypical one-and-done stars the Jayhawks tend to land. Self and Co. simply want more, but the NCAA investigation makes the road bumpier. It might take a trip to the junior college level after the early signing period to bolster the class.

Oklahoma State made waves last season signing a top-10 recruiting class that included the nation’s top player in Cade Cunningham. The Cowboys have been shut out entering the early signing period. They’ve made the final lists for multiple players — including in-state stars — but have come up empty. Coach Mike Boynton is a tireless recruiter, but with the COVID-19 pandemic ending in-person recruiting, he has yet to find the right player. He’s showing patience while eyeing the spring signing period.

Here is a look at each class:

1. Baylor: July was a big month for the Bears, who continue to shine in all areas under Drew. They landed Kendall Brown alongside four-stars Langston Love and Jeremy Sochan, a European star. Drew could use the spring to plug holes as it becomes clear who stays and who goes from a veteran roster.

2. Kansas: The Jayhawks are off to a solid start with the expected signings of talented Texas natives Zach Clemence and KJ Adams. They still could land four-star guard Trey Alexander from Oklahoma City’s Heritage Hall. If he goes elsewhere, Self will look to fill holes in a myriad of ways — high school, junior college or transfers — in the spring.

3. Texas: The Longhorns need numbers. Coach Smart is off to a solid start signing a class of four, including three players ranked in the top 150. Four-star shooting guard Tamar Bates of IMG Academy is the top of the class.

4. Oklahoma: The Sooners and coach Lon Kruger’s efforts for a monster class took a hit when five-star power forward Daimion Collins chose Kentucky. But OU still has the makings of a strong class with the additions of four-star shooting guard C.J. Noland of Waxahachie and three-star point guard Bijan Cortes, a local star from Kingfisher High.

5. Iowa State: Point guard Tyrese Hunter is locked up and could be a steal for coach Steve Prohm as an explosive athlete likely to earn significant minutes early. Heading into the spring period, the Cyclones remain in the hunt for a handful of high school stars, including five-star combo-guard Hunter Sallis.

6. Texas Tech: Red Raiders coach Chris Beard has built his roster with talented recruits but also a plethora of impressive transfers. That could lead to a loaded roster with little room for freshmen next season. But Beard still found a strong four-star forward in Plano native Jaylon Tyson.

8. TCU: The Horned Frogs haven’t landed a high school recruit, but they signed the best junior college big man in the class. Souleyman Doumbia, a 7-footer from Navarro (Texas) College who overcame being trafficked from Africa, could provide depth in the post or step in for Kevin Samuel, should he leave to go pro.

9. Kansas State: The Wildcats have a young roster with only three upperclassmen, but that hasn’t slowed coach Bruce Weber from landing a possible steal. Kansas State signed 6-10 center Logan Landers, who committed recently despite offers from Kansas, USC and others. He also reclassified to the 2021 class.

10. Oklahoma State: The Cowboys are not signing anyone in the early period, the result of a roster likely to have little turnover outside of Cade Cunningham departing for the NBA. The expectation is nearly every current player returning after the NCAA granted an extra year of eligibility.

1. Kendall Brown (247 Sports: No. 12): An extremely athletic 6-foot-8 wing, Brown will fit Drew’s system well. Brown will still need to improve his long-range shooting, the one weakness to this point. College choice: Baylor.

2. Langston Love (247 Sports: No. 31): Love, in his second season at Montverde (Florida) Academy, is a tough guard capable of making open shots and rebounding well for his position. College choice: Baylor.

3. Zach Clemence (247 Sports: No. 41): Another Sunrise Christian star headed to the Big 12, Clemence is a versatile forward capable of developing into a star. College choice: Kansas.

4. Tyrese Hunter (247 Sports: No. 49): Guards have thrived under Prohm, and Hunter could be the next. He attacks downhill and gets others involved, but he needs to improve his shooting. College choice: Iowa State.

5. Jaylon Tyson (247 Sports: No. 51): Ranked as the ninth-best small forward in the country, Tyson is coming off a season in which he led John Paul II (Texas) High to a 40-1 record and state championship. College choice: Texas Tech.