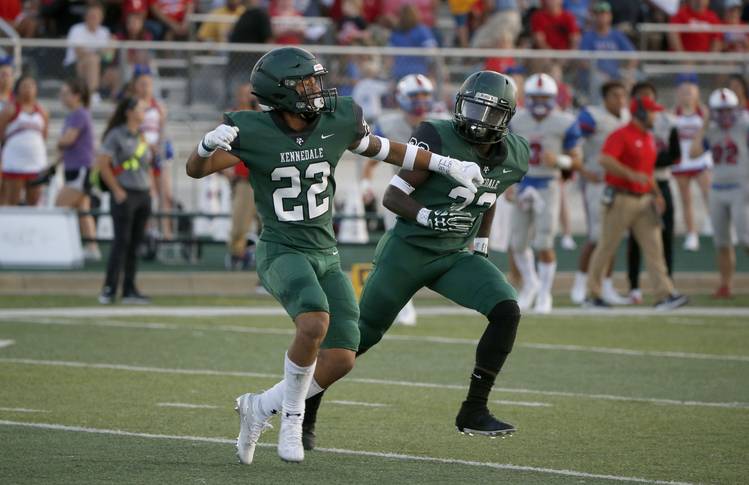 As if 2020 wasn’t confusing enough, the state playoffs begin Friday night for teams in Class 4A and below. Class 5A and 6A schools are still in their regular season. Texas’ 2021 recruiting class consists of 17 members. Eleven of those players are from Texas, and two of those 11 are set to play in a playoff game on Friday night.

After a tremendous regular season, three-star running back Jonathon Brooks should be knocking on a fourth star. The senior helped lead Hallettsville to a district title, rushing for 1,571 yards and 29 touchdowns.

Brooks, who committed to Texas in May, currently ranks as the 27th-best running back in the 2021 class on 247Sports’ composite ratings.

Hallettsville hosts a bi-district game against Little River Academy in the Class 3A Division I bracket. The Brahmas compete in Region III. Brooks helped Hallettsville clinch a district title two weeks ago, rushing for 299 yards and six touchdowns against Columbus to win District 12-3A for the first time in his career.

Hallettsville beat Hitchcock last week to close out the regular season with an 8-2 record, including a perfect 5-0 inside district play.

Brooks was a first-team all-district selection as a sophomore and the district MVP as a junior. He’s likely to be named MVP again as a senior after eclipsing his junior year stats. He is focused on his team, however. He and his teammates were knocked out in the state quarterfinal in 2019. One more win would put Halettsville one win away from the state title game.

“He’s an amazing runner,” said Hallettsville coach Tommy Psencik. “The thing I’m most proud of is he’s gotten into becoming more of a leader for us. He’s really stepped up and matured as a leader. He’s been fun to be around.”

Four-star safety JD Coffey and his Kennedale teammates host Brownwood in the bi-district round of the Class 4A Division I playoffs. Kennedale won its district and is among the early favorites in Region II. Kennedale will take on the Melissa-Dallas Carter winner if it beats Brownwood to advance to the area round.

Coffey, a four-year starter, has accomplished nearly everything in his prep career except play in a state title game. He was an Associated Press first-team all-state selection in Class 4A as a freshman. He was a first-team all-district selection as a junior, and his district’s defensive MVP as a junior. Coffey, who is the third-highest ranked commitment in Texas’ class, entered his senior year with 198 tackles and 14 interceptions.