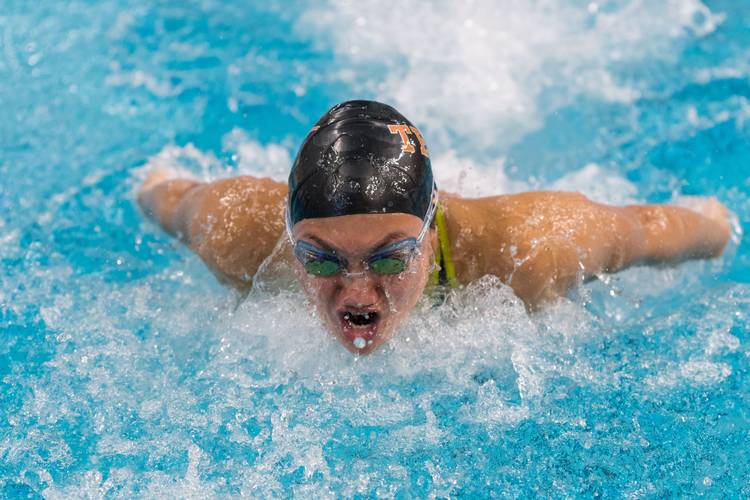 Former Texas swimmer Remedy Rule, shown competing in the 2018 Big 12 championships at the Texas Swimming Center, is one of approximately 300 athletes — including several Longhorns — who have been competing in the International Swimming League’s second season in Budapest. [C. MORGAN ENGEL/USA TODAY]

After a day of training, Remedy Rule takes a seat in a Hungarian hotel room around a collection of her teammates. In the weeks since they’ve moved into a shared building, the women occasionally meet here, enclosed by walls patterned with shapes resembling the arrangement of a giraffe’s spots.

They share stories and thoughts while taking turns using a compression therapy system owned by one of the athletes. The latest version of the NormaTec product, which adds pressure to the legs to speed up the body’s recovery process, is listed at $995. Rule refers to it simply as a pair of “giant pants.”

The gathering is one of the more intimate interactions Rule has enjoyed since arriving in Budapest last month. Such is the reward for carrying the occupation of professional athlete during a pandemic.

Rule, a former Texas swimmer who graduated in 2019, was one of approximately 300 athletes — including several Longhorns — invited to compete in the International Swimming League’s second season. The organization spent months attempting to return despite the COVID-19 outbreak. The result of those logistical concerns is a “bubble” housing the ISL’s 10 teams, coaches and staff members on Margaret Island in Hungary’s capital.

“It’s really awesome being surrounded by so many professional athletes all on the same level,” Rule said. “And (it’s) just cool learning from other people that are similar to you, that’s been really beneficial.”

The majority of athletes arrived Oct. 10. Rule came a bit later, but not before acquiring a negative COVID test. League rules for entering the bubble called for each swimmer to test negative before traveling, test again once in Budapest, wait in their assigned room until the result came back and then, if permitted based on the outcome, continue to get tested every five days.

Two hotels divide the competitors with each individual occupying their own room. Buses transport the athletes between the hotels and the nearby Duna Aréna to train and swim. A hospitality staff washes their laundry and prepares three free buffet-style meals per day.

It poses the question: Is it a bubble — or a swimmer’s utopia?

When Rule goes to the dining area with her team members, they’re required to keep their distance while eating. She still laughs at the purposefully uncomfortable configuration of tables, equating the experience to being on “an awkward date.”

Leah Gingrich, a Longhorn from the class of 2012, is a teammate of Rule’s for the DC Trident. Following her graduation from UT, she spent six years away from competitive swimming before reviving her career two years ago.

Her path to Budapest was more turbulent than that of her counterparts. Gingrich wasn’t even a member of the ISL until she received an offer to join the Trident one month before the events were scheduled to begin.

“The ISL and the team and the managers here, they were really great at just letting me know what it was going to be like,” Gingrich said. “I had to just accept the fact that there are a lot of unknowns and we don’t know what’s going to happen when we get there, but it could potentially be the best experience of my life.”

The ISL, which has five teams based in the U.S., four in Europe and one in Tokyo, has established itself as a unique option for professionals and an alternative to the individual Olympic training many begin after their college careers. Each ISL athlete will receive $15,000 for their participation this season. Additional incentives can be earned based on meet performances.

The league reached a multi-year broadcasting agreement with CBS Sports in September, providing television and streaming coverage of the five-week event. Since beginning in 2019, the ISL has expanded, adding two more teams prior to this season.

Among Rule and Gingrich in the bubble are former Longhorns Tate Jackson and Townley Haas of the Cali Condors and Will Licon and Maxime Rooney of the LA Current.

Jackson, who also competed in the ISL last year, claims the Condors have the best team chemistry of any club.

“I think that comes from a majority of our program coming from the NCAAs,” Jackson said, “so if you came from a college team in a college environment where team is such a big thing, you transition really well to the ISL, where, instead of representing the Longhorns, now I’m representing the Cali Condors.”

Each team has a COVID marshal from Hungary working with athletes and coaches to enforce distancing and mask-wearing. A woman named Flora holds that designation for the Condors.

A failure to wear a mask or wear it properly results in the deduction of one team point. If an athlete returns after the daily 90-minute allocation for roaming Margaret Island, deductions can vary from two and four points based on how late someone is. Jackson was told hugging, deemed a lack of distance between athletes, would also result in a loss of points.

Jackson said Flora hasn’t subtracted any points from the Condors, but she guided the team on a bus tour around Budapest, sharing her favorite locations and the city’s history in the nature of a chaperon for a group of summer campers.

One marvel of the city is the only location the swimmers are spending as much time as their hotel rooms: the Duna Aréna. Jackson compared it to his favorite pool at Stanford’s Avery Aquatic Center because of the vast pool space. The arena regularly holds 5,300 spectators — twice the capacity of the Texas Swimming Center in Austin — in view of its two long course pools, diving pool and short course training pool.

Jackson called it “the nicest facility” he’s ever been to.

The pools have been kind to the Condors. The club was leading the league standings through the first eight matches. Jackson helped propel his group last Friday to a second-place finish in the mixed 400-meter freestyle relay.

Two matches remain before the semifinals begin this weekend. While Jackson, Haas and their teammates are a favorite to win the ISL’s top prize, the Trident was the first team officially eliminated from competition since the club has a bye during the final week of preliminaries.

In anticipation of their time in the bubble ending soon, Trident swimmers were told before their final match to choose their preferred dates to fly home.

Rule said she’ll be sad to leave Hungary and the new connections she’s built. Before coming to the bubble, she became sick and considered skipping the season entirely. She’s now thankful she chose to compete.

“Considering I was thinking of not even coming,” Rule said, “I’m really proud of how I’ve done and how I’ve handled myself and just my mindset, knowing all I can do is my best — and my best is enough.”

While reflecting on the fading moments in her hotel room, over 5,000 miles from home, one quote came to Rule’s mind:

“How lucky am I to have something that makes saying goodbye so hard?”