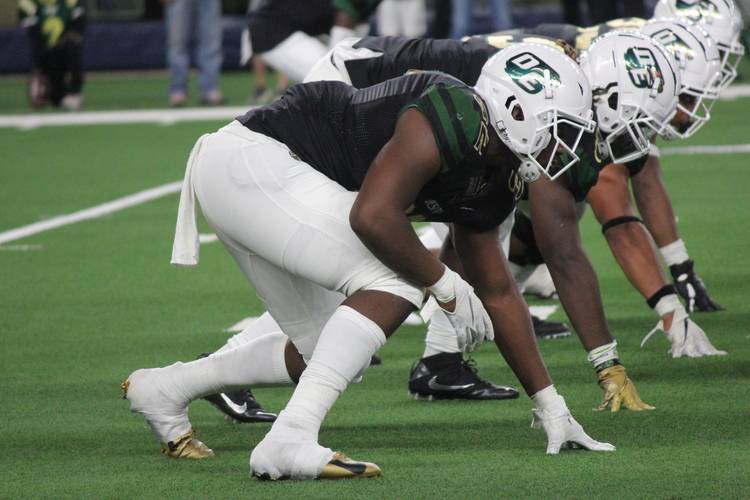 The Longhorns added a commitment Saturday when four-star outside linebacker Terrence Cooks became Texas’ 18th pledge of the 2021 recruiting cycle. The class ranks 17th in the nation and second in the Big 12. Tom Herman’s program can inch toward a top-10 class by landing a handful of remaining targets:

Texas was the favorite to land Johnson heading into the season, but Texas A&M has lapped the Longhorns thanks to a strong start coupled with some early struggles for UT. The form of Texas A&M running back Isaiah Spiller gives head coach Jimbo Fisher an example of how Johnson would be used if he chose the Aggies. Herman hasn’t had a 1,000-yard rusher yet as a head coach.

Johnson was the District 17-6A newcomer of the year in 2018 as a sophomore and an all-state selection as a junior. He entered his senior season with 3,090 career rushing yards and 57 touchdowns. He’s also a solid receiver out of the backfield. Cy-Fair is currently ranked in the top 20 of Class 6A. Johnson hasn’t announced when he’ll announce his decision or if he’ll wait until national signing day in February in hopes that visits can happen early in 2021.

Foster’s top four is Texas A&M, Oklahoma, Oregon and Texas, but most see his recruitment as a two-team race between the Aggies and Sooners. I’ll give the Sooners the advantage, but this could change if Foster takes a couple of visits on his own dime before signing. He’s scheduled to announce and sign with a school during the early signing period. His teammate, fellow offensive lineman Hayden Conner, is pledged to Texas.

Byrd keeps his recruitment behind the scenes. Oklahoma and SMU appear to be in a two-team race to land the four-star tackle. He’s an athletic big man with experience playing defensive tackle, too. He’s helped Duncanville reach consecutive Class 6A Division I state championship games. Oklahoma would be the safe bet, but don’t rule out SMU. The Mustangs are playing well, it’s his hometown team and there are connections between the Duncanville and SMU coaching staffs.

Turner is the best defensive prospect in the state left uncommitted. He’s a big-bodied lineman who plays defensive end now, but he could grow into a three-technique defensive tackle. Turner began making an impact at DeSoto as a sophomore when he was District 7-6A’s co-defensive sophomore of the year. He was a first-team all-district selection as a junior. A two-team race is brewing between Texas and Texas A&M with the Aggies holding a slight advantage.

Harmon would be Texas’ third out-of-state receiver commitment. That can be looked at in two ways: Either the Longhorns are doing a great job  identifying talent outside of their borders or they were forced to expand the search because their in-state targets chose to go elsewhere. Harmon is a big, physical receiver who has also played safety as a prep star in Missouri.

Harmon, who is also a basketball player, is great at using his body to box out smaller defensive backs. He caught 35 passes for 429 yards and four touchdowns as a junior, recording 53 tackles and two interceptions on defense. He has 66 catches for 1,278 yards and 14 touchdowns in his three-year career, adding 104 tackles on defense.

The Longhorns want to add Walker to a class that already has defensive ends Derrick Harris Jr. and Jordon Thomas. Walker is more run stopper than pass rusher, possessing a bigger frame than either of those other two commitments in the class. Texas is one of 19 offers for Walker, who attends the same high school in Colorado as Gunnar Helm, a UT tight end pledge.

Walker posted 59 tackles and four sacks as a junior. He entered his senior season with 126 tackles and eight sacks in his three-year varsity career. He earned some playing time as a freshman and is one of the more experienced players in his state. Walker helped Cherry Creek finish 2019 with a 15-0 record and a Class 5A title.