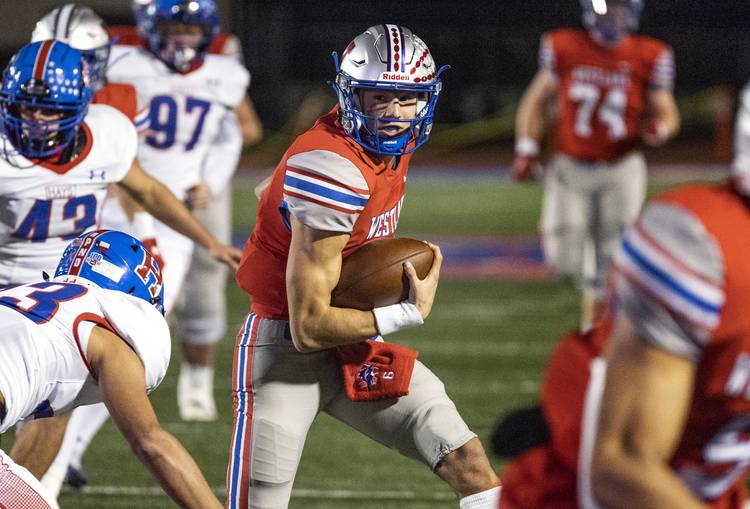 Attention follows success. The adage held true for Austin Westlake prospects Cade Klubnik and Jaden Greathouse. The pair helped the Central Texas powerhouse claim the Class 6A Division II championship last year as underclassmen, and the third-ranked Chaparrals improved to 7-0 this season with a 45-7 win over Bowie last week.

Klubnik, a four-star quarterback in the 2022 class, picked up an offer from the Longhorns late last month. The junior was 14-of-26 for 235 yards and three touchdowns in three quarters of action. He wasn’t impressed with his performance, though.

“I started off tonight with some throws I normally don’t miss, but we just take what the defense gives us and move onto the next play,” Klubnik said. “If you start off (struggling), there is a way to get it back in the right direction.”

“It’s about getting in a rhythm and playing it one play at a time. The hardest part is not doing anything you wouldn’t normally do,” he  explained. “Stay within yourself, complete your task and then do that again.”

Klubnik played occasionally as a sophomore, finishing the year with 680 yards passing and eight touchdowns to just one interception. He ran the ball 48 times for 271 yards and four touchdowns. He’s been the full-time starter as a junior.

“My knowledge of the game and presence in the pocket (has improved),” Klubnik said. “I ran a decent amount last year, but I didn’t need to most of the time. I’m trying to work on staying in the pocket in order to let things develop. I was abandoning the pocket too quickly.”

The goals at Westlake are simple: win district, beat Lake Travis and chase a state championship. Playing quarterback not only comes with expectations; playing the same position at the same school as Drew Brees, Nick Foles and Sam Ehlinger also comes with pressure.

“There is a little pressure because you need to show out,” Klubnik admitted. “If you go out there and relax and play like yourself, it will take care of itself.”

The only new news on the recruiting trail for Klubnik is that there is no news. The NCAA has pushed back the dead period until April.

“I was hoping to get as many visits as possible  after the season and commit by April, but now that’s not possible,” Klubnik said. “I don’t really know what I’m doing. I’m just praying about it and talking to people about it.”

Greathouse, a prep wide receiver that 247Sports lists as a tight end prospect, is one of 27 sophomores in the country with a Texas offer. He caught one of Klubnik’s touchdowns on a 40-yard strike in the third quarter. Greathouse is a grizzled veteran of varsity football and he can’t yet legally drive.

“I’m more mature. I’ve played against these teams and know some tendencies,” Greathouse said. “Also, better film study. Film study is incredibly important and I’ve come to find that out. My speed and discipline is improving.”

The 6-2, 206-pound sophomore is the top-ranked tight end in the 2023 class, according to 247Sports’ composite ratings. He played only wide receiver against Bowie. Texas, Baylor, Oklahoma and Baylor have already offered. He’s the only tight end in the 2023 cycle to hold an offer from the Longhorns. That’s not Greathouse’s main focus, though.

“It is obviously a blessing, but I try not to focus on it too much,” he said. “I’m just out here trying to play great for my team.”

Texas bolsters its No. 4 recruiting class by signing nation’s No. 1 junior college prospect

Kansas’ focus during week off? An area that’s on pace for unwanted history