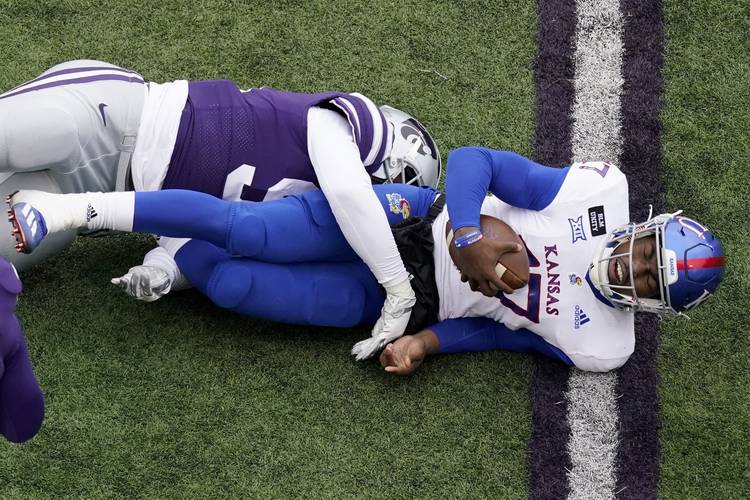 Kansas quarterback Jalon Daniels is sacked by Kansas State defensive end Felix Anudike during the teams' matchup in October. Kansas is allowing 5.4 sacks per game, the highest mark of any FBS team since at least 2009. [Charlie Riedel/The Associated Press]

LAWRENCE, Kan. — Mason Fairchild’s words are both direct and truthful.

The Kansas tight end admits the team worked extra on pass protection during its off-week, and for good reason.

The Jayhawks need to treat their quarterback better.

“We can’t have him running around for his life back there,” Fairchild said Monday. “We’ve got to have him know he’s safe.”

KU has struggled to hit even those low ambitions lately.

The Jayhawks, after allowing nine sacks in their previous game against Oklahoma, have found themselves on a historic pace. Through seven games, they’ve allowed 5.4 sacks per game — the highest mark of any FBS team since at least 2009.

According to CFBstats.com, the next-highest total is 2010 Rutgers, which allowed 5.1 sacks per contest.

KU coach Les Miles expressed some frustration about his team’s O-line play following the Oklahoma game, specifically when talking about quarterback Jalon Daniels, who left in the fourth quarter with an undisclosed injury.

“He got hit a lot of times in that game and we can’t treat our quarterback that way or we won’t have one,” Miles said afterward. “That’s a fact.”

The coach reiterated Monday that blocking was one of the team’s top priorities last week.

“I don’t know that we made a lot of changes, but we focused on those (O-line) guys, how they’re practicing and what’s going on,” Miles said. “And they, in turn … the practice week we just had was a very good practice week: a lot of energy, a developmental thought improvement, and they stayed after it. I’m really proud of how they practiced.”

Fairchild said the team has spent extra periods on pass protection while “just getting the O-line used to twists and turns and everything that a defensive lineman and linebackers can do.”

KU is likely to be most worried about one player Saturday. Texas’ Joseph Ossai has four sacks in seven games, while also leading the Big 12 with 13.5 tackles-for-loss.

Miles left it a mystery as to whether Daniels would be back against Texas; the coach said Daniels worked out some but not extensively during the open week.

“I think we’ll look to his health as this week goes on,” Miles said. “I’m not ready to name him just yet, but I think you’ll find his health will return would be my guess.”

Whether it’s Daniels back there or backups Miles Kendrick or Thomas MacVittie, Fairchild believes KU’s line will play with improved intensity and physicality thanks to its additional prep time.

“I feel like that has gotten tremendously better over this bye week,” Fairchild said, “and I think it’ll show on Saturday.”

‘We’re in the playoffs right now’: For No. 22 Texas, beating Kansas means another step toward Arlington