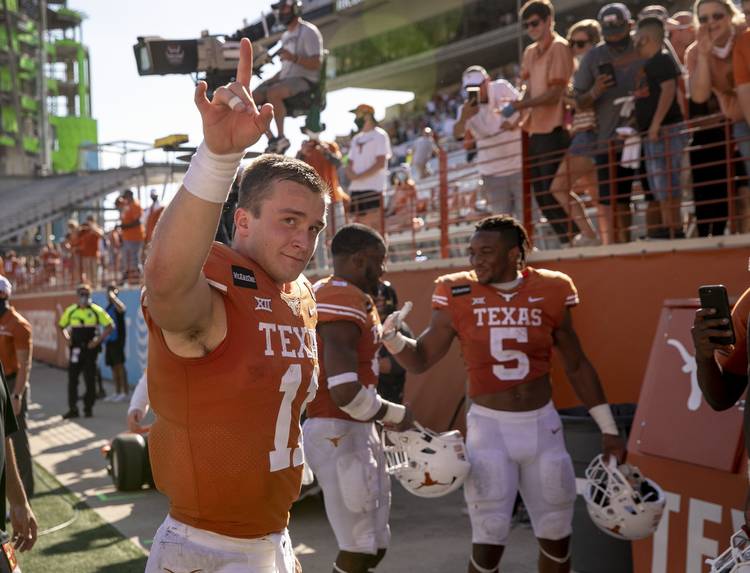 Sometimes, it’s not what you say, it’s how you say it.

For example, nobody asked Texas coach Tom Herman during his weekly press conference on Monday about making the Big 12 championship game. But he noted that the Longhorns are about to embark on “a four-game stretch” to end the regular season.

No. 22 Texas (5-2, 4-2 Big 12) has only three regular-season games left — this Saturday at Kansas, then at home against Iowa State the day after Thanksgiving, then at Kansas State on Dec. 5. If the Longhorns win all three, they will advance to the Big 12 championship game in Arlington on Dec. 19.

What other motivation should Texas need to beat winless Kansas?

“We’re in the playoffs right now,” quarterback Sam Ehlinger said Tuesday. “If we lose another one, we’re out. So we can’t look past anybody. Just when you start taking your eyes off that next game, that’s when things sneak up, and we can’t let that happen.”

Defensive tackle Ta’Quon Graham said the Longhorns are taking the 0-7 Jayhawks “as serious as we do anyone.” Kansas officials announced Tuesday that no fans will be allowed in the stands for the Jayhawks’ final two home games, which includes the Texas game.

“Our road to the Big 12 championship is these next three games,” Graham said. “And I feel like we have taken it as seriously as we can, and I feel like we’re preparing for them just like we would any other team — with all the respect given.”

Most fans will dismiss this weekend’s challenge, pointing to UT’s 2016 stumble in Lawrence as merely an aberration. The Horns are 16-3 all-time against the basketball-centric Jayhawks. The other two losses happened in 1901 and 1938.

Kansas has not beaten a ranked opponent since September 2010. It’s tempting to look beyond this week and focus on the upcoming games against the Cyclones and Wildcats.

“You can’t win them all until you win the next one,” safety Chris Brown said. “That’s kind of how we look at it. You’ve got to take it one game at a time. That’s really what it is. Like, that’s really exactly what it is.

“That’s really the message going around the locker room,” he added. “Be where your feet are at. Execute in the moment. Don’t look ahead. Just be in the moment.”

Texas has piled up a three-game winning streak after a 2-2 start, not that you’d know it by the level of outside noise. Herman went after his critics on Monday, even some Internet reporters who hide behind what he called anonymous sources.

To be clear, no credible media outlet has reported that Herman is in serious danger of losing his job. Of course, at a place like Texas, check back tomorrow — or after the next game. But the speculation about Herman’s job status has hurt the Horns in recruiting, Herman said.

Herman believes the current players can easily turn away from the noise. Still, those same players see it every day on their social media feeds. It gives doomscrolling a whole new meaning.

“It’s certainly a challenge in this day and age to tell everybody to stay off of those things and not listen to anything, everything that they read,” Ehlinger said. “But I think that’s unrealistic to think is going to happen. And so with that being said, I believe there’s got to be a heavy emphasis on focusing on inside this building, what we talked about as a team and what we’re doing on a daily basis.”

Ehlinger noted that at huge schools like UT, there’s a lot of attention on everything.

“That’s where the culture of your program and the tightness of the team has to come before anything that you read online or you hear from somebody at a restaurant or anything like that,” he said.

Graham acknowledged the defense was giving up explosive plays in September. Texas lost to TCU after Keaontay Ingram fumbled on the 1-yard line, and UT fell to Oklahoma in quadruple overtime.

“That was the most frustrating part, losing two games back-to-back and everyone having an opinion that our season was over, this team isn’t even good,” Graham said. “Just hearing all that mess, it just really was frustrating.

“But at the same time, it gave us a chance to reflect on ourselves and see what we were doing wrong,” he added. “What could we do better? What really is the problem because we knew talent was wasn’t the problem.”

The Longhorns tightened up defensively against the run and used the tight ends more on offense. A overtime win at Oklahoma State changed the season’s trajectory, and now the Horns have a clear path ahead of them.

Keep winning, and a Big 12 title game may soon be on the horizon.

But this car will go careening into the ditch if Texas can’t beat Kansas.

“We have an opportunity to build confidence, build momentum, get another one under our belt, and continue moving forward,” Ehlinger said. “We can’t look past anybody.”

Kansas’ focus during week off? An area that’s on pace for unwanted history