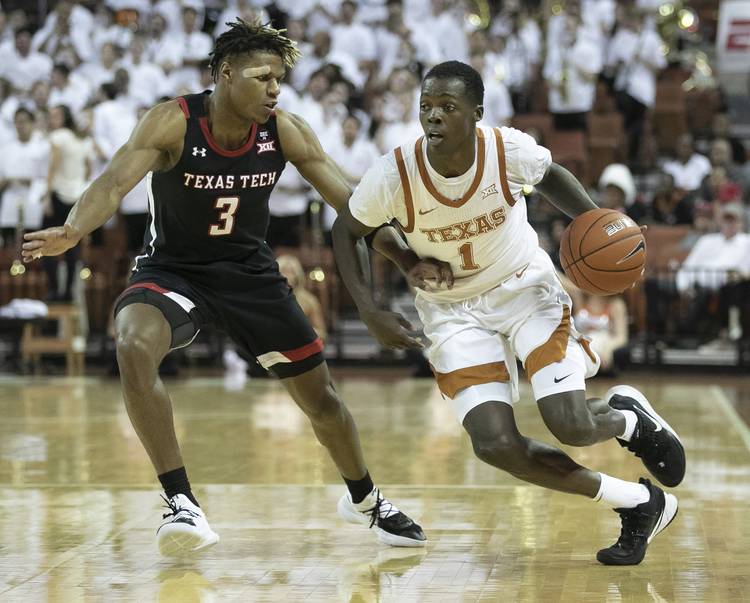 Andrew Jones is entering this season with a green light. The greenest of lights, actually. Texas coach Shaka Smart has practically hung a lantern.

“Andrew Jones, he needs to shoot as much as he possibly can,” Smart said.

Jones has to play defense, too, and force steals. He’s got to attack the glass and help get rebounds. The 6-4 guard must be a team leader in a locker room full of veterans.

Essentially, Jones enters this season focused on Texas basketball after dunking on leukemia. Make no mistake, AJ1 is back full throttle. UT’s season opener is Wednesday against UT-Rio Grande Valley.

“I plan on being that guy, to be a reliable shooter, reliable playmaker and defend for this team,” Jones said. “So, I know I need to step up.

“I know there are a lot of expectations for the team to do well,” he added, “so I just want to be able to do my part and help the team win.”

Jones’ inspirational story is well known to most Texas fans. He was diagnosed with leukemia in January 2018 and missed the rest of his sophomore season. “AJ1” became shorthand for his name and jersey number. He battled his way through Houston’s world-renowned medical community and back toward a normal life.

Last year, Smart began the season unsure of what to expect. Doctors cleared Jones to return, but his capabilities to contribute were unclear. But he wound up playing all season, averaging 26.5 minutes and once again scoring in double figures (11.5 ppg).

Then came the COVID-19 pandemic, which scared Jones and the Texas coaches and medical staff. The disease greatly affects those with underlying health conditions. Not only was there a global pandemic, but Jones needed offseason hip surgery to repair a torn labral.

That injury hampered his explosiveness to the basket, Smart said. The hip is fine, but the pandemic is still here.

“I still have anxiety about the uncertainty of the virus and how it could affect somebody with underlying health conditions,” Jones said. “I’ve taken all the right precautions and follow the protocols necessary in order to stay safe and stay healthy.”

As part of those precautions, Texas will limit the amount of fans allowed into the Erwin Center. For men’s games, Texas expects to allow a maximum of 3,200 season ticket-holders, a source said. The school has yet to formally announce its plans.

Plexiglass has been erected around the scorer’s table, and photographers will not be allowed to sit on the baselines. UT has established strict protocols about who can get into the workout facilities. Media has not been allowed to interview UT coaches and players in person the entire fall; everything is done on Zoom

“So, I’m trusting that everybody around me and facilities of Texas are taking the right protocols, you know, to be selfless, just like I am to try to stop and prevent the spread,” Jones said.

On the court, Jones is part of a tight-knit group of guards with Matt Coleman III and Courtney Ramey. Those three are expected to make up Smart’s primary ball-handling attack all season long.

What’s been forgotten is how Jones got off to a scorching start in 2017 before a wrist injury and his medical diagnosis. He was shooting 46.3% from 3-point range in 10 games and averaging a career-high 13.5 points. He had already been to the NBA scouting combine the previous spring, so Jones had serious NBA aspirations.

Anything close to those numbers would make for a sensational year. At this point, he is listed as a junior on the Texas roster. Every players’ eligibility is frozen this season because of the pandemic, and it’s unclear whether he would return next season.

As for players coming back next season, Coleman said there was talk about it when the NCAA first made its ruling. However, “there hasn’t been a lot of talk about it recently,” he said.

If anyone understands how to make every single day count, it’s Jones.

“We’re really excited to be back playing again, really grateful for the opportunity to be here and be healthy,” he added. “So I’m just going to go out and every night and you know, play my best of ability.”