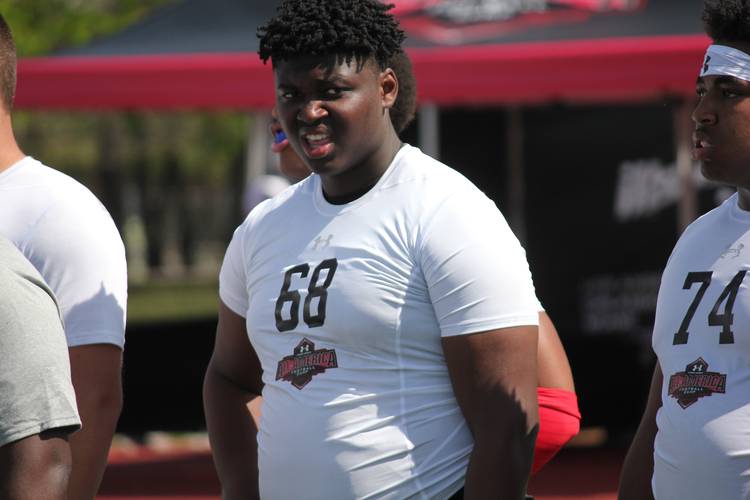 Tom Herman’s 2018 recruiting class is building momentum and now sits at six members heading into May. With the coaching staff on the recruiting trail evaluating talent, the 2019 class also becomes important. Below, we examine each offer extended in the 2019 class.

The number in parenthesis next to each position is the number of offers currently out at that position. The Texas staff has yet to offer a tight end, defensive tackle, linebacker or cornerback in the 2019 class.

Who is Johnson? The four-star dual-threat quarterback is Texas’ top target in the 2019 class and he’s already visited Texas multiple times this calendar year. Texas offered Jan. 25 and is one of 11 current offers for Johnson. As a sophomore, Johnson completed 143-of-232 passes for 2,318 yards and 26 touchdowns to just six interceptions. He ran the ball 250 times for 1,650 yards and 30 touchdowns. The Longhorns are considered the leader, and Johnson fits the dual-threat mold of quarterback Herman and offensive coordinator Tim Beck seemed to prefer at previous stops. Johnson will be a member of the Fabulous 55. He ranks as the No. 3 dual-threat quarterback in the nation, per 247Sports Composite and is the No. 141 ranked national prospect overall.

Who is Cain? Cain is the top running back in his class and a sure-fire five-star talent. Texas offered March 21. It will be tough for the Longhorns to gain footing with Cain unless the talented running back decides to visit Austin over the summer or directly after his junior season. Right now, LSU and Miami are the leaders. Cain is a native Texan. He was a second-team all-state selection at Denton Guyer as a sophomore, and 2017 will be his first season at IMG. Cain was the 5-6A Newcomer of the Year at Guyer as a freshman.

Who is Wease? Texas appeared out of the running for the potential five-star wide receiver from Allen when he committed to Oklahoma. However, Wease de-committed from OU last week and the Longhorns are one of the programs hoping to make up ground. Wease is a tall, speedy wide receiver with elite upside. He was the District 6-6A Offensive Newcomer of the Year after recording 35 receptions for 421 yards and eight touchdowns.

Who is Henderson? Henderson also de-committed from Oklahoma last week and the Longhorns are in good shape for the Houston-area star. Henderson was a first-team all-district selection as a sophomore after grabbing 100 catches for 1,401 yards and 18 touchdowns. He’s not as long as Wease, but he’s a more productive player and is a handful for secondary players after the catch.

Who is Brown? Brown recently committed to UCLA. He finished his sophomore season with 46 catches for 758 yards and 12 touchdowns. He is the son of former Dallas Cowboys cornerback Larry Brown.

Who is Green? Green is the best offensive tackle prospect in Texas regardless of classification. He’d be a top 10 member of the 2018 Fabulous 55 and has routinely dominated older competition at The Opening and Under Armour All-America Camp Series. The LSU commit is big and nasty, the perfect combination for an offensive lineman. Green is committed to LSU, but he’s visited Austin several times, including the weekend of the Orange-White Game. Texas isn’t out of it for Green, but there is work to do before Green thinks about flipping from LSU.

Who is Johnson? If not for Green, Johnson would be the top offensive tackle prospect in his class. Johnson is a long prospect with solid footwork and athleticism for a prep player of his size. Johnson is still growing into his body and will be well over 300 pounds by the time he graduates college. He also gets tested each day in practice by four-star defensive end Joseph Ossai, who holds an offer from Texas in the 2018 class.

Who is Thomas? Thomas is an interior offensive lineman who, like Green, visited Texas for the Orange-White Game despite a commitment to LSU. The Longhorns wouldn’t mind gaining a flip from Thomas down the road and so far, the five-star prospect has been willing to listen to what the new staff at Texas is selling. It is always tough to convince Louisiana talent with a LSU offer to spurn the Tigers, but Herman will give it his best shot.

Who is Thibodeaux? Thibodeaux is the top prospect in the 2019 class, per 247Sports. He holds an offer from nearly every major program in the country and is currently considered a USC lean. He holds 25 offers and Texas’ only shot is to get him to visit.

Who is Stripling? Stripling might be the best in-state defensive end of the 2019 class. Texas offered Feb. 21, but must fight off Texas A&M and Florida for the four-star’s services. Stripling is a big-bodied defensive end with the ability to rush the passer and command the point-of-attack against the run game. Stripling is still growing and could well wind up at over 6-foot-3 and 260 pounds by the time his prep career finishes. He’s priority No. 1 at defensive end for Texas.

Who is Williams? The top player in Texas during the 2019 cycle is the five-star safety from Bishop Dunne. Texas is yet to find footing at the Dallas-area school. Four-star cornerback Chevin Calloway, class of 2017, chose Arkansas over the Longhorns, and the Razorbacks are the current leader for Williams. His athleticism is off the charts, and he’ll remind some scouts of 2018 prospect B.J. Foster. As a sophomore, Williams tallied 75 tackles, eight interceptions and one forced fumble. He scored two defensive touchdowns. His older brother, Rawleigh Williams III, plays running back at Arkansas.

Who is Phillips? Phillips received a Texas offer April 13. His dream school is Georgia, and if the Bulldogs offer, expect the safety prospect to stay home. If not, he already holds offers from Oregon, South Carolina and others. He seems destined to play SEC football, so Texas would have a lot of ground to make up in his recruitment.

Who is Williams? He’s a quarterback in high school, but Williams likely ends up as a slot receiver or in the secondary in college. Missouri, Michigan and Oregon are considered the early favorites for his signature. The 5-foot-10 playmaker is electric with the ball in his hands, but he lacks the size and arm consistency to stick at quarterback.