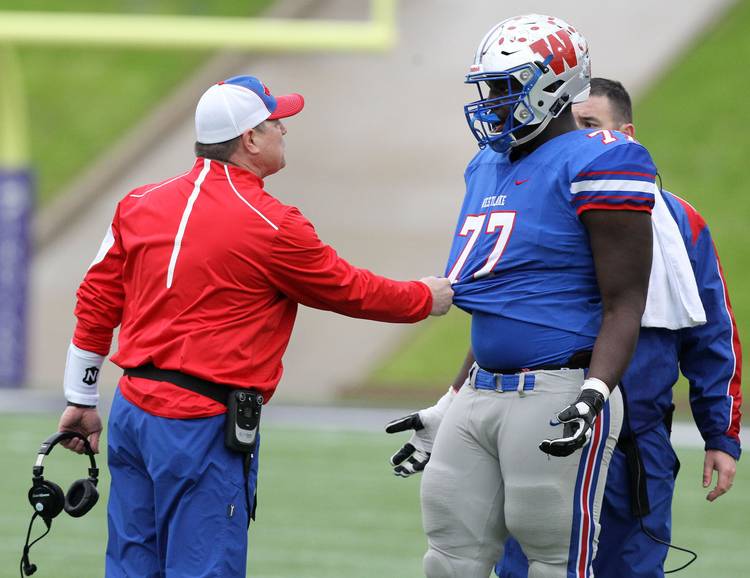 Doing so required talented players, and Dodge finally had one of his top prospects available in 2015. Starting at left tackle for Westlake that night was a junior, Stephan Zabie. He had missed his sophomore season after moving schools. The rust was obvious.

“I think Stephan committed five illegal procedure penalties in that game against Southlake Carroll,” Dodge recalled with a chuckle. “He played well at times in that game, but he was just scratching the surface and figuring out what to do. The talent was there, no question about that.”

The talent blossomed into dominance. Zabie became an anchor to one of the most prolific offenses in the state. The leader of that offense was Sam Ehlinger, who signed with Texas and enrolled at UT earlier this month.

“Stephan is a great football player,” Ehlinger said. “He’s faced a lot of adversity and he’s overcome it.”
The growth was obvious. The same player who committed multiple procedure penalties in the opener started receiving recruiting attention from schools like Oklahoma and LSU by the end of his junior season. At 6-6 and nearly 300 pounds, Zabie would make most college recruiters drool.
“By the time we got to the playoffs in 2015, Stephan was playing tremendous football,” Dodge said. “He grew on the field as much as any player we had that season. I always knew he’d make a great pass blocker because of his athleticism, but he plays the game with passion and aggression. When I saw the way he mentally approached his position, I knew we had a special player.

Westlake entered the 2016 season with high hopes. The Chaparrals were a field goal away from a state championship in 2015 and returned a core nucleus of stars to the offense and defense. Ehlinger and Zabie were to lead the offense, and linebacker Levi Jones would patrol the defense.

It ended up being a year of disappointment.

Before the season, Zabie was dealt another blow. He had repeated the ninth grade after a series of moves and was therefore ruled ineligible by the UIL for his senior year. Westlake appealed, but the ruling was upheld and Zabie missed the entire season. It was the second season in three years he was forced to miss.

“We felt bad for him. We put together the appeal and thought we had a pretty good case given what he’s been through,” Dodge said. “It was a tough deal, but we provided him with a tremendous support system at Westlake and we made sure he knew he was still a part of our team. He had the best academic semester of his career and has put himself in the position to qualify for college. I’m proud of the way he’s responded.”

That response eventually earned Zabie a scholarship offer from Texas. The Longhorns officially extended him an offer on Jan. 16, and Zabie took an official visit to Texas last weekend. Texas is considered the leader to sign him, with Oklahoma recruiting him as well. He’s expected to announce his decision on signing day.

“By mid-December of his junior year, Stephan had 15 offers,” Dodge said. “If you look up ‘upside’ in the dictionary, you’ll probably find a picture of Stephan Zabie. He’s stayed in shape and worked his tail off in the classroom. His best football is ahead of him.”