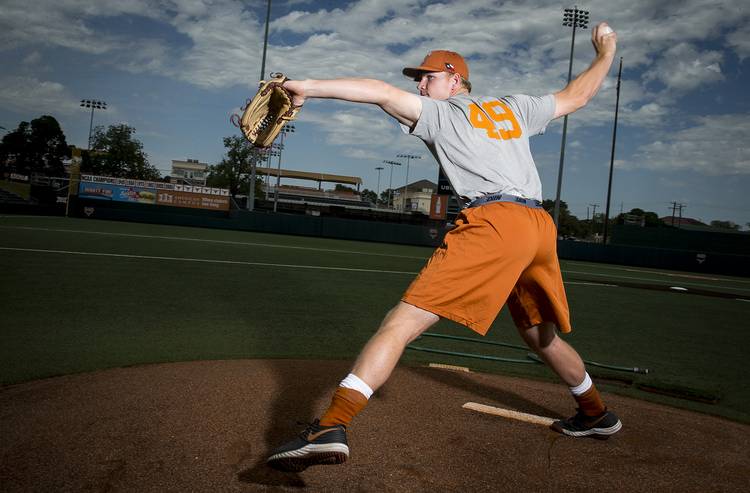 Texas pitcher Parker Joe Robinson has become a reliable reliever for his coach this season, and he attributes it to changing to a sidearm delivery. In 16 1-3 innings pitched in relief this season, Robinson has allowed just four earned runs and 17 hits. Robinson was photographed at Disch-Falk Field in Austin, Texas, on Wednesday, April 25, 2018. NICK WAGNER / AMERICAN-STATESMAN

Parker Joe Robinson is attacking things from a different angle these days.

Texas (29-15, 11-4 Big 12) travels to West Virginia this weekend with the junior pitcher tagging along as a reliable option out the bullpen. In 12 appearances this season, the 6-foot-5 righthander has compiled 19 strikeouts and a 2.20 ERA.

Robinson’s successful spring comes less than two years after Texas overhauled how he threw a baseball.

“I went out over summer ball and got my work in, and next thing you know, I’m getting big innings out of the bullpen,” Robinson said. “It’s fun. It’s always good to be in the games, and I’ve just had a good time with it.”

Robinson’s father, Jeff, played for Augie Garrido at Cal State Fullerton, so his signing with Texas made for a nice story. Robinson, though, made only three pitching appearances in his first two years on campus; he redshirted in 2015 and had a 15.43 ERA in 2 1/3 innings a year later.

After David Pierce replaced Garrido following the 2016 season, Robinson received a phone call. Robinson said he was told by Pierce that a change in his arm slot — or the angle of the arm as a pitcher releases the ball — would be beneficial. Robinson was receptive to the idea.

Pierce, however, was more blunt when asked about that conversation.

“Honestly, I tried to take his scholarship away from him because I didn’t think he could pitch here,” Pierce said.

Pierce, after reviewing film, had pegged Robinson as a “stock righthander … you see those on every corner.” But Robinson convinced his new coach to give him a shot, and Pierce began to instruct him over the phone about making an adjustment to his arm slot. Pierce had made a similar move at Sam Houston State with Alex Bisacca, who’s now playing in the New York Yankees’ farm system.

If Robinson was a clock, he’s now pitching from the 3 o’clock slot. The adjustment was initially tough, but he felt more comfortable by the time fall practices began. Robinson also eventually stopped throwing a change-up and splitter and now just relies on his slider and sinker.

“There were some rough days, but there was also lots of promise,” Robinson said. “There were some days I’d get out there and be like ‘this is perfect, I love what I’m doing.’ Then I’d go out there the next day and it’d be the exact opposite, no clue what’s going on.”

Robinson made seven relief appearances in 2017. His role has expanded this year. During one week earlier this month, he picked up the first two victories of his career as Texas toppled McNeese State and Baylor. Northwestern, Baylor and Texas Southern are the only teams to score against him.

Robinson’s story of redemption is one of many among the juniors in the Longhorns’ bullpen. Josh Sawyer has pitched a team-high 19 times after injuries sidelined him for most of the 2016 and 2017 seasons. Andy McGuire wasn’t on a roster the past two seasons but leads the team with six saves.

“Whether it’s my story, Josh’s injuries or Parker Joe’s working his way into a huge role, I think we’re all kind of realizing hey, we’re able to contribute,” McGuire said. “Just enjoying that, I think, has led to some success.”

Back home in California, Robinson has left a legacy off the baseball field. He went 4-2 during his senior year at San Juan Capistrano’s JSerra High but missed a playoff game after spraining his ankle while dancing at the prom in cowboys boots. Long-time Los Angeles Times sports writer Eric Sondheimer later created “the Parker Joe Robinson rule,” which jokingly forbids Lions players from wearing cowboy boots to the prom.

Years later, Robinson can “still pride myself on my dance moves.”  He has traded in his cowboy boots for dress shoes, though. The arm slot isn’t the only adjustment he’s made at Texas.