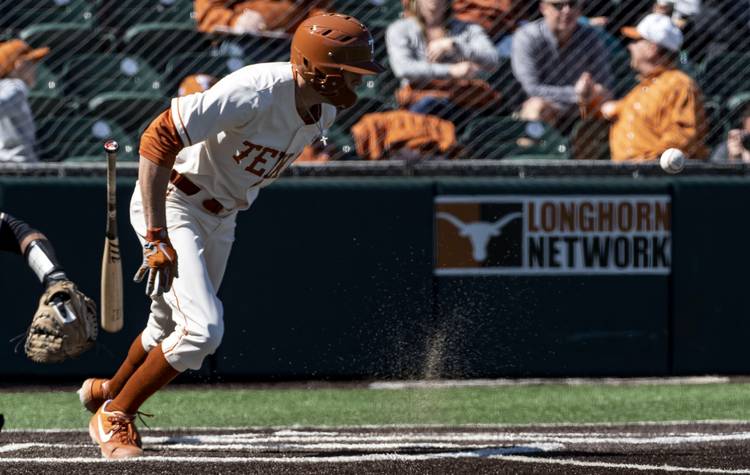 Texas outfielder Duke Ellis, (11) leads off with a bunt against Purdue on Feb. 24, 2019 in Austin. [Rodolfo Gonzalez for AMERICAN-STATESMAN]

Around 8:30 p.m. on Saturday night, Texas sophomore pitcher Matt Whelan received a text message from two of his coaches.

Texas head coach David Pierce and pitching coach Phil Haig had decided that Whelan would start in the finale of UT’s four-game series against Purdue the following day. The start would be the second of Whelan’s collegiate career. And if you thought that would keep him up at night, you’d be wrong.

“I’ve been studying for two exams (that I have) tomorrow, like all weekend, so I’m really sleep-deprived. I didn’t really have too much trouble sleeping,” Whelan said.

Advertisement
Whelan combined with classmate Kamron Fields and redshirt freshman Cole Quintanilla to provide a nightmare for Purdue’s offense. The three pitchers combined for a three-hitter in a 3-0 win at UFCU Disch-Falk Field. It was the first shutout of the season for Texas (6-2), which outscored Purdue 23-12 in a series it earned three wins in.

Following Sunday’s success, Pierce observed that “I thought we had great pitching yesterday and then today we topped that.” Pierce said he went with Whelan because he liked the match-up problems caused by the right-hander’s competitiveness and ability to throw up in the strike zone.

Whelan struck out the first two batters he faced and didn’t allow a hit until Ben Nisle’s infield single in the fourth inning. Having thrown a career-high 59 pitches, Whelan exited after the lead-off batter got aboard in the sixth inning. Whelan had never pitched more than four innings before Sunday. Against the Boilermakers, he gave up two hits and hit two batters.

“I think he killed it,” Texas center fielder Duke Ellis said. “Whelan always impresses me with his motion. He loves to compete and we love playing behind a guy like that.”

Fields relieved Whelan and guided UT for the next three innings. Quintanilla surrendered a hit in the ninth inning, but he struck out three Boilermakers en route to first career cave. Fields and Quintanilla are among the arms in UT’s bullpen that Pierce likes to refer to as “stoppers” instead of “closers.”

“I think the talent off this team is off the charts,” Whelan said. “I think the staff has the potential to do a lot of good stuff this year.”

The 23rd-ranked Longhorns were one-hit in a 4-0 loss to Purdue on Saturday evening. In Sunday’s first inning, Texas had four of its first five batters produce a hit. Using bunt singles by Ellis and Eric Kennedy and run-scoring hits by Austin Todd and DJ Petrinsky, Texas manufactured the only runs of the afternoon.

“Our mood today was just scratch yesterday,” Ellis said. “Come out and compete today and do everything you can to win today. Forget about yesterday. You’ve got to have a short memory for being a baseball player, it’s a hard sport. We just wiped it and competed today.”

Around the bases: A qualifier for the 2018 NCAA tournament, Purdue’s record slipped to 1-6 following Sunday’s setback. … Texas freshman Peter Geib made his first career appearance when he struck out as a pinch-hitter in the seventh inning. … A seventh-inning error by shortstop Bryce Reagan gave UT a fielding blunder in its seventh straight game. Texas committed eight errors in the four-game series. … Senior RHP Matteo Bocchi (0-0; 0.00 ERA) will get the ball when UT returns to UFCU Disch-Falk Field on Tuesday for a game against Sam Houston State.