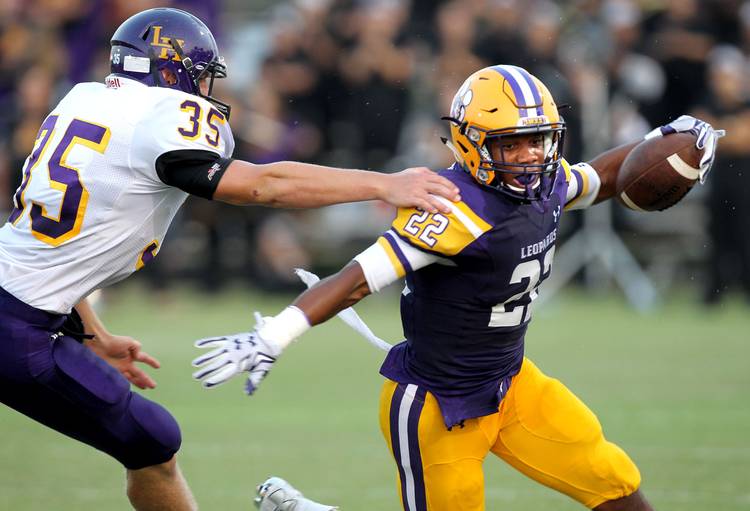 The best player in Texas is heading to Ohio State.

Kennedale’s Baron Browning, an outside linebacker, is the new No. 1 recruit on the American-Statesman’s Fabulous 55 winter updated list of the state’s top prospects. He moved to the top spot from No. 5 on our summer list, showing the versatility required for five-star talents.

The 6-3, 230-pound Browning is a demon off the edge. His combination of speed, size and raw strength makes him the best pass rushing linebacker in the state. And he showed his coverage skills his senior year, moving to cornerback against top-flight wide receivers.

Defensive players dominate the top of the Fab 55. Defensive back Jeffrey Okudah, who was ranked sixth this summer, and Houston Bellaire Episcopal defensive tackle Marvin Wilson, who was No. 1, are second and third overall. Okudah is a long, rangy safety who has more than 30 offers. Wilson is a physical freak of nature, combining uncanny athleticism with an ideal frame for a defensive tackle.

The top-rated offensive player in the state missed his senior season with a severe ankle injury suffered on the first play of the year. But he’s going to Ohio State, too. La Grange running back JK Dobbins is ranked No. 4 and appears to be the best running back talent the state has produced in two or three cycles.

Offensive tackle Walker Little, who recently committed to Stanford, rounds out the top five. A teammate of Wilson at Bellaire Episcopal, Little is rarely challenged at the SPC level. Those two physically dominate the private school ranks, but showed the ability to compete against the top talents in the country by dominating camps last summer.

Westlake’s Sam Ehlinger is the top-rated quarterback in the state and also is the Longhorns’ top-rated commitment, checking in at No. 14. Texas’ top-rated prospect was Liberty-Eylau defensive end Lagaryonn Carson, but Carson decommitted on Dec. 27. Three more future Longhorns fall within the top 30. Recent running back pledge Toneil Carter was ranked 20th, while wide receiver Damion Miller and defensive end Taquon Graham were ranked 24th and 26th, respectfully.

Oklahoma commitment CeeDee Lamb leads a loaded wide receiver position group at spot No. 11. He was the biggest mover since the last update, gaining 22 spots in the final rankings. His senior season gave him a strong argument as best wide receiver in a loaded sate. Twelve wide receivers, the most of any specific position, are represented in the Fab 55.

Two other Texas commits — athlete Montrell Estell and defensive back Josh Thompson — also made the list. That means six of Texas’ 12 commitments are represented on the list.