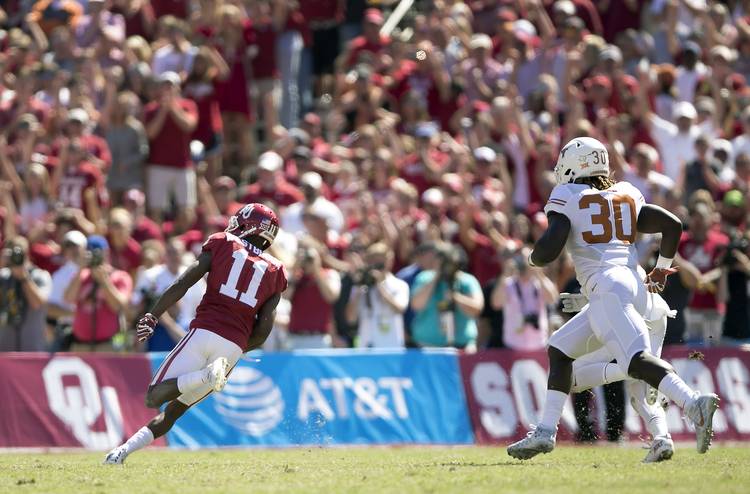 OU wide receiver Dede Westbrook (11) torches the Texas defense for a touchdown in the second half at the Cotton Bowl in Dallas Saturday October 8, 2016. JAY JANNER / AMERICAN-STATESMAN

DALLAS — Dylan Haines knew he sounded like a broken record.

When asked Saturday for answers about why Oklahoma’s Dede Westbrook, a senior wide receiver who ended up in Norman by way of Blinn College, had a record-setting day in the Sooners’ 45-40 win, Haines said the Longhorns had some broken plays on defense.

It was an excuse that could’ve been used at any time over the past month. The Longhorns’ defense has yielded fantasy-like numbers to opposing wideouts over these last three losses:

“I know that’s been said before,” said Haines, a senior safety who intercepted two passes in the loss. “We’re just not finding a way to get our assignments and execute those. Just late in the game, (we had) defensive breakdowns, we just let him run free. We knew he was the guy to stop and we didn’t get that done.”

Westbrook’s 232 receiving yards set a school record, besting the 217 yards that Ryan Broyles had against Kansas in 2011. Westbrook, who starred at Cameron Yoe High School, hauled in touchdown catches of 71, 42 and 47 yards.

On the 71-yard bomb, Oklahoma quarterback Baker Mayfield was able to extend the play long enough for Westbrook to break free from cornerback Davante Davis on a backside post route. And he beat two Texas defenders to a ball thrown down the sideline on his 42-yard score. On Westbrook’s final touchdown, he caught a short slant in traffic and then shook off an attempted tackle by Texas linebacker Edwin Freeman near the goal line.

Westbrook said Texas didn’t show many of the defensive vulnerabilities that he’d seen on film, and “the main thing was I just going to have to go out there and compete with them.” Mayfield, however, said Oklahoma wanted to exploit Westbrook’s speed; the 6-0, 176-pound receiver had been nursing an undisclosed injury in this first part of the season.

“When he’s healthy, nobody can compete with his speed,” Mayfield said. “That’s the thing that I’ve always loved to exploit, the fact that he can outrun people. He’s got the track-type speed, so that’s why I love throwing to him.”

Texas has now given up at least 390 passing yards in three straight games, and Iowa State junior Allen Lazard, who was averaging 15.6 yards per catch before Saturday’s game against Oklahoma State, is up next.

After the game, Texas head coach Charlie Strong said the issues with the secondary — which now has defensive backs coach Clay Jennings as well as discarded defensive coordinator Vance Bedford as its coaches — can be corrected.

“You’ve just got to continue to work on it, and just throw deep balls (in practice),” Strong said. “Just have deep ball after deep ball. Guys just got to get focused and locked in. But then, we’ve got to do a better job of coaching.”