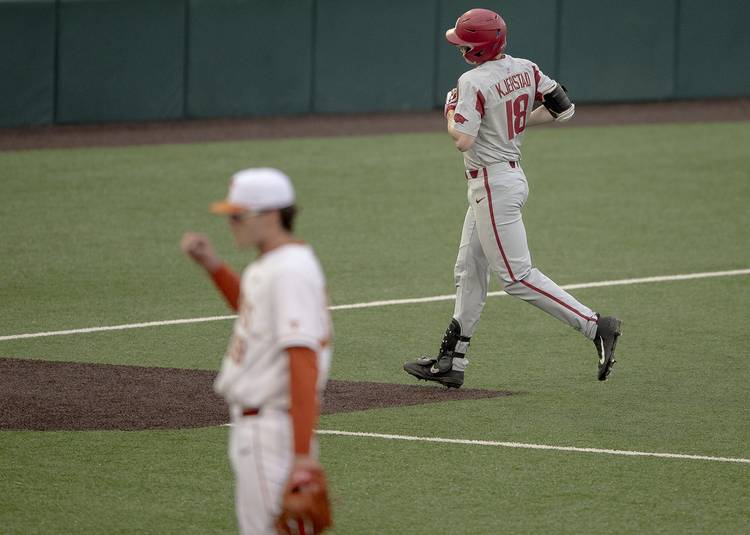 In town for the first time since 2005, the Arkansas Razorbacks supplied the fireworks in Tuesday’s 11-4 blasting of Texas at UFCU Disch-Falk Field.

The seven-run decision in the opener of this two-game series was UT’s fifth straight loss to Arkansas. Texas was beaten three times by Arkansas last year with the last meeting being an 11-5 Razorback win in the College World Series.

Making the first start of his collegiate career, UT freshman Jack Neely needed only five pitches to retire the Razorbacks in the opening inning. Neely’s next inning, however, was nearly eight times as long.

Arkansas led off the second inning with a double, and Dominic Fletcher later scored on an infield single that was misplayed by UT.  The Razorbacks loaded the bases on consecutive walks before Christian Franklin blew open the game with a grand slam from the ninth spot in the batting order. Two batters later, Heston Kjerstad gave his team a 6-0 lead after crushing an offering from Neely.

Facing Neely and reliever Donny Diaz, Arkansas added five more runs over the next two innings. Diaz entered the game with a 0.00 ERA over his four appearances. Neely had not been tied to an earned run over his past three appearances — one of which was an outing at Stanford that lasted 3 1/3 innings — but he saw his ERA jump from 6.23 to 15.63.

“We got off to a really good start offensively. We took some good swings in the first,” Arkansas coach Dave Van Horn said. “We felt like we were going to get to him. In the second inning, I just thought our hitters did a tremendous job of battling. ”

Thanks to a two-run double by Shaw and Caston Peter’s two-run homer, Texas got four runs back in the fourth inning’s bottom half. The Longhorns, though, were held to two baserunners over the final five innings.

Said Shaw: “We punched back (in the fourth inning), but it kind of died right there.”

After the loss, Texas coach David Pierce was not ready to name a starter for the finale of this two-game series. Pierce said that whoever throws on Wednesday will need to attack the strike zone with quality pitches and “whatever they have in the tank, they need to go out there with it and leave it on the field.”

Despite the shaky start on the mound, Pierce will have a few rested arms at his disposal on Wednesday. Owen Meaney threw the final five innings for Texas on Tuesday, and the freshman allowed two hits and one walk.  In 9 2/3 innings this season, Meaney has given up four hits and one run.

“Not only did he eat up five innings to preserve the bullpen and give us a shot to throw quality arms tomorrow, but he was good once he got down in the zone,” Pierce said. “He did a great job of making some early adjustments. That’s what we needed from him, to go out there and compete.”

Around the bases: Tuesday’s festivities drew an announced crowd of 6,208. … Masen Hibbeler, who was named the Big 12’s player of the week on Monday, batted leadoff and was 1-for-3 with a walk. … Freshman Bryce Reagan’s three-inning stint in the field was his first appearance at shortstop since March 9. … Arkansas also did not announce a starting pitcher for Wednesday’s rematch.