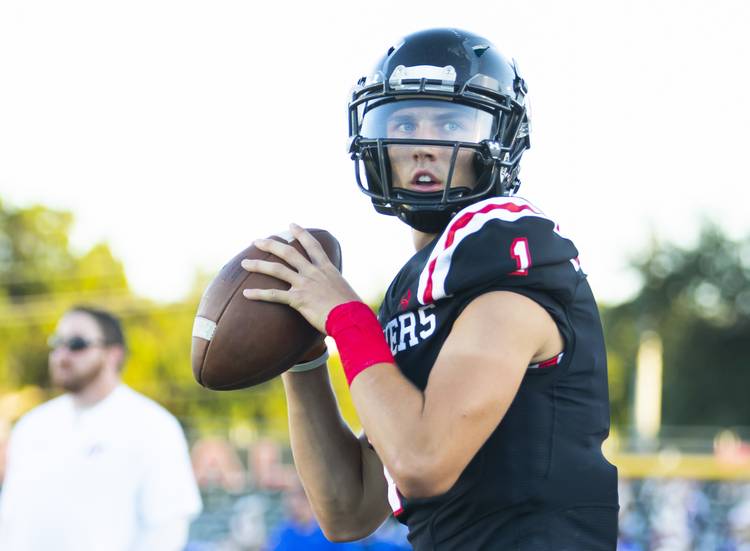 20. Branard Wright, DT, Dallas Carter (4A), 6-3/294, Undecided — Wright is a big-bodied defensive tackle who demands double teams. He’s quick enough to rush the passer and create negative plays behind the line of scrimmage. His strength shows at the point of attack.

19. Drew Sanders, ATH, Denton Ryan (5A), 6-5/211, Committed to Oklahoma — Sanders is a prep quarterback, but he might end up at tight end or even along the defensive line in college. He committed early to Oklahoma.

18. EJ Smith, RB, Dallas Jesuit (6A), 6-0/190, Undecided — Smith comes from great stock as the son of NFL legend Emmitt Smith. EJ brings a great combination of speed, strength and balance to the running back position, and he clearly understands the position with his father overlooking his development.

17. Hudson Card, QB, Lake Travis (6A), 6-2/167, Committed to Texas — Card is a dual-threat quarterback who grew up a Longhorn fan. He was the first member of the 2020 class and led Lake Travis to the regional finals in his first year as a starter at quarterback. He played wide receiver as a sophomore.

16. Courtland Ford, OT, Cedar Hill (6A), 6-6/305, Committed to LSU — Ford is one of a number of elite offensive tackles in the 2020 cycle. The LSU commit is a big, nasty player with a ton of potential. Ford can play left or right tackle.

15. Alec Bryant, DE, Alvin Shadow Creek (5A), 6-3/230, Undecided — Bryant is one of the best edge rushers in Texas. He’s also athletic enough to stand up and play outside linebacker. That versatility is rare. He uses his hands well and closes on quarterbacks and ball carriers in the backfield.

14. Logan Parr, OG, San Antonio O’Connor (6A), 6-3.5/280, Committed to Texas — Parr is a unique interior lineman who can pass block as well as he can run block. He could play offensive tackle if needed, but he best projects to left guard or center. Parr is a big, powerful player at the point of attack and good feet in space.

13. Jaylon Jones, CB, Cibolo Steele (6A), 6-3/185, Texas A&M — Jones looks like a wide receiver at the corner position because of his rare size and length. A move to safety isn’t out of the question if his athleticism can’t translate to the outside in college. Cibolo Steele is known for producing elite defensive backs.

12. Chris Thompson, Jr., S, Duncanville (6A), 6-2/195, Undecided — Thompson spent much of his junior year playing outside linebacker and he projects to an in-the-box safety or a smaller outside linebacker in nickel situations. He’s a hard-hitter with plenty of speed to cover tight ends and running backs in space.

11. Lorando Johnson, CB, Lancaster (5A), 6-0/181, Undecided — Johnson is an athletic freak with elite speed and the ideal frame to deal with big receivers and quicker slot threats. Johnson can play nickel, cornerback or even move to safety. He’s a physical presence on the outside.

Texas 84, Baylor 72: Unhappy with the standings, Longhorns ready to do something about it